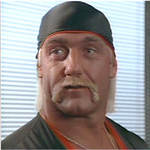 Hogan (whose idol “Superstar” Billy Graham appeared in the infinitely better movie FIST FIGHTER earlier in the summer) basically appears as himself: the big-hearted, beloved by fans and children World Wrestling Federation champion. But he’s not named Hulk, he’s named Rip, and instead of wearing shirts that say “Hulkamania!” he wears shirts that say “Rip ’em!” So it’s like an alternate dimension that’s the same as ours except Hulk Hogan has a different name. Terrible episode of Sliders. END_OF_DOCUMENT_TOKEN_TO_BE_REPLACED