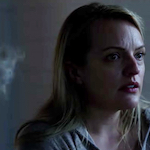 It had me not long after the simple, eerie title sequence – yes, you can still have a title sequence! – of waves crashing on rocks, splashing up and dripping off of invisible letters. The opening takes place high above those rocks in the mansion of super-rich-tech-genius Adrian Griffin (Oliver Jackson-Cohen, FASTER, The Haunting of Hill House), who is asleep. His girlfriend Cecilia (Elisabeth Moss, SUBURBAN COMMANDO) is trying to sneak out, something she has clearly planned for and is very scared about, with a go-bag in a hidden compartment, a plan for turning off the security system and a rendezvous point with her confused sister Emily (Harriet Dyer). END_OF_DOCUMENT_TOKEN_TO_BE_REPLACED