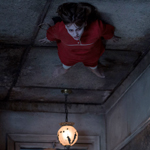 In case you get your 1-2 word title ghost franchises mixed up, THE CONJURING is the one by James Wan (DEATH SENTENCE, FURIOUS 7) that’s not INSIDIOUS. INSIDIOUS is the one that stars Patrick Wilson and Rose Byrne, THE CONJURING is the one that stars Patrick Wilson and Vera Farmiga. They play the famous “real life demonologists” Ed and Lorraine Warren, who were involved with investigating most of the alleged ghost cases that have been made into movies other than CASPER, which they were not able to investigate due to a scheduling conflict. This chapter opens with them on the case that became THE AMITYVILLE HORROR, but is mostly about the one that became GHOSTWATCH. END_OF_DOCUMENT_TOKEN_TO_BE_REPLACED