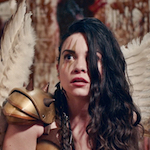 It’s now made almost $8 million, which is tiny compared to any blockbuster, but it’s about five times what last year’s best picture winner CODA made. So unless I misunderstand how this works, writer/director Damien Leone better make room for five best picture Oscars on the shelf next to part 1’s trophies for ShockerFest Audience Choice Award and Louisville Fright Night Film Fest “Best ‘Grindhouse’ Film.” And I try to watch all the most classy and acclaimed motion pictures so I set aside my belief that evil clowns are corny to watch TERRIFIER, and I liked it enough to go see TERRIFIER 2 when it came back to Seattle last Friday. END_OF_DOCUMENT_TOKEN_TO_BE_REPLACED