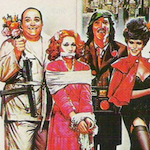 THE EVIL DEAD was a hit. It took them a while, but they found a distributor, Irvin Shapiro. He’d been a founder of the Cannes Film Festival, and arranged for it to screen out of competition, where Stephen King saw it and loved it. Him raving about it in USA Today brought it outsized attention for such a small movie. It was well reviewed and became a sleeper hit, making 8 times its budget at the domestic box office (and then we all saw it on video).

And you know how these days you can make a low budget horror debut and a studio will hire you to direct SHAZAM! or some shit? That’s a little bit like what Raimi tried to do after THE EVIL DEAD. Not a for-hire thing, but a bigger movie more in the comedic vein of his amateur Super-8 films. According to Bruce Campbell’s book If Chins Could Kill: Confessions of a B Movie Actor, THE EVIL DEAD editor Edna Ruth Paul had told Raimi that her assistant Joel Coen and his brother Ethan wrote great scripts. “Ethan was just a statistical accountant at Macy’s at the time,” Raimi is quoted as saying in the book, “and I thought it’s probably going to be awful, but I’ll read it because I like Joel. And I read it and I thought, ‘This is really a great script. These guys know how to write scripts.’ I needed help, because ours was no good and they came in and helped me with it.”

Later there was an uncredited pass by Sheldon Lettich, who in a few years would become forever associated with Jean-Claude Van Damme by writing BLOODSPORT and then directing LIONHEART. (Lettich would also co-write a too-ambitious EVIL DEAD 2 draft similar to what became ARMY OF DARKNESS.)

Set in Raimi and Campbell’s home town of Detroit, CRIMEWAVE (1985) is a weird and funny movie, teeming with 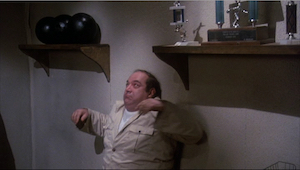 Raimi and Coen personality, from the precisely worded dialogue full of humorously archaic phrasing, to the over-the-top set pieces, to the straight up Three Stooges cartooniness. A favorite example of the latter: during a struggle, a shelf gets knocked down and a series of bowling balls (or cannonballs?) roll onto a villain’s head one after the other – don’t keep those on a shelf, people! That’s dangerous!

But Embassy Pictures fucked with Raimi from the beginning, causing numerous obvious compromises, so he and the Coens have long since disowned it.

First and worst compromise: they wouldn’t let Bruce Campbell be the star. He’s funny as Renaldo, the “heel” and lady’s man who’s the hero’s romantic rival. But the lead was given to Reed Birney (House of Cards, THE HUNT), who comes off like a poor man’s Anthony Edwards circa REVENGE-OF-THE-NERDS. He plays hapless dork Vic Ajax, who openly reads the book How To Talk To Women and then, when he gets the chance to, only talks to them about himself. It’s easy to imagine this cluelessness working with Campbell’s arrogant buffoon shtick, but Birney’s portrayal seems a little too accurate to that type of person to be charming. I kind of want to see him suffer. But he pulls some of it off. END_OF_DOCUMENT_TOKEN_TO_BE_REPLACED