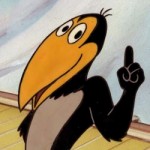 So I haven’t been in touch with you boys in a while but here’s what’s up. I got hold of a copy of THE CROW: SALVATION which is part 3 for the Crow series. Miramax made this picture and dumped it off in one theater in Spokane, Washington or somewheres. Nobody and their mother saw it so they said, forget it, straight to video for this one. There was some Crow fans on the internet trying to start a petition or something but, fortunately, they failed. END_OF_DOCUMENT_TOKEN_TO_BE_REPLACED