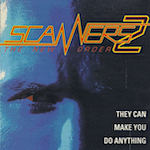 Of the sequels we’ve looked at so far I suppose the sequelization approach of SCANNERS II is closest to HOWLING VI: THE FREAKS – a story about a new set of characters set in the same world, where people are secretly telepathic rather than lycanthropic. But it’s different in that two of the characters are eventually revealed to be the children of part I’s protagonist. (Unlike MANNEQUIN: ON THE MOVE we have no returning actors.) END_OF_DOCUMENT_TOKEN_TO_BE_REPLACED