And so it was that in the late ’90s and early 2000s Jet Li left Hong Kong to make some Hollywood-produced, English language movies. Of course if you have a guy who’s a legendary martial arts champion and iconic star of many of his generation’s most popular movies (the SHAOLIN TEMPLE series, the ONCE UPON A TIME IN CHINA series, the FONG SAI YUK series, and FIST OF LEGEND) what you do in the U.S. is put him in a movie with DMX and Anthony Anderson that’s billed as “an urban Romeo and Juliet.” I mean, what else would you do with him? That’s just obvious.
END_OF_DOCUMENT_TOKEN_TO_BE_REPLACED

It’s 3 years later and the government has made good on its promise for regime change, but nothing else. The district is still walled in, and the cops still treat everybody like shit. Leito (Belle) doesn’t want to let it go so he has a hobby of strolling around casually attaching bombs to walls and blowing shit up. Then he gets chased by cops and the gangs, or “clans,” get pissed at him because they sort of like their lives behind the walls and don’t want him fucking it up. END_OF_DOCUMENT_TOKEN_TO_BE_REPLACED 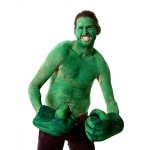 But I got a little worried when I read that Edward Norton had rewritten the script. Uh oh. That means he thinks he’s making the serious Hulk movie. Did he not know about the Ang Lee one? I think he did, because I read that he turned it down. I guess he regretted that maybe. It’s true, Louis Letterier is not in TRANSPORTER 2 mode here. He’s more in DANNY THE DOG aka UNLEASHED mode: a movie with elements of crazy action fun, but that is trying really hard to be a serious drama. END_OF_DOCUMENT_TOKEN_TO_BE_REPLACED

The new cut is not drastically, hugely or monumentally different. If you hated the theatrical version you’ll still hate this one. The story is the same, I didn’t notice any scenes removed or added, there’s no new narration or a corny shot of a unicorn that’s supposed to make you see the whole movie in a new light. McClane still doesn’t make good on his threat to beat Kevin Smith’s character to death – not even in a deleted scene, unless it’s one a them “easter eggs” and I just didn’t find it. I’ll keep looking. END_OF_DOCUMENT_TOKEN_TO_BE_REPLACED

Holy Cow! It’s Vern’s Review Of LIFE FREE OR DIE HARD! Did He Like It Or Not?!?!

I haven’t seen this one yet. Almost went to a midnight show tonight, but it just didn’t time out right. But honestly, you guys don’t care what I have to say about this. You probably don’t care what Quint or Harry have to say, either. Or Capone. Or Massawyrm. Or anyone here at the site except for one man… the guy whose original rant about the PG-13 rating ended up summoning Bruce “Walter B” Willis out of the ether in one of the craziest talkback moments of all time.

Yes, that’s right. It’s time for Vern’s review of LIVE FREE OR DIE HARD. Which means it’s time for me to piss off and hand over the stage to him:

“No one has that power. There is a much more powerful guy in Hollywood, and his name is Rupert Murdoch. It’s his corporation. I only work there.” –Bruce Willis to Vanity Fair, on not being able to do an R-rated DIE HARD

“This city is like a big CHICKEN, waiting to get PLUCKED.” –SCARFACE, edited for TV version

DIE HARD, the motion picture, characters and their likenesses, are the copyrighted intellectual property of the Twentieth Century Fox Corporation. To them DIE HARD is a franchise, a license, a property, a brand, a tentpole, a consumer product, an opportunity for cross promotion with Arby’s and whichever candy bar it was. To them DIE HARD is a dollar amount for an opening weekend, a domestic gross balanced against a marketing budget. But to the rest of the world, to the people with beating hearts, DIE HARD is something more. END_OF_DOCUMENT_TOKEN_TO_BE_REPLACED 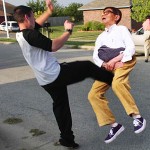 Now it’s years later and the movie has long since played American theaters and DVD players in a dubbed version called DISTRICT B13. The advertising campaign has tried to convince us we know what the word “parkour” means. Another practicioner of the art has battled (and lost) the new, badass James Bond. Now it’s old news, the excitement has worn off, so I saw it now. That’s just how I roll. END_OF_DOCUMENT_TOKEN_TO_BE_REPLACED