It’s 3 years later and the government has made good on its promise for regime change, but nothing else. The district is still walled in, and the cops still treat everybody like shit. Leito (Belle) doesn’t want to let it go so he has a hobby of strolling around casually attaching bombs to walls and blowing shit up. Then he gets chased by cops and the gangs, or “clans,” get pissed at him because they sort of like their lives behind the walls and don’t want him fucking it up. 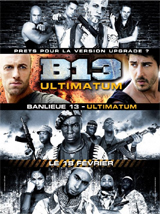 But some scary dudes who we later find out are from “Harriburton” have a plan to cause havoc in B13 so they can convince the president to bomb it and then they can rebuild, like they did in Iraq. A kid hands Leito a tape that exposes the plot, and meanwhile Captain Damien Tomaso (Rafaelli) is getting set up by other cops so he won’t get in the way of their conspiracy. Nice try, assholes.

One great moment is when Leito gets a voicemail from Tomaso. He’s already in a predicament – he’s just discovered what the tape is that got handed to him, and enemies are right outside his door about to storm in and try to kill him. Now all the sudden this cop who helped him 3 years ago says he’s locked up in the police station and knows he can count on him to help. It’s a nice honor moment – yes, I will bust you out of jail, if you ask me to in a voicemail. So sure enough he goes and gets himself arrested, and the chase is on.

These guys are great because just based on looks I’m not sure they’d cut it. Rafaelli’s a funny looking skinny bald guy, Belle has his spiky hair and babyface peering out behind the overcompensating tattoos. But they act like brooding badasses and you can’t laugh because more than with most people in movies you know it’s fucking real. Rafaelli is stunt coordinator for most Besson movies, Belle is the co-founder of parkour. For them the acting is the stunt work.

For some reason Leito’s sister doesn’t return (except when it replays the end of the first one at the beginning). K2 isn’t back because the actor who played him died. (That’s for the guy on IMDb who was disappointed that K2 wasn’t back.)

It’s not as fresh as in the first one, but there’s a comparable amount of parkour chases and well-choreographed fights. Lots of jumping off roofs, stepping off walls, leaping down stairs, sliding down slopes, hopping through windows. The graceful way Rafaelli jumps feet first through a car window makes the Duke boys look like — well, even more like a couple of crude rednecks. There’s a real good fight with a new character, a female clan leader with alot of attitude in her moves and a blade on the end of her long hair braid.

But I have to say, it’s a little disappointing how close they followed the template of the first one. Once again Tomaso is introduced deep in a criminal lair having to fight his way out (though this time in drag, and using a Picasso Van Gogh as a weapon and shield – one of the best bits). Once again there’s an intentional jail-entry and escape. The president is nice this time but naive, surrounded by the same type of corrupt assholes who look down on the poor.

It’s a good recipe and I enjoyed it for what it was, but I think they should’ve tried to take it up a notch. One thing you gotta respect about Tony Jaa and his guys – they don’t just pump ’em out, because they’re always trying to top themselves. In ONG BAK they put Thailand on the action movie map. In TOM YUM GOONG/THE PROTECTOR they upped the ante on elephant stunts and and that unforgettable one-take battle up the stairs. For ONG BAK 2 they went even further with the elephants and Jaa learned several new fighting styles and weapons skills. Each movie pushing ahead, trying to blow you away with something you haven’t seen before. With DB13-U I wish I’d seen some of that initiative, trying to make the greatest parkour chase on film so far. Instead they were content with more of the same.

SPECIAL PEOPLE WHO HAVE ALREADY SEEN IT SPOILER SECTION

Man, that’s a pretty crazy ending though, huh? I can’t believe they went for that. It’s kind of like if at the end of RETURN OF THE LIVING DEAD they stopped the government from nuking the town, then got appointed to the city council, then voted to go ahead and nuke it after all. Weird. And I don’t know how they’re gonna do a part 3, because what are they gonna have to parkour on?

Cyril Raffaelli David Belle parkour
This entry was posted on Wednesday, February 3rd, 2010 at 3:38 am and is filed under Action, Reviews. You can follow any responses to this entry through the RSS 2.0 feed. You can leave a response, or trackback from your own site.