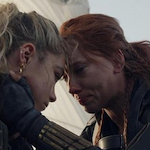 The good news for people who like Marvel but get overwhelmed keeping track of all the shit is that this one is low on continuity and tie-ins. It references the basic Black Widow backstory and I don’t remember what that’s all about, but I didn’t feel like I missed anything important. It takes place however many movies ago when she’s been set up and is on the run, so that eliminates most “what does this mean for the larger Marvel universe?” concerns. (It also makes me realize how much more attached I am to Star Wars than the MCU: Star Wars makes me say, “Ah, this must be not long after Order 66, interesting,” and the MCU makes me say, “It’s after CAPTAIN AMERICA: CIVIL WAR – who gives a shit?” I treat Marvel more like the serials Star Wars was emulating – on to the next chapter, no time to look back. But I’m sure there’s a whole generation who feel differently.) END_OF_DOCUMENT_TOKEN_TO_BE_REPLACED