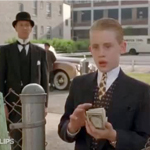 I looked up some of the other family movies of ’94, and they include THREE NINJAS KICK BACK, LITTLE BIG LEAGUE, ANGELS IN THE OUTFIELD, THE SANTA CLAUSE and THE PAGEMASTER. I haven’t seen any of those and I don’t know how they open, but you can imagine throwing stars, baseballs, footballs, Christmas presents or books dancing around some of those titles when they appear on screen. For RICHIE RICH, the magic of sports or holiday fantasy or reading is replaced by, you know, extreme wealth. So a fantastical Alan Silvestri (BACK TO THE FUTURE, WHO FRAMED ROGER RABBIT, SUPER MARIO BROS., AVENGERS: ENDGAME) score plays as a vault opens to reveal the shimmering title. END_OF_DOCUMENT_TOKEN_TO_BE_REPLACED