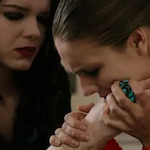 I know I should’ve watched it a long time ago. I guess I hestiated because the title sounds like a comedy, and it sounds like it’s about a thing that’s not all that interesting long before you get to my age. And he’s only co-director and I thought it was some previous unfinished thing because I remembered that title being on his IMDb profile a million years ago. END_OF_DOCUMENT_TOKEN_TO_BE_REPLACED 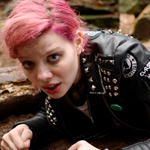 The story centers on Chelsea (Chloe Levine, The Defenders), whose family owns the cabin. She was there as a little girl when her uncle (Larry Fessenden, the Stan Lee of indie horror) died under grisly and not-yet-fully-explained-to-us circumstances. Now she gets pushed into bringing her friends there to hide out after her shithead boyfriend Garth (Granit Lahu) stabs a cop during a police raid at a punk show. END_OF_DOCUMENT_TOKEN_TO_BE_REPLACED