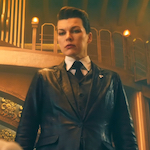 Written and directed by Alan Yuen (PRINCESS D, FIRESTORM) with action direction by Stephen Tung Wei (HERO, BODYGUARDS AND ASSASSINS, KUNG FU KILLER), the original title is 素人特工 (AMATEUR AGENT), but the English V.O.D. title is THE ROOKIES, and last Tuesday Shout! Studios released it on DVD and Blu-Ray as DEADLY FORCE: MISSION BUDAPEST. (Yes, that sounds like a joke title I would use for a fake generic action movie, but that’s real.) Jovovich plays a cool supporting role to a younger Taiwanese and Chinese cast in this comedic spy thriller. END_OF_DOCUMENT_TOKEN_TO_BE_REPLACED 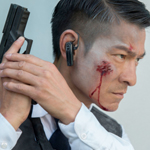 This is not the Hong Kong I know from other movies, with all the bustle and boats and steam coming off of outdoor markets. This is clean, professional downtown Hong Kong. Tall buildings, office clothes. That robbery happens in broad daylight, the gunmen wearing scary fencing type masks. It’s got a realistic feel but it’s this outlandish action spectacle, like HEAT meets more of a DIE HARD WITH A VENGEANCE world. END_OF_DOCUMENT_TOKEN_TO_BE_REPLACED