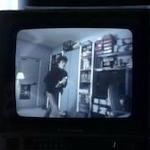 BENNY’S VIDEO (1992) is a disturbing psychological drama about a teenager whose fascination with violent videos blooms into actual sadistic violence. And you know how it always seems like parents have no idea what their little brats are up to? Well, when this kid’s parents find out about it they don’t have what most would consider a healthy or ethical response. The movie is very dry and unnerving, well made, and easy to read as a judgmental statement by someone who’s completely full of hot air – all trademarks of writer/director Michael Haneke’s early work. I don’t mean to diminish his filmography as a whole, which mostly does not deal with this theme of violent media’s connection to real violence. But this is his sophomore film, coming three years after his acclaimed debut THE SEVENTH CONTINENT and five years before the similarly themed FUNNY GAMES.

It opens with real video footage of a pig being killed with a bolt gun. After it dies, the video rewinds and replays in slow motion. As with FUNNY GAMES, I got the feeling Haneke was saying, “Isn’t it disgusting that you sick fucks watch this shit that I put into a film and advertised and encouraged you to watch?” But in the case of FUNNY GAMES, I gotta concede that I would indeed watch violent movies like that on my own accord. I would not have purposely sat down to watch a video of a pig dying. So you definitely don’t have the high ground on this one, professor. 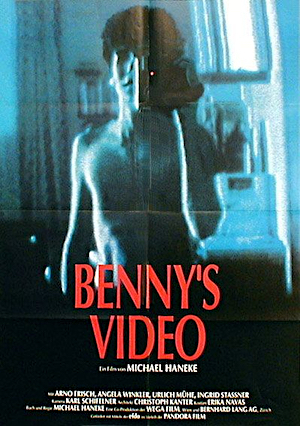 The titular Benny (Arno Frisch, FALCO – VERDAMMT, WIR LEBEN NOCH!) is an upper class teenager in Vienna whose parents aren’t around much, and when they are their relationship mostly involves sitting silently at the dinner table. Benny spends most of his time alone in his room watching videos or his camera feed of the street outside his building. The world around him is in turmoil – we hear parts of news broadcasts about Serbian military atrocities and local right wing football hooligans attacking asylum seekers. He’s definitely kind of distant, but I think there’s a little bit of an Antoine Doinel feel to him. He seems like a smart kid with some unique skills, including knowledge of electronics. Being alienated from his parents has allowed him to develop his own life and find his own interests.

Unfortunately one of those interests is death. He obsessively watches that pig video from the opening (which it turns out he filmed himself) as well as various violent action movies that he rents from a small local video store. This is not a thing I ever saw in the U.S., but they have a row of monitors with head phones to sample the videos before bringing them home and watching them more. 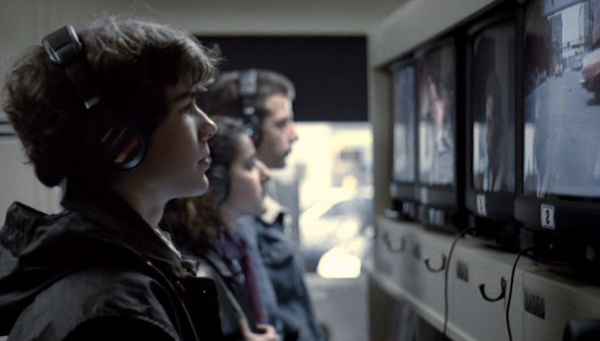 He just stares blankly, emotionally unaffected, just wanting to vicariously soak in and savor fantasies of brutality and sadism. Above he’s seen watching some dark, cruddy looking movie, some disgusting filth from the ’80s about a car driving around recklessly in an ugly city. A gross, monstrous looking man savagely attacks two men inside their car, causing it to swerve all over the place and—

Hold on. Wait a minute. 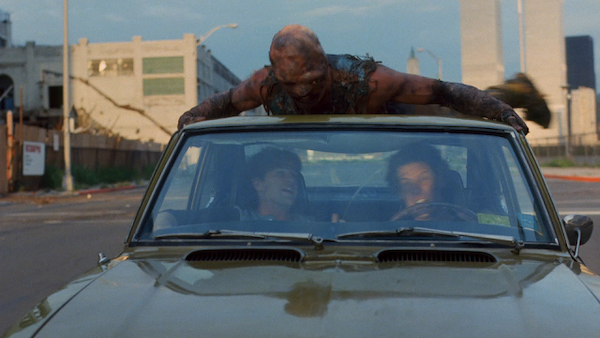 IS BENNY WATCHING THE FUCKING TOXIC AVENGER!? Yes, I’m afraid he is. There’s another video we’ll get to which I believe has to be the titular “Benny’s Video,” and if it wasn’t that one it would obviously be the pig video. Still, it could be said that one of Benny’s Videos is THE TOXIC AVENGER!

What the inclusion of this particular scene in this particular movie meant to Haneke is anyone’s guess. Mine is probly less charitable than some. I suspect that Haneke didn’t understand that THE TOXIC AVENGER was an intentionally over-the-top, silly comedy. It’s also possible that he did understand that and that’s what he thought was so fucked up about it. But I doubt that, since he edited it to seem like it came from a serious movie.

The bigger question is whether he understood what was going on in the scene and used it as irony, or whether he just didn’t know. In the context of BENNY’S VIDEO it seems like a maniac forcing people to crash their car for thrills. But in the actual movie The Toxic Avenger is shaming Bozo and Slug for getting off on murder. “How does it feel to hit a kid on a bike? Feels good, doesn’t it?” he says. So it’s interesting that Haneke chose that scene for this movie about a kid who wants to know what it feels like to kill someone (but will not be toxically avenged for it). 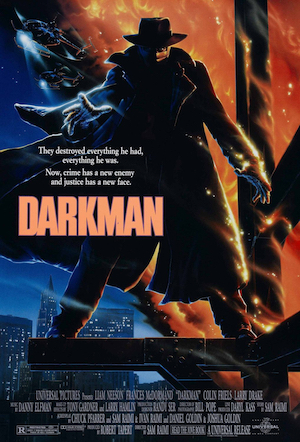 Benny has DARKMAN and ANOTHER 48 HRS. posters on the wall in his bedroom, and a tape of CYBORG. In the video store, advertisements for TANGO & CASH and STEPHEN KING’S GRAVEYARD SHIFT (“No. 1 Hit U.S.A.”) are prominent. It’s possible that Haneke avoided self-consciously fucked up exploitation like CANNIBAL HOLOCAUST or FACES OF DEATH in favor of these random, innocuous titles because he wanted to indict all Hollywood and Hollywood-ish product, not just the outliers. It’s also possible he did it because he’s totally out of touch and has no idea what the specific movies are that fit the sort of thing he’s trying to attack. I could go either way.

Anyway, my fellow DARKMAN fan Benny invites a girl (Ingrid Stassner – thank you CrustaceanLove for telling me the credit “Mädchen” means “Girl” and is not her name) who he’s seen outside of the video store, over to his place. She seems very unenthusiastic, but a little curious about his whole deal. She doesn’t like the same kind of movies as him, just “ROGER RABBIT. That sort of thing.” She definitely should leave when he does his “joke” about pinning her to the ground to imitate “a cop on the underground,” and again when he makes her the nastiest, drippiest looking faux-pizza ever put on film. I don’t know if this is a regional thing or not but it is the most vivid insight into the desolate wasteland of Benny’s soul.

He says violent movies don’t bother him because “it’s all ketchup and plastic,” but he also makes her watch his video of the real pig really dying. She wonders what it was like to watch it happen. He reveals that he took the bolt gun that’s in the video. He holds it to his chest and dares her to press it, but she doesn’t. Then he holds it to her chest and does press it, and it’s not a trick – she drops to the ground and tries to crawl away. He’s videotaping the whole thing. In a very hard to watch scene, we see him on the monitor running and reloading and he keeps shooting her until the cries stop.

Then he just stuffs her in the closet and goes on with his life. He goes to choir practice (how do we know if that’s an ironic juxtaposition or an attack on the influence of choral music in young men’s lives?), goes to a small heavy metal show, sleeps over in bunk beds with his friend. They talk about tickets to an upcoming AC/DC concert, which I very much wish was Haneke’s idea of a scary heavy metal band, but the guy had John Zorn on the FUNNY GAMES soundtrack so surely he knows better. My own cultural ignorance made this part more amusing because when they smoke cigarettes in bed I can’t tell if it’s supposed to be an example of shocking teenage behavior (like the kids dropping acid and playing Mortal Kombat in BULLY) or if smoking in bed was normal in that place and time. I have no idea.

He keeps making videos, including a gross one that he/Haneke rewinds and makes us rewatch of him naked talking on the phone, with a close up of his bellybutton panning down to his pubes. He also goes to a barber and has his head shaved (a real hair cut that we see a surprising percentage of in real time), which really angers his father (Ulrich Mühe, THE LIVES OF OTHERS). I believe it’s a skinhead thing, making dad worry his son is turning into one of those immigrant hating football assholes, but he frames it in more of a “what will people think?” type way than an “I’m worried about you.”

As far as cries for help, though, Benny can do better than a hooligan hair cut. He interrupts their news broadcast by playing them the video of that murder he did.

This is actually where the movie gets a little more interesting. The whole thing is pretty effective, but “Can you believe what the teens are up to?” paranoia is old hat and easy to laugh off. I found it a much more shocking twist when Benny’s father gave Benny’s crying mother (Angela Winkler, THE LOST HONOUR OF KATHARINA BLUM, THE TIN DRUM, SUSPIRIA 2018) a nonchalant monologue about how they might be charged with neglect if they turned in Benny and it would ruin their lives so maybe instead they should help him cover it up.

So the last act of the movie is about mother and son taking a vacation to Egypt together while dad, off screen, chops the body into small enough pieces to flush down the toilet! Benny takes a bunch of video at the beach and tourist destinations and also records Mom on the toilet. But other than that last one they start seeming more like a loving mother and son… until mom occasionally remembers what’s going on, breaks down crying, and Benny doesn’t understand what the big deal is. Still, it makes you wonder how different things might have turned out if they’d spent quality time together like this from the beginning.

ANSWER: Not much different! THE TOXIC AVENGER still would’ve ruined him!

Okay, the truth is I’m not sure Haneke blames THE TOXIC AVENGER, TANGO & CASH and DARKMAN for society’s problems. The war criminals and racist thugs on the news in the background haven’t necessarily seen Toxie. Benny’s father has the living room absolutely crammed full of framed art prints and stuff, and he didn’t turn out so hot either. The heart of the matter seems to be that Benny wanted to kill to see what it felt like, and then wasn’t sure what it felt like. When he confesses to the police and they ask why he decided to come to them now, he says “Because.” When it comes down to it, BENNY’S VIDEO may be more of a nihilistic shrug than a moral scolding. Which is not a huge improvement, but maybe an improvement? This isn’t a bad movie. It’s as creepy and upsetting as it intends to be. I liked THE TOXIC AVENGER better though.

p.s. I wrote in my notes “D.C. Follies!?” I can’t remember in which scene this short-lived show starring Fred Willard and foam puppet caricatures of various politicians and celebrities was playing on a TV, but it made me laugh to see it.

Angela Winkler Arno Frisch Austria Michael Haneke Ulrich Muhe Vienna violence in media
This entry was posted on Thursday, February 24th, 2022 at 1:38 pm and is filed under Drama, Reviews, Thriller. You can follow any responses to this entry through the RSS 2.0 feed. You can skip to the end and leave a response. Pinging is currently not allowed.