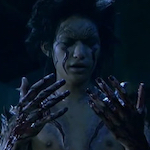 DEVILMAN (2004) is a live action fantasy-horror-action film based on the manga and anime of the same title created by Go Nagai – that guy who had the cameo as a food critic in THE TOXIC AVENGER PART II. Like THE TOXIC AVENGER PART II, DEVILMAN begins with friendly narration by its hero, in this case Akira Fudo (Hisato Izaki, CROWS ZERO), calmly telling us about his life and adventures.

The story is about a lifelong friendship between clutzy Akira and his more athletic friend Ryo Asuka (Yusuke Izaki, also CROWS ZERO). We see in the opening flashback that as a little kid Ryo “was a bit strange,” meaning he had grey hair, was obsessed with monsters and said he was one of them. Now Akira is known for his awkward smile and Ryo is known for his creepy lack of ever smiling at all. When some jerks at school beat up Akira a guy with long brightly colored braids (Masaki Nishina) warns them that one time he bullied Akira and Ryo came into his class and cut off two of his fingers with hedge clippers. 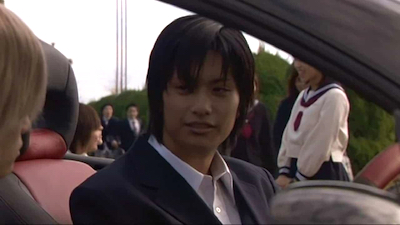 That’s pretty intense, but for the most part the first ten minutes just seem like a corny teen soap opera. I didn’t have to look these guys up to guess they were J-Pop stars. (I did have to look them up to know they were identical twins – I feel stupid about that. I guess the hair color and expressions threw me off.) Here they are with their dreamy bangs, their school uniforms and their awkward crushes – Akira’s is on his bubbly adopted sister Miki [Ayana Sakai, BATTLE ROYALE II].)

The turning point is when Ryo says his dad died while picking up Akira at school. Akira asks how so naturally Ryo reaches into his car and pulls out an enormous set of virtual reality goggles containing a video of his scientist dad (Hirotaro Honda, GAMERA: GUARDIAN OF THE UNIVERSE, DEAD OR ALIVE, KAMIKAZE GIRLS) explaining how he drilled for an alternative energy source in the arctic but it turned out to be a race of demons (that looks like sperm?) that fused with him and the other workers. And Ryo brings Akira to his mansion where we see that his dad is not actually dead quite yet – he’s just turned into a giant head and arm (?) living miserably inside a room covered in his guts I guess? I don’t really know what to make of it. But it does not seem like a state he would prefer to be in. 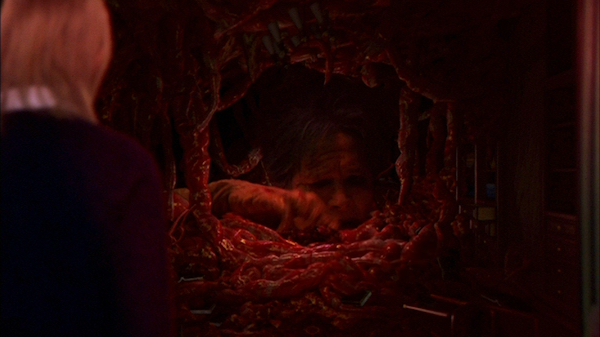 Ryo also reveals that he himself is possessed so he wants Akira to stab him to death. But you know how these things go – Akira refuses and then a glowing sperm flies into his stomach and he becomes merged with a legendary demon called Amon and transforms into a spiky, sharp-toothed beast but because he still has a human heart he is “a Devilman” and stays in control (like Spawn). Meanwhile, Ryo turns into a glowy white angel. The irony is that we later find out he’s Lucifer, while evil looking Akira is a good guy. 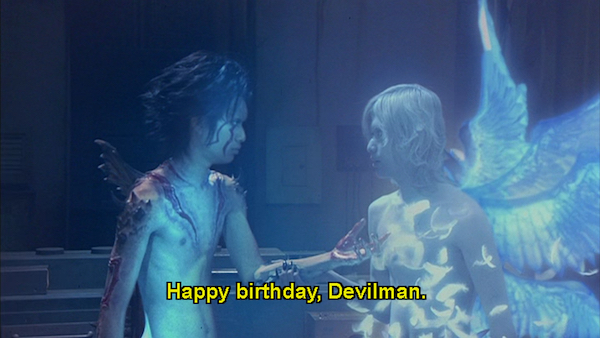 While not in Devilman form Akira has enhanced abilities, so there’s some wire fu. But often the action is all animated. I’m sure many would dismiss the FX in this movie as cheesy, but I find them pretty appealing. Akira has a half-transformed stage that’s all makeup, but then he turns into this CG version of the cartoon character. Sometimes his battles with other such creatures look like they come from an animated movie, but they mix and match between live action style (film grain, speed ramping, P.O.V. shots) and anime (motion lines). 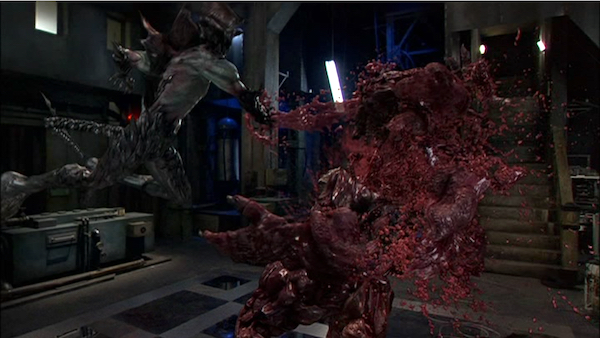 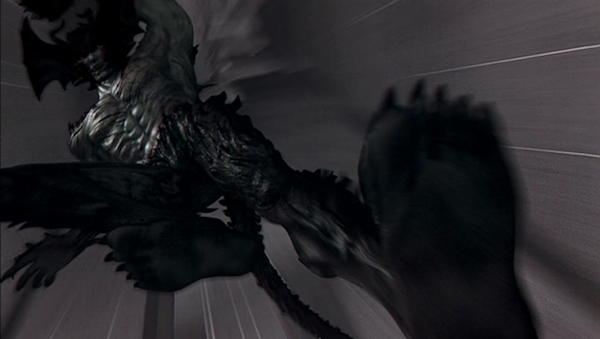 There are even little flashes to line drawings to honor the character’s history in comics and animation, but I think they already do that by not going quite photo-realistic on the computer animation. 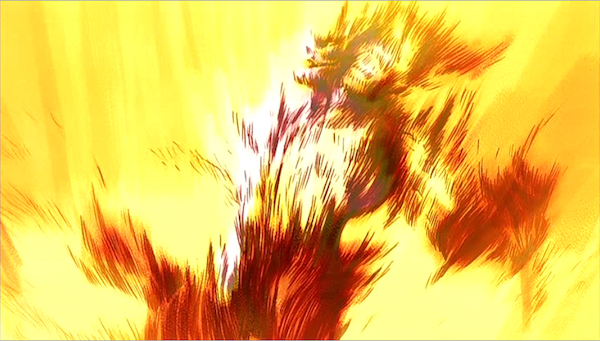 We learn that demons can fuse with animals. Then this human looking one called Jinmen (Masakatsu Funaki, SHADOW FURY, GODZILLA: FINAL WARS) eats a baby turtle and turns into a turtle monster. Devilman finds him in the woods with the faces of the people he’s eaten (including that guy with the braids) popping out of his shell like souls in a Freddy Krueger pizza. But as Devilman kills him Jinmen explains that he just eats people like people eat animals, and Devilman starts to realize that not all demons are evil. They’re just not vegetarians. 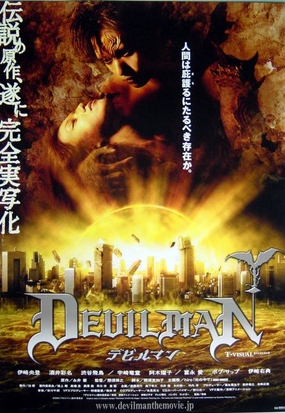 Meanwhile, the public are starting to become aware of all these demon people, and the authorities are trying to exterminate them. Miki learns that her friend Miiko (Asuka Shibuya) is one of them (she has weird silver swirly things growing out of her arms), and she and her family help hide her. Good people.

Things get dystopian. People who don’t fit in are falsely accused of being demons beat up. Government goons in white biohazard suits like in THE CRAZIES go around trying to kill all the demons and announcing every time they destroy a “demon nest.” These agents are jerks, but when Ryo machine guns 89 of them in one incident Akira starts to be suspicious of him. I guess that’s not his style, so when some treacherous sonofabitch neighbor reports Miki’s family he doesn’t turn into Devilman and bite their fuckin heads off, he just confesses to being Devilman and turns himself in. The goons drive him away strapped to a cross and fill him full of lead (don’t worry, he’ll be back) and they leave the family alone, but it doesn’t make much of a difference since now all the asshole neighbors think Miki is a demon and a huge mob attacks the house.

Suddenly meek, bullied in school Miiko sprouts wings and has a sword and knows how to use a machine gun, so that’s pretty cool. 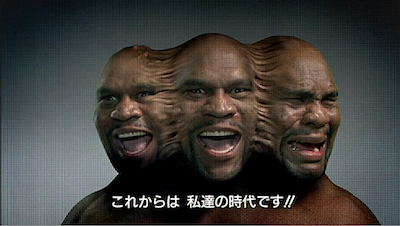 One sci-fi type element is that there’s a big TV screen in the middle of town where we see world news reports in English. The anchor is played by former football/pro-wrestling/kickboxing/MMA athlete Bob Sapp (BLOOD AND BONE, CONAN THE BARBARIAN). Eventually he tears his shirt off and transforms into a three-headed demon live on air. One of those infamous television moments the people who happened to be tuned in or standing near the giant outdoor screen will never forget.

Things turn surprisingly fucked up when (SURPRISINGLY FUCKED UP SPOILER) Akira discovers poor Miki’s severed head left for him at the house. He carries it like a baby through the wreckage of a blown up neighborhood. Shit is bad. He brings her head to the church where she once said they could get married and sets it on a table like Jason Voorhees’ shrine to his mother. I didn’t know it was gonna be this kind of movie. By the end Devilman and Lucifer are dying on a rock together, the sky is red, the moon is cracked in half, Miiko and a little boy think they might be the last living beings on earth, and a pop ballad plays over the credits and a yellow-tinted shot of the camera pulling back to show civilization in ruins. It’s pretty funny that this started as a story about high school bullying and got here. I guess these sorts of things escalate. 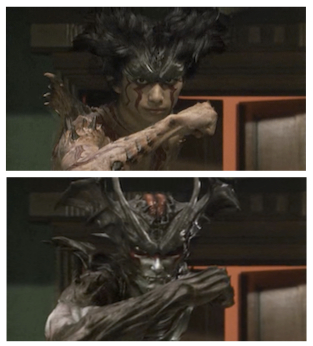 I don’t think there was any rhyme or reason to Go Nagai appearing in THE TOXIC AVENGER PART II, but there’s a coincidental comparison between Devilman and Toxie. Both are young dorks who had accidents that turned them into monsters and took it upon themselves to battle evil. Both are good guys who are scary and violent. This movie is more serious though, and more chaste (no monster sex scenes), though things turn out way, way worse for every single person (or demon) involved.

Based on my research I get the sense that this is a pretty faithful adaptation of the manga, but if you were really into the character I imagine you’re probly open to anime and prefer that version to this pretty corny distillation of the story. And those who aren’t into that sort of thing might just think this thing is ridiculous and cheesy. I can’t claim the J-Pop twins are good in it or that it’s a good movie in most traditional senses, but I found its basic concept pretty cool and its shameless outlandishness consistently entertaining. It’s too bad the entire world was destroyed in this one because they could’ve done a reverse Toxie and had a part 2 where he goes to the U.S. and has different fish out of water hijinks while trying to find his long lost father.

Asuka Shibuya Ayana Sakai Bob Sapp Go Nagai Hirotaro Honda Hisato Izaki J-Pop manga Masakatsu Funaki Masaki Nishina Yusuke Izaki
This entry was posted on Tuesday, March 1st, 2022 at 7:13 am and is filed under Comic strips/Super heroes, Fantasy/Swords, Horror, Reviews. You can follow any responses to this entry through the RSS 2.0 feed. You can skip to the end and leave a response. Pinging is currently not allowed.