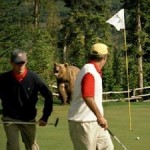 So most of the movie is spent in the house with the family sitting helplessly as their smug home invaders talk about games and bets and pretend that they’re being friendly. It is not graphically violent or shock value oriented like CHAOS or something. The cruelty to the characters and audience is mostly psychological. The most horrible stuff happens off camera. One scene focuses on one of the tormentors walking into the kitchen and calmly making a sandwich while the horror goes on in the other room. 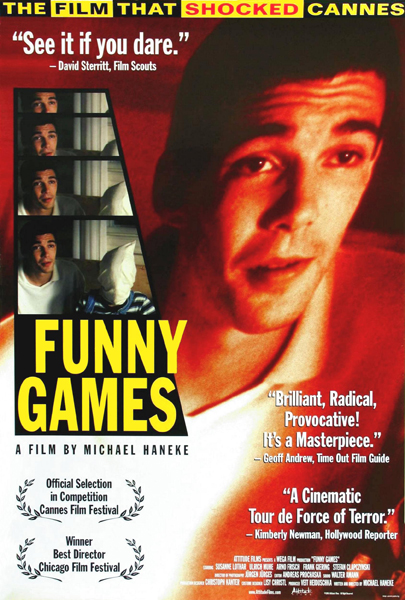 There’s no music except during the credits. Alot of the filmatism is show-off-edly minimalistic, like the shot that lasts about 10 minutes, mostly motionless, its first couple minutes looking like a still photo. I think the creepiness comes from this stark simplicity and from the Leopold-and-Loeb superior attitude of the villains. They have no motive, no backstory, and somehow that makes them seem more real. They’re just some pricks that like to do this. You hate them and you can feel that in this movie they have a good chance of winning.

The weirdest part of the movie, the part that shouldn’t work, is the way these pricks start to address the viewer. Me. You. During one sadistic “funny game” one of the guys turns and winks into the camera. But you’re not sure, the camera could be the POV of the other guy, maybe he’s not winking at us. Then later he turns to the camera again and is clearly talking to us when he asks what we think will happen, and if we’re siding with the family. It’s pretty uncomfortable, like when you’re at a bus stop and some dude with a ferret in his coat mumbles something to you and laughs, and you give him a courtesy laugh before you realize that he was nodding toward those black dudes over there and was probaly making some racial comment. Yeah, me and you, a couple of peers, white dudes, joking together. That’s kind of what it’s like, this guy is smiling at you and putting on the charm and you have no way of telling him no, dude, I’m not your pal. It’s not okay for you to joke around with me. Don’t involve me in this.

It’s pretty weird to have a serious, disturbing movie where a character “breaks the fourth wall.” You don’t get that too much outside of comedies. Don’t worry though, he doesn’t come out during the credits like Ferris Bueller and tell us to go home.

The movie’s ultimate self-reflective stunt – BIG ASS SPOILER ALERT – is right after the mom manages to grab the gun and blow away one of the dudes. The other guy freaks out and searches frantically for the TV remote. When he finds it he uses it to rewind himself, his reality, the movie itself. He backs it up so he can grab the gun before she does and his partner doesn’t get shot.

Okay, this is ludicrous, how can this work? The movie has gone too far. It’s magic now. It’s a joke. An Adam Sandler movie. That’s what I thought for a second. Then I realized that for some reason it actually worked. Haneke gave the audience a release, a hope, and then he rescinded it, retroactively removed it from the story. Okay, here’s what you’ve been hoping for, enjoy. Oh, wait. It seems there has been some sort of mistake. You don’t get to keep that release. Please give it back. We apologize for any inconvenience this may cause.

It works because it manipulates you, and it goes so far in manipulating you that it calls attention to itself. Hello, director Michael Haneke here with a friendly reminder that I have complete power over this story. I can have her blow the guy away, I can have her not blow him away. I choose the one that will be less satisfying to you. But please know that this is not an accident. This is my choice. And my decision is final. Fuck you and your mother. Love, Michael Haneke. P.S. eat a dick

I like the gimmick, but I believe I do have a disagreement with Haneke, and with many of the fans of this movie. If you listen to Haneke (including on the interview that was on the DVD I watched) and if you read what people write about the movie, it’s all about violence in the media, and it is indicting the audience for watching violence and all that type of horse shit. In that interview Haneke talks about the remote control scene, about how people at film festivals cheered when he got shot, and then when it rewound they went dead silent, because they realized they had just cheered a murder.

But I think maybe because he’s trying to be cynical he misunderstands how scare movies work, including his own. He has this carefully constructed tension and suspense here. He has designed it for us to root for the family to get away. He puts a weapon somewhere knowing we will wait for the family to find it and use it. He even has the bad guys looking directly at us and discussing with us that we are rooting for the family to survive.

And that’s exactly what we’re doing. I’m not saying there aren’t sadistic people out there, but that’s not the only thing film violence is about, or even the primary thing. The whole point of a movie like this is for the audience to not want to see violence. We root for the family to get away and honestly when she shot him I was not thrilled because ha ha, the bastard deserves it, I was thrilled because I thought she was gonna get away. So I think I speak on behalf of all those people clapping at the film festival when I say no, stupid, I was not clapping to prove your point about how dude, the media is sooooo violent I just noticed, but because you made a hell of an effective thriller. Dumbass.

He’s good at making this type of movie, so what’s wrong with somebody else being good at it too, and with people enjoying watching it? Does he know that the characters in these movies are fictional, and are no more hurt by a fictional bullet than they would be by the cancer they’d have if they were in a Susan Sarandon movie? Are his motives really so much more pure than anybody else making a thriller?

Also does he know that they did the same type of thing in JASON LIVES: FRIDAY THE 13TH PART VI where the guy sees that Jason’s grave has been dug up, looks directly into the camera at the audience and says “Some folks sure got a strange idea of entertainment”? Does that mean that FUNNY GAMES and JASON LIVES are both morally better than other violent movies?

Haneke may be against watching movies where violence happens, but I am for it, so I recommend his movie FUNNY GAMES. But be sure to watch some violent American action movie afterwards and mail him a creepy videotape of you watching it and tell him that you loved FUNNY GAMES so much that it encouraged you and all of your friends to watch more violent movies and you would like to thank him and could he do a cop movie next that would be awesome.

This entry was posted on Wednesday, November 28th, 2007 at 5:24 pm and is filed under Crime, Drama, Horror, Reviews, Thriller. You can follow any responses to this entry through the RSS 2.0 feed. You can skip to the end and leave a response. Pinging is currently not allowed.