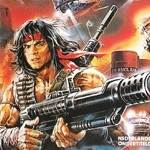 Thunder returns from unspecified adventures to his small Arizona desert town just in time to find Deputy Barry (Raimund Harmstorf, THE INGLORIOUS BASTARDS) sexually harassing his fiance Sheila (Valeria Ross, no other credits) at the gas station she owns and operates.

“Tell me, whaddayou like better?” asks the deputy. “Pumpin air or havin someone pump you?” I don’t think he’s a good cop. Luckily Thunder scares him off.

While talking to his grandfather (Slim Smith, also no other credits), Thunder hears explosions and learns that a company has started construction on the sacred land promised to them in the treaty they have framed on the wall. Thunder isn’t gonna put up with that shit, so he goes over and confronts the construction workers, starting a fight. 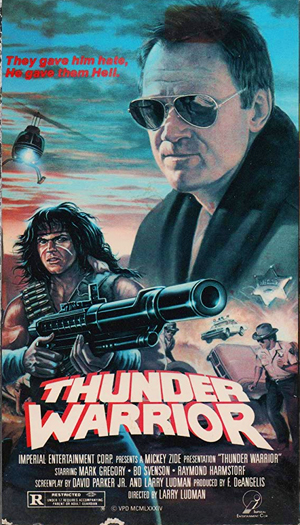 When that doesn’t solve anything he goes to the sheriff. Probly should’ve done that in the first place. Those guys are just employees of some company and now he’s started a war with them. In many ways this is a cheap ass movie, or at least it looks that way on the shitty VHS. The one thing they did to make it seem legit is to get motherfuckin Bo Svenson (following up BUTCHER BAKER NIGHTMARE MAKER and the Walking Tall TV series) to play Sheriff Bill Cook (that’s what they call him, though I thought his name tag said McCall).

Nothing against Joe Don Baker, but Bo Svenson is my Buford Pusser of record. He’s just a charming dude. My favorite thing in this movie is something I’m guessing he made up: the sheriff is introduced complaining about a toothache and making phone calls trying to arrange an emergency dental appointment over the weekend. When Thunder comes in to complain about this illegal construction going on he tells him, “You don’t want to mess with me boy, I’m not in the mood. I’ve got a tooth thing.”

The sheriff, sadly, is one of the nicest white people in the area (along with the good-cop partner to Barry’s bad-cop, who has lots of lines like “Isn’t it better to wait for the sheriff? He’s on his way up here.”) But he’s the type of guy who reinforces institutional racism without even realizing it. He assumes that Thunder couldn’t be right about owning the land because those are just the good old boys, never meanin no harm. He brushes him off with condescending lines like, “This is a friendly county and I’d like to keep it that way.”

So Thunder goes to the bank that’s funding the construction. Nobody will meet with him so he sits out front – what they used to call “Indian style,” now “criss-cross apple sauce” – holding the framed treaty in his lap. The sheriff sends Barry (who is now chewing gum – what an asshole) to pick him up and drop him off at the county line. Which is in the middle of a long bridge!

Unlike Rambo, Thunder doesn’t walk right back. He actually tries to leave. Unfortunately for everybody as he’s walking away the yahoo construction workers are in a Jeep drinking and driving aimlessly around the desert. When they see him they chase him, lasso him, and drag him. Then he heads back into town to report them, but Barry spots him outside the Glen Canyon Trading Post (later referred to as “Jim’s Trading Post,” so everybody must know the owner) and starts clubbing him like a baby seal.

Thunder fights back and I thought he was gonna punch one of them through the window into the store. Instead he knocks them over and himself jumps head first through the window. He steals a bow that he uses to pop a tire on a cop car and cause it to crash through 15-20 feet of fence. Then he steals a pickup truck and there’s a pretty respectable chase with various vehicles catching air, crashing and rolling, and your traditional cop-car-getting-the-top-sliced-off-driving-under-a-semi and all that. He gets away, but some friend of the sheriff flies around in a small plane and spots him.

A TV reporter named Brian Sherman (Paolo Malco, THE NEW YORK RIPPER) shows up in town trying to get a story. He tells Thunder’s grandpa to trust him because his mom was one quarter Cherokee (that sort of thing comes up often in these movies). It’s not until the scene where Sherman records Barry setting the Native cemetery on fire that he gets to take on the Colonel Trautman role.

“An American citizen, that’s who. And someone who just witnessed what you did. I’m KPHO, reporting.” But like Trautman he explains what kind of a badass they’re dealing with. “He knows every inch of these hills like the palm of his hand. But he’s a man fighting for a cause.”

One thing that’s different from Rambo: Thunder becomes sort of a folk hero. A local radio DJ glorifies him and even announces “the stupidity award” for Deputy Barry. So Barry sends his construction worker pal Tom (Antonio Sabato [Sr.], BARBARELLA, HIGH VOLTAGE), who has a bizarrely giant left eyebrow, to get Thunder with a stash of military grade weapons he keeps in a wooden box next to his house. He blows up Sheila’s gas station, which should be illegal in my opinion.

Things escalate, and let’s just say Thunder eventually puts on war paint and drives a bulldozer (with a pig in the shovel!) through the side of a building and starts firing off rockets from a stolen bazooka. When the cops get there, one goes in first and helps Thunder pretend to have burned to death, smiling and saying, “My grandpa is an Indian.” (See, I told you.)

Later, we see two little kids playing with toy guns and the blondest one squeaks “Thunder will never die!” in one of those adult-making-a-kid-voices like you’d hear in the dub of a GAMERA movie. So it’s a dual happy ending – Thunder gets to get away, but also become a legend.

Unsurprisingly for the period, lead actor Gregory does not share the ethnicity of his character. Born Marco Di Gregorio, he’s an Italian actor who, as a teenager, won the lead role of “Trash” in 1990: THE BRONX WARRIORS. His handful of other movies includes DELTA FORCE COMMANDO. After AFGHANISTAN: THE LAST WAR BUS in 1989, Gregorio stopped making movies and his whereabouts are unknown. In fact, Lance Manley, proprietor of a UK BRONX WARRIORS fan sight, has spent years and made multiple trips to Italy trying to track him down. He’s even met with BRONX WARRIORS director Enzo G. Castellari, who recorded a message for him to give to Gregorio if he finds him. Results have been inconclusive.

THUNDER writer/director “Larry Ludman” is also Italian, real name Fabrizio De Angelis. He was producer of the aforementioned BRONX WARRIORS along with well-known horror movies like ZOMBI 2, THE BEYOND and NEW YORK RIPPER. His career as a writer-director was mainly for these Rambo cash-ins – his first was OPERATION NAM (1986), which has an UNCOMMON VALOR/RAMBO FIRST BLOOD PART II type “vets return to ‘Nam to rescue POWs” story. His later films include KARATE WARRIOR (1987) and KILLER CROCODILE. That last one’s obviously inspired by ALLIGATOR, but it stars the son of Colonel Trautman himself, Richard Crenna.

The world of Italian exploitation brought us some of the most artful western and horror films ever, but also a whole lot of junk just like any other country’s film industry. This is much closer to the latter. But one advantage of its Italian heritage is a rousing score by Francesco De Masi (SARTANA’S HERE… TRADE YOUR PISTOL FOR A COFFIN, LONE WOLF McQUADE) that sometimes sounds like a full on spaghetti western anthem. An equivalent American action movie of the time would’ve had something less moving. Maybe even shitty keyboards.

And Thunder really needs some good theme music to pump us up, because to be frankly honest he’s not that cool. Of course I root for him – he’s right, and those guys are racist bullies and thugs, and it’s enjoyable how many lines he crosses in standing up for his position. Also, I guess it’s kind of cool that he’s a gawky, broody kid in an oversized coat, looking more like the bass player in a band that will only make a demo tape than the roided out He-Man on the posters, or the great warrior they say he is. But he’s not very charismatic. I like badasses to be economical with their words, but he comes across as pouty rather than stoic.

THUNDER is no classic, but it’s T.K.O.S.I.I.I. (the kind of shit I’m interested in), so yes, I’ll be reviewing the whole trilogy.

(note: after the traditional first-of-the-year Clint review, of course.)

Antonio Sabato Bo Svenson Fabrizio De Angelis Francesco De Masi Italian exploitation Mark Gregory Native American Paolo Malco Raimund Harmstorf
This entry was posted on Tuesday, December 31st, 2019 at 10:42 am and is filed under Action, Reviews. You can follow any responses to this entry through the RSS 2.0 feed. You can skip to the end and leave a response. Pinging is currently not allowed.