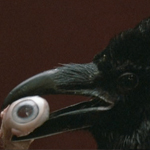 The ambition is clear in the opening scene, when obnoxious (and unseen to us) opera diva Mara Cecova throws a fit at Marco (Ian Charleson, CHARIOTS OF FIRE, GANDHI), visionary director of the Julie-Taymor/HIGHLANDER-II-ish stylized production of Verdi’s Macbeth she’s starring in, and storms out. The camera seems to represent her point-of-view, with everyone looking at her as she has her tirade, but if so then I guess she floats off the stage into the crowd and then walks out backwards? It’s confusing… and totally impressive and captivating.

The main character is Cecova’s understudy Betty (Cristina Marsillach, EVERY TIME WE SAY GOODBYE), who has to be convinced to take over because she believes she’s not ready and that Macbeth is bad luck. But she steps up, hits it out of the park, and becomes an instant celebrity. Only bad thing is a light fell during the performance and freaked everybody out. Oh, and afterwards they find out a guy got murdered in the balcony.

Yeah, there’s some masked individual trying to phantom this opera, and the body count adds up quick. He kills three of the production’s ravens and more of its humans. He seems to be obsessed with Betty, but not as a target. Instead he kills her boyfriend Stefano (William McNamara, SURVIVING THE GAME) and forces her to watch using the only-in-Argentoland method of tying her up with a row of sewing needles taped under her eyelids. 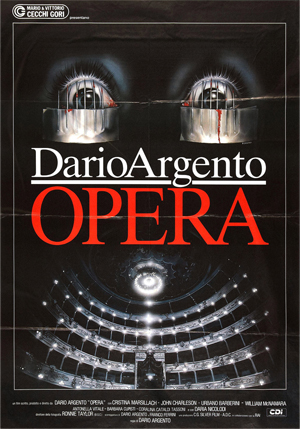 Not just once, either. He keeps killing people, with her as a witness, and she keeps not telling the police – not even Inspector Santini (Urbano Barberini, DEMONS, GOR, CASINO ROYALE), who has already questioned her about the murders. The movie has a motif of watching, and eyes, and (demonstrating a strong understanding of what causes me to squirm) the vulnerability of eyeballs. The needles seem to only touch her eyelashes, and we never see the source of the blood drops they apparently cause, but it hardly matters. Just showing eyes in extreme closeup, even without sharp objects threatening them, or any objects near them at all, makes them look like such delicate, endangered objects.

Eyes are especially important in the scene where Betty puts in eyedrops just before Santini’s assistant is supposed to come to keep an eye on her. She lets him in but she (and we) never see him, because her vision is blurry, and then he disappears just before someone else claiming to be the assistant knocks on the door. Betty’s agent Mira (Daria Nicolodi, DEEP RED, INFERNO, PHENOMENA, MOTHER OF TEARS) tries to identify him through the peephole and he fires a bullet right through the peephole into her eye.

We also have many extreme closeups of raven eyeballs, emphasizing how impossible birds are to read. Most incredibly, a raven is used as an eyewitness who identifies the killer by swooping down and plucking out one of his eyeballs in front of the panicked opera crowd. The eyeball is then seen on the floor being picked at and eaten (not sure if it’s by the same raven or a different one, there’s a whole swarm).

As in most horror movies, there are many shots to suggest our heroine is being spied on by the killer. Sometimes the camera focuses on the vents, as if someone is watching through them. This sets up a beautifully crazy twist where a little neighbor girl pops out of one of the vents telling Betty to come inside to escape the killer. Not only does it reveal that the person watching before was not nefarious at all, but it reveals a rounded air conditioning tunnel that resembles a miniature version of the halls in the opera house. And this kid uses it to watch all the apartments on the floor like little operas.

And that’s just a little tangent that the movie goes on for a few minutes! Once the tunnel has been used to rescue Betty it’s not really needed anymore.

In Betty’s apartment there’s a shelf with some books, CDs and VHS tapes, and I couldn’t stop noticing Jack Nicholson’s GOIN’ SOUTH prominently displayed, sideways on top. I could also make out WHO’LL STOP THE RAIN, MYSTERY MANSION and SILKWOOD. I don’t think there’s any significance, but I still want to note it.

I like Betty. Apparently Marsillach didn’t get along with Argento at all, or I’m sure she would’ve been in more of his movies.

There’s a meta aspect in the fact that opera director Marco is said to come from directing horror movies. Argento says it’s not really meant to be autobiographical, and the character doesn’t look like him at all, but he’s a respected weirdo horror director. And Macbeth is Argento’s favorite opera, which he would actually direct in real life years later. Also, in the final scenes Marco is in the Swiss Alps filming a fly tied to a string, a direct reference to PHENOMENA.

Marco is the character who seems the most suspicious, insinuating himself into Betty’s life, showing up and disappearing conveniently close to the killer’s appearances, at one point explaining his knowledge of her being attacked with a questionable story about calling her apartment and talking to a police officer. So there’s this tension – if the famous horror director turns out to be the killer, what is Argento saying about himself? On the other hand it could be a misdirect. He won’t be the killer, and it’s Argento’s way of saying come on dude, this is art, stop assuming I’m a psycho.

WHO-THE-KILLER-IS SPOILER. So it’s kind of a relief when the killer is revealed as Inspector Santini, an authority figure, not an artist. A cop, not an Argento alter ego.

Except… maybe he is? We have this killer who is, in effect, staging his own horror movie for Betty. Choosing the angle and everything. He wears a mask, she says he never allows her to see his face – just like we don’t see a director’s face behind the camera. And he has an assistant named Soave, played by Argento’s own second unit director, Michele Soavi.

So I don’t know, maybe this is a war between two sides of Argento’s personality. If so, the murdering one technically wins, stabbing the artistic one to death shortly before his own head-bashing and arrest.

It’s a crazy fuckin ending. I mentioned that the setting is an in-joke about PHENOMENA, but I doubt I’m the only one thinking this is some kind of demonic THE SOUND OF MUSIC parody when Betty runs through the grass chased by the killer, heavy metal guitars blazing on the soundtrack. After Mark is stabbed she uses the old “pretend you’re on the killer’s side” technique to get him to let his guard down so she can hit him over the head with a rock. Two dogs run by, which seems like a weird detail until you realize they’re part of a huge squad of police showing up just now.

That’s already a hell of a finale there: the abrupt shift from peaceful epilogue to seeing on the news that Santini faked his death to suddenly being attacked by him to realizing he arrived only a couple minutes ahead of an international dragnet. But Argento piles on the weird-sauce by having Betty – who does not seem at all disturbed by her boyfriend being murdered in front of her like two minutes ago, and hasn’t checked on him or mentioned him to the police – smile and crawl in some grass looking at beautiful flowers, talking to a lizard, as we hear her internal monologue about her love of nature. She seems in great spirits and I would argue that she is not taking this well at all.

Really my only complaint is that the musical tastes of late ‘80s Argento can’t compete with Argento of the ‘70s. The opera music is timeless of course, but during murder scenes it often switches to heavy metal that can’t dare to compete with the classic Goblin scores. (Music is credited to Brian & Roger Eno, Bill Wyman & Terry Taylor, and Goblin’s Claudio Simonetti, plus there are songs by the bands Steel Grave and Norden Light).

There are apparently different versions. In almost all of them Santini is dubbed by a different actor. The deluxe Blu-Ray offers it in two different aspect ratios – I took a gamble on disc 1. Although the version I watched had two parts where Betty narrates (always funny when first person narration shows up late in a movie) I have read about Argento himself doing narration. That must be even stranger, which I’m not against.

Brian Eno Claudio Simonetti Cristina Marsillach Daria Nicolodi Dario Argento Ian Charleson Ronnie Taylor Ubano Barberini William McNamara
This entry was posted on Thursday, December 12th, 2019 at 11:28 am and is filed under Horror, Reviews. You can follow any responses to this entry through the RSS 2.0 feed. You can skip to the end and leave a response. Pinging is currently not allowed.