Man, if it walks like a duck, talks like a duck… oh wait, this guy doesn’t walk like a duck. But the title slasher of NEW YORK RIPPER is a guy who makes quacking noises while killing, and in taunting phone calls.

Franco and Josh both recommended this Lucio Fulci movie to me, and I remember years ago when I first saw MANIAC somebody suggested it to me then. I gotta admit I don’t think it’s exactly good, but it’s definitely unusual and enjoyable to watch once. 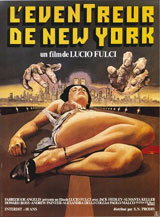 Unlike MANIAC it doesn’t seem to capture the filthy underbelly of the city. Instead it takes place in some weird fantasy European version of New York. Obviously the exteriors were filmed in the real place (with some nice time capsule shots of posters and theater marquees for AMERICAN WEREWOLF IN LONDON and REVENGE OF THE BUSHIDO BLADE and stuff like that) but everything about it feels giallo. The people look European, they talk dubbed with those not-quite-placeable accents, they say odd things and engage in weird sex acts like public foot-fucking of strangers. I mean, there’s a rich model-looking lady who goes to a live sex show in stockings, masturbates and makes an audio recording of it for her husband. This is what Lucio Fulci thinks of you, New York. Actually it might be a compliment, I’m not sure about this. But it’s weird.

In one scene a woman is murdered in a car parked on a ferry. When it reaches land nobody sees the bloody naked body so they just think some asshole isn’t driving off the ferry when he should, so a big truck just butts up against the car and pushes it off. Then they look inside to find the body. Is that really how they handle that in New York? We have ferries here and I think we’d look for the driver first, or at least try to put it in neutral. Maybe pushing parked cars is an Italian thing? Or a Fulci thing?

I don’t know, I know we got some New Yorkers on here. Do you guys think this is an accurate portrayal? I suppose they say it’s a big melting pot, right? So everybody is dubbed from Italian? I’m not the expert. I’m just saying this is not the same New York we know from the Spider-man movies and Ghostbusters.

The mystery aspect of it is pretty ridiculous, with laughable pseudo-science about blood types and phone tracing, lots of stiff cop dialogue and a subplot about a math genius being used to help the investigation in some way. And the solution, I gotta admit, I didn’t fully understand, even though a guy immediately gives an eloquent speech about the psychology behind the quacking.

But it’s got a good style. Some bold colors (a murder under red and green lights), some really fucked up gore (a razor blade eye-cutting as disgusting as the wood-shard-to-the-eye in one of the few other Fulci movie’s I’ve seen, ZOMBIE) and a groovy prog-rock and disco soundtrack to keep the energy up. Here’s the theme song to give you an idea:

Also this guy on Youtube made his own jazz version:

Definitely the best thing is that quacking. We’ve talked about creepy prank phone calls in movies like EYES OF A STRANGER and BLACK CHRISTMAS. This one I 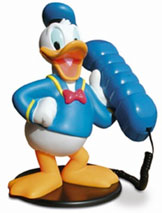 think poses a challenge to BLACK CHRISTMAS’s crown in that category. I mean, he’s talking in this little boy voice and keeps compulsively quacking. It’s like the bastard son of Mickey and Donald wants to be the new Zodiac killer. It’s just bizarre and unsettling. I would genuinely be scared if that fucker called me.

You know what I’d like to see is a hybrid of NEW YORK RIPPER and SUMMER OF SAM. It’s this epic drama about all these characters and what they go through during the summer of power outages and looting and a city brought to its knees by a maniac going around making duck noises and stabbing people. Also maybe cut in some shots from that live action Baby Huey movie.

Lucio Fulci slashers
This entry was posted on Monday, October 26th, 2009 at 3:15 pm and is filed under Horror, Reviews. You can follow any responses to this entry through the RSS 2.0 feed. You can skip to the end and leave a response. Pinging is currently not allowed.