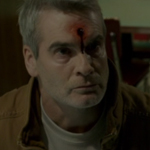 So it turns into a story about this gruff, seemingly heartless weirdo accidentally forming a bond with his young misfit daughter – a common format, I know, but one I’m always a sucker for. And then the gangsters notice there’s this person in his life, so the two things become intertwined.

I love the dialogue in this movie. Jack is always saying funny things but he’s completely deadpan because they’re not actually witty comebacks. He just hasn’t learned how to socialize. Like
when he answers the door to some thugs trying to intimidate him, he just says “Hi.” And he’s not trying to be a smartass, he’s just saying the greeting he knows you’re supposed to say. 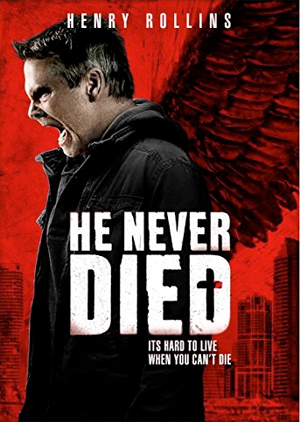 There are so many good exchanges. “So, what happened to your hand anyway?”
“Uh… (considers whether to lie, decides not to) someone shot me earlier today.”
“Seriously? Someone shot you? With a gun?”
“That’s how you get shot.”
“Why?”
“I actually don’t know.”

Or when he has to meet this kid Jeremy (Booboo Stewart, PIT FIGHTER), who he calls his intern, and finds him asleep in his car. When he wakes him, Jeremy asks “How long have I been asleep?”

“I don’t know how I would know that,” Jack says.

There’s a little bit of subtle commentary to Jeremy’s character. He’s in trouble because he borrowed money from the mob… to pay off his student loans. Not a gambling debt. Or, same thing maybe. I don’t know.

Jack is very casual about everything. Somebody hits him, he just shakes it off and hits back, doesn’t get worked up about it. They bust down his door and he just sits on his bed while they punch him in the face, try to shoot him. That time he was talking about where he got shot, he just put his hand over the gun, let it shoot through him. And he has your traditional action movie run-ins like dudes on a street trying to start something, guys in a bar, protecting a woman from an abusive ex, etc.

He doesn’t seem to concern himself that much with hiding his situation. When Cara asks him what he does he lists off several lifetimes worth of careers as if it’s normal. (I like that one of them is stuntman.)

Overall, historically, he has not been a great guy. He talks of epic massacres. But at some point he started trying to be a nice guy. That’s what the intern is about, he’s a hospital worker who brings him blood. He drinks it like a vampire. There’s a possible homage to CRONOS when he spills a bag of blood and licks it up off the floor. (It’s his own kitchen, though, not a bathroom, so it’s not as pathetic.)

Rollins is a great leading man. Funny, tough and weird, and after eating a little flesh again he changes physically, looking more alert, moving faster, at one point roaring with his mouth so wide it looks like he might dislocate his jaw. Todosey is good too, kind of reminds me of Darlene on Roseanne. Andrea is a mess but a sweetheart, and their relationship is nice.

A small thing that I appreciate: when the gangsters kidnap Andrea, we just hear about it from a threatening phone call, and we see the upsetting marks on her face much later in the movie when he finds her. That’s all we need to see – they don’t waste time or bum us out with the usual scenes where they cut back to her failing to escape and being beaten and the guard that’s trying to get rapey with her or whatever. Thank you.

One of the villains is Steven Ogg, who played Negan’s right hand man Simon on The Walking Dead. Here he’s a suit wearing type of prick instead of a redneck type, but he’s got that same joy for being an asshole. A good bad guy. You like to see Jack go overboard with him.

Thank you Mr. Majestyk and others who recommended HE NEVER DIED as a good action-horror movie in the SILENT RAGE comments. I’ll keep an eye out for future movies from writer-director Jason Krawczyk. According to IMDb they’re in post-production with a sequel or companion piece called SHE NEVER DIED, written by Krawczyk but with a new director, Audrey Cummings. This Bloody Disgusting article makes it sound like it was originally going to be a continuation but was rewritten for a new immortal character so Krawczyk and Rollins can work on an expanded mini-series remake of the first movie. The official synopsis seems like they might not have changed much. This character Lacey’s story happens “after saving her estranged daughter from her criminal past.” Sounds good to me.

Booboo Stewart Henry Rollins Jason Krawczyk Jordan Todosey Kate Greenhouse Steven Ogg
This entry was posted on Tuesday, October 23rd, 2018 at 11:09 am and is filed under Action, Horror, Reviews. You can follow any responses to this entry through the RSS 2.0 feed. You can skip to the end and leave a response. Pinging is currently not allowed.

10 Responses to “He Never Died”