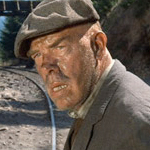 The opening scene sets the stakes high. Under a somewhat amusing Marty Robbins theme tune that personifies trains, the Shack chases down some poor guy trying to ride his rails and whacks him on the skull with a big metal mallet, like he’s Vinnie Jones in THE MIDNIGHT MEAT TRAIN. We have to hear the man’s screams as he falls and tumbles beneath the wheels and is left on the tracks separated into two pieces. Horrible.

So we know this isn’t a game when A-No.-1, carrying around a live chicken and using it as a club to beat off would-be thieves, deftly sneaks into a cattle car but has his location given away by a younger guy played by Keith Carradine (BOBBY Z), a weasely dick who keeps referring to himself as “ol’ Cigaret” as if remembering himself fondly. Trying to act-as-if himself into legend status.

In 2018 we have an ever-growing homelessness problem. I’ve watched the tent cities and sidewalk encampments get bigger and more common in my city, seemingly at the same rate that buildings are wrecked and replaced with condos for potential 22 year old tech people. I don’t know if there’s any national culture of homeless people – I guess maybe we’d have read about it. But EMPEROR OF THE NORTH portrays a time when the extreme poverty of the Depression led to survival methods and traditions that became a way of life that men like A-No.-1 could master and teach to the up-and-comers. They followed rules, built communities, learned the dangerous trades of train-hopping and thievery, created codes for communication, even titles like emperor (though that’s not what A-No.-1 is or strives to be). 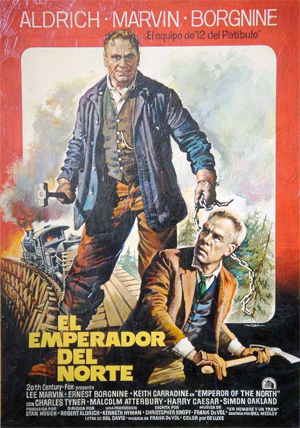 So the movie shows some of this underworld, and their ways of betting on and making official A-No.-1’s intention to best The Shack and his shack diesel shack fu. But to my surprise there’s another another world beneath the one you live in that’s just a sugar-coated topping: that of the railroad workers who recognize The Shack is a crazy asshole – he scares and mistreats them too – and have a whole gambling racket and dream of somebody getting past him some day. (But out of honesty or Shack-fear they don’t help A-No.-1 get away with it. They genuinely try to catch him.)

It’s a hell of a journey and battle. There’s a ton of footage that’s clearly the real actors walking on moving trains, and none that looks fake. There’s danger of train crashes, ways of hiding, dirty tricks played by The Shack. They come off the train and catch up other ways and get back on. There’s an intense sequence where Shack stops the train on a bridge and the crew goes around and checks for stowaways. Cigaret is forced to climb onto and under the bridge to get away. He finds A-No.-1 in a ravine with his legs kicked up on some junk, casually continuing a conversation from earlier like nothing happened.

A young Sid Haig can be spotted in a community of hobos they visit. He had also been in POINT BLANK with Marvin. He actually looks kinda handsome in this movie.

Shit does get ugly. Some sympathetic members of the train crew end up fucked up bad in a crash. Shack doesn’t give a shit. You could take this event as a sign that A-No.-1 isn’t as honorable as you’d like to think, since his actions have contributed to this mess. Or you could take it as harsh, divine punishment for complicity in an unjust system. In the end, A-No.-1 does prove himself more honorable than Shack.

One kinda funny touch is how long during the climactic fight in an empty car a fire ax is in plain view. You keep being more and more amazed that nobody has decided to use it yet.

This is a great role for Marvin because it requires his usual grit, grouchiness and blunt cynicism, but also a bit of his CAT BALLOU comedic goofiness, and he has to be kind of lovable in ill-fitting suits. But most importantly he’s easy to buy as this guy who has experience and know-how about each and every damn thing that could come along. What to do if trapped inside a car. What to do if a guy drags a big metal dildo on a rope beneath the train so it will bounce around and smash against you. How to take advantage of a baptism. How to get a train to crash. When he starts gathering up empty, discarded buckets from a trash pile you just have to watch him doing it, and Cigaret watching him doing it, and then joining in, long before it can be revealed what he intends to do with them.

And Borgnine is arguably even better. You believe him as a heartless, sadistic asshole, one of these guys who gets too wrapped up in his occupation and uses it as an excuse to dehumanize people. It’s my job to keep people from getting a free ride, therefore I can extinguish human life. They’re just bums anyway. Consider that there’s not even some peaceful means he tries first before trying to kill people. He just swats them off like bugs.

But also he has this amazing vulnerable moment when he’s walking around the train looking for freight-hoppers, and a bunch of tramps are on the sidelines yelling stuff at him, basically heckling him. And Borgnine has this incredibly authentic look in his eyes that’s not reacting to these people in anger, but clearly aware of them. Making an effort not to give them what they’re looking for. And kind of scared.

The title EMPEROR OF THE NORTH POLE comes from a common hobo joke – the idea is that these guys are fighting over something essentially worthless, like being the ruler of a frozen unpopulated land. But after its initial release they apparently believed people were mistaking it for a Christmas movie, so they shortened it, and now it doesn’t really make any sense. Like WHEELS ON MEALS.

Here’s something kind of amazing: a dude who made his own custom model of Lee Marvin as A-No.-1. 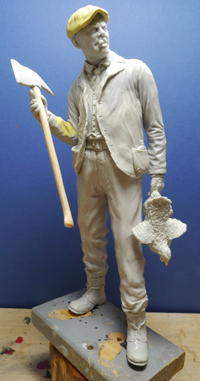 Director Robert Aldrich (THE DIRTY DOZEN) did this one the year before he did THE LONGEST YARD. It’s classier than that one. Screenwriter Christopher Knopf was one of the writers of 20 MILLION MILES TO EARTH, but mostly he wrote cowboy shows (The Restless Gun, Wanted: Dead or Alive, The Rifleman, The Texan, Zane Grey Theater, Cimarron Strip, etc.). The script was unofficially based on books by “King of the Hoboes” Leon Ray Livingston and Jack London, who travelled together and used the names A-No.-1 and Cigaret, respectively. Which is surprising because I would not think this Cigaret would go on to write famous books about dogs and adventure. Maybe getting so thoroughly schooled by the best made him straighten up his act.

The real A-No.-1 was a real Emperor of the North Pole – he’s credited with perfecting the hobo symbol system and writing twelve books about the life. He wasn’t actually poor, he just liked living on the road. He was so legendary that people would often pretend to be him, so he took to carrying a scrapbook autographed by Taft and Roosevelt, copies of his books and two fifty dollar bills as proof of his identity.

For London it was activism – he was a member of Kelly’s Army, a group of unemployed “stiffs” (many of them former railroad workers) headed for Washington as a protest, following the lead of a group called Coxey’s Army. According to Wikipedia, “The purpose of the march was to protest the unemployment caused by the Panic of 1893 and to lobby for the government to create jobs which would involve building roads and other public works improvements, with workers paid in paper currency which would expand the currency in circulation, consistent with populist ideology.”

I’m not trying to say EMPEROR OF THE NORTH is timely, or that it is necessary for us to watch to understand the near future and the skills we’ll have to develop to survive. But it’s a hell of a story in a fascinating world and it has two incredible actors having a grimace-off, a showdown, all but banging their I-imagine-three-times-thicker-than-the-average-human skulls against each other to establish dominance. I haven’t seen another movie like it. I bet you would love it.

Ernest Borgnine hobos Jack London Lee Marvin Robert Aldrich trains
This entry was posted on Wednesday, May 2nd, 2018 at 10:07 am and is filed under Action, Drama, Reviews. You can follow any responses to this entry through the RSS 2.0 feed. You can skip to the end and leave a response. Pinging is currently not allowed.

29 Responses to “Emperor of the North”