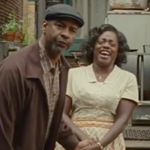 There’s no mistaking that this was a play. It’s all talk talk talk, mostly by Denzel. Lots of telling stories. And it mostly takes place in his small backyard, kitchen and living room. He plays Troy Maxson, a bitter garbage man in racially discriminating 1958 Pittsburgh. Ten years before NIGHT OF THE LIVING DEAD. He thinks he might get fired because he recently took a stand and asked why only white men get to drive the trucks. He likes to come home from work, shoot the shit and pass around a bottle of gin with wife Rose (Viola Davis from the Jesse Stone movies) and his co-worker Bono (Stephen Henderson, RED HOOK SUMMER, MANCHESTER BY THE SEA).

Eventually we meet Lyons (Russell Hornsby, GET RICH OR DIE TRYIN’), his adult son from a previous marriage, and Cory (Jovan Adepo), his teenage son. He has ongoing conflicts with both, tensions that Rose tries to soothe. Bono also throws in a quick bit of calm while mostly trying to stay out of it. With Lyons it’s about wanting to borrow money, with Cory it’s about quitting his job so he can be on the football team. We start to see that in both cases the problem comes from Troy’s resentment about not achieving his dream of playing pro baseball. He played in the Negro Leagues I guess, but the breakthrough of Jackie Robinson (who he says wasn’t shit) happened too late for him to benefit. And rather than being happy that his sons can gain from his own hard work and society’s slow progress he wants them to have to suffer through shitty jobs just like him. 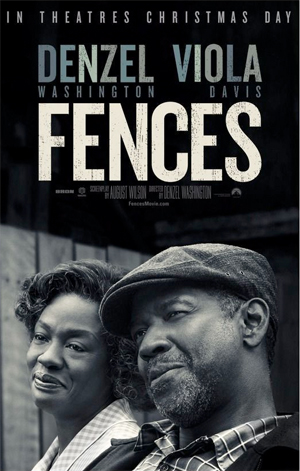 And then we meet Gabriel (Mykelti Williamson, MIRACLE MILE) a big guy in ill-fitting clothes, with a trumpet roped to him, walking down the street like a B.F.G. with a bunch of kids he doesn’t seem to know are making fun of him. Troy and Rose chase the kids away and invite Gabriel in for biscuits, and it took me a minute to figure out this is not just a neighbor they help out, this is Troy’s older brother, who acts this way because of a brain injury suffered in WWII combat. Troy takes care of him but is ashamed that his house was bought with a government payout for the injury. Troy is not happy with where his life is and even what he has came from someone else’s sacrifice that he seems to think deep down he took advantage of.

These grievances are a bomb and the fuse is about to be lit when a shameful secret comes out. And as much as this is a vehicle for Denzel’s SAG-award-winning bluster, the movie absolutely belongs to Viola Davis. Rose loves her husband, she laughs and has a good time with him, she also has to listen to him all the time and knows how to pop in and push back a little, remind him of a fact that he’s conveniently leaving out, or that she’s heard this story a million times, or a reason why he’s wrong. Her life is as hard or harder than his, but he doesn’t seem to include her struggles in his personal story of injustice. If you’ve seen the trailer maybe it seems like she’s gonna be shouting and crying all the time, one long Oscar clip, but they’re showing the crescendo after a long buildup. In fact she’s almost like Stallone in FIRST BLOOD, keeping it all internal until the dam can’t hold anymore and it explodes.

And she does that scene with a bunch of snot on her nose. Even without that, she makes complex, writerly dialogue feel completely natural. In a long career of greatness this is a highlight.

But the whole cast is great. I’m curious how other actors portrayed Gabriel. At first it seems too obvious to cast Bubba from FORREST GUMP in a role like this, but I also can’t imagine another actor finding such warmth in a frankly kinda cartoonish character. At first glance he looks straight out of SONG OF THE SOUTH, but he gets a couple of the most powerful moments in the movie, like when he doesn’t understand that he’s interrupting a confrontation that will end a marriage.

The one minor thing nagging me about the movie, that most people probly won’t agree with, is that Denzel, at least with all the baggage of the types of characters he normally plays, feels a little weird in the role. I guess this could be an asset, but to me it felt just slightly off that this bitter, self-absorbed asshole who never really redeems himself often comes off like he’s supposed to be a typical abrasive-but-wise Denzel hero. The famous scene where Troy cruelly yells at his son about not being required to love him kinda comes off like a coach giving a righteous tough love speech that’s gonna turn this team around and win us that championship.

It’s probly worth that slight awkwardness to see Denzel flipping out and yelling at the grim reaper. I don’t know how many actors would be better at that. Plus, the Washington-Davis dramatic team is unstoppable. And ultimately it’s up to the rest of the cast to take it home, and they do.

When producer Scott Rudin approached him with Wilson’s screenplay for a FENCES movie, Denzel didn’t think it was right yet, and said he just wanted to do the play instead. So all of this cast except the two juveniles did a run of the play on stage together, which explains how well they were able to gel by the time the cameras were on. Apparently Tony Kushner (MUNICH) finished the adaptation after Wilson died, though he just gets a producing credit. I like how they stage it. The opening conversation takes place with Troy and Bono rolling through town on the back of a garbage truck, but that’s the most cinematic it gets. They don’t try to open it up too much, but they give it a realistic on-location look, like an amazing play being performed on your neighbor’s stoop.

Regional note: Though Wilson was from Pittsburgh and lived for many years in St. Paul, Minnesota, he spent the last 15 years of his life here in Seattle. So I thought it was kind of cool to see this at the SIFF Cinema Uptown, a theater two blocks from August Wilson Way. That’s a road on the Seattle Center grounds that leads to the Seattle Repertory Theatre, which was the only theater to produce Wilson’s whole 10-play cycle and his one-man show.

August Wilson Denzel Washington Jovan Adepo Mykelti Williamson Russell Hornsby Stephen Henderson Viola Davis
This entry was posted on Thursday, February 9th, 2017 at 11:54 am and is filed under Drama, Reviews. You can follow any responses to this entry through the RSS 2.0 feed. You can skip to the end and leave a response. Pinging is currently not allowed.