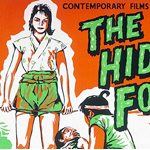 Let’s face it, I’m stupid to not have seen all the Akira Kurosawa movies. Usually when I see one it becomes my new favorite movie. HIDDEN FORTRESS is my latest favorite movie.

It’s another one with Toshiro Mifune playing a badass warrior, but it starts on two buffoonish peasants, Tahei (Minoru Chiaki) and Matashichi (Kamatari Fujiwara). They’re all dirty and their clothes are torn up and they’re arguing, blaming each other for the shit they’ve just been through. One of them got the bright idea they could make money fighting with the Yamana clan, but they got to the battle too late and were mistaken for the losing Akizuki clan and forced to help bury all the dead bodies. And shortly after this they get taken prisoner again, locked up in the vanquished Akizuki castle and forced to dig for their hidden gold until there’s a riot and they escape.

On the lam they accidentally break a stick that has a piece of gold inside, marked with the Akizuki seal. What the hell? And while they’re checking all the sticks in the area for more gold they run into Mifune. He starts bossing them around without telling them he’s General Makabe Rokurota of the Akizuki clan and that he’s trying to sneak the clan’s gold and their sixteen year old princess Yuki (Misa Uehara) to safety.

When the boys tell Rokurota their plan to get past the border he starts laughing hysterically because it’s actually a good strategy. He decides to use their greed to get them to help carry the gold, with Yuki dressed as a regular schmo and pretending to be mute so nobody (including them) hears her high class diction or accent or vocabulary or something.

This is the only Kurosawa movie I’ve seen where the best character is a female. Disguised in a shirt and short shorts that could pass for modern summer attire, she’s first spotted from a distance standing in a super hero pose on top of a mountain. So she already seems spunky before Tahei and Matashichi find her in the woods and sleaze on her. She smiles and turns her back on them, they follow lustily but she spins around and slashes them using a twig as a sword, bumps their heads with branches and trips them with vines.

She’s just a cool kid, you know? She has an attitude, she prefers to pout, but throughout her adventure we see her enjoying so many aspects of life: riding a horse for the first time since her exile, fucking with these dipshits who are planning on stealing the gold and think because she’s mute that she’s also deaf and doesn’t hear their scheming, totally letting loose dancing and spinning around and singing along at the fire festival they come across.

Rich girl living it up at Burning Man, I guess, but she belongs there. She’s a natural, and what she learns from the experience both changes and saves her life.

At times it’s a funny movie in the sense of the ’80s action comedies, like Riggs using some crazy ruse to outsmart a criminal in a LETHAL WEAPON. I’m thinking specifically of the scene where, to get past a heavily guarded border gate Rokurota walks right up and gives them a piece of the gold, saying he found it. When they won’t give it back he demands a reward, attempts a sit-in and otherwise causes a scene until he and the whole group are shuffled out – on the other side of the border.

The payoff is after they’ve left, and the guards all go and sit back down, laughing and clearly so proud of themselves for showing that guy what’s what. And then immediately a messenger comes up telling them to be on the lookout for a group exactly matching the description of who they just left through.

There’s a bunch of great action in this, especially a stretch that happens when some soldiers on the road get suspicious of them and Rokurota kills one. Two others take off, and he can’t let them tell the others where they are, so it’s a high speed horse chase. But then he rides right into the camp of an old rival, General Tadokoro (SANSHIRO SUGATA himself, Susumu Fujita) and, surrounded by an army, he’s forced to accept a challenge, which turns into a very elaborate duel with long spears, moving all through the camp and slashing through a series of banners (are they using real blades!?). I love the fight but you know how I love the samurai honor shit, so the real payoff is when Tadokoro admits defeat and kneels down to accept his head chopping and is shocked that Rokurota is like “Nah.” He considers him a friend. He just says “We will meet again” and tosses his spear to the soldiers.

And he’s right, they meet again, and Tadokoro is pissed! Rokurota, after hanging out with the princess, is trying out this “having feelings” business. Tadokoro is sticking with the old policies so he feels humiliated to have lost and still be alive.

As great as that whole subplot is, there’s something even better, a particular moment that’s just one of those priceless highs that we’re always seeking and only getting on special occasions like an Akira Kurosawa masterpiece. It’s what I call an “Oh Shit, It’s On” moment and at the same time it’s The Look, the great thing where two badass characters communicate that they’re about to kick ass by making eye contact, no words. Sometimes a nod. But it’s even more than that. It’s a culmination of many things that intersect at the exact moment that a weapon is passed from one hand to another.

So Princess Yuki has been traveling in disguise, and pretending to be mute. She has been scoffed at and underestimated by Tahei and Matashichi, who see themselves as above her, even though they’re actual lowly peasants and she’s just faking it. “It’s a bad idea to take the girl. She’ll slow us down. What if she blabs?” She’s been called a brat by people who will later give their lives for her, though they don’t understand the correctness of her rebellion, and believe she is emotionless when privately she cries for the people who have died. And on this journey she spends time with this brave general, and she witnesses the life of peasants, both miserable and joyous, and cares for them even more. When she comes across a man trying to pimp and/or sell off a farm girl (Toshiko Higuchi) – and finds out she’s from her clan, captured in the war – she decides to buy her freedom.

Rokurota is against it. He has to protect his princess, he doesn’t want to have someone else to look after, someone to be distracted and slowed down by. But the Princess has been refraining from speaking by his request, and she feels that’s far enough. “You cannot make my heart mute too!”

That’s a great moment, but it’s not the moment. That comes later on, after they’re traveling on the road, and having an extra female in their party causes soldiers to not realize they’re the ones they’re looking for. Unmuted heart saves the day. The farm girl (who speaks so rarely I thought she was an actual mute) insists on staying with them. From the look she gave the princess when she first saw her, maybe she looks familiar to her. And she must have her suspicions after she hears soldiers talking about who they’re looking for, and realizes it’s them. She looks horrified, either at the danger she’s found herself in, or at the temptation to turn them in for the reward. But Yuki saved her, so the girl often stands in front of her like a shield. When she overhears Tahei and Matashichi drawing straws to see who gets to molest the princess while she’s asleep, the farm girl stands guard with a big rock, ready to crush their heads or their little dicks or whatever gets too close to Yuki.

Another great moment. But the one I’m talking about happens after that when the shit hits the fan, the group is trapped and surrounded and not gonna be able to hide or run anymore. And Rokurota pulls out his sword,  and puts it in Yuki’s hand as they exchange The Look.

And the farmgirl has her own look – a look of recognition that Oh Shit, It’s On. A look of realization that yes, holy shit, this was not just some mute peasant girl she’s been traveling with, this is god damn Princess Yuki, heir to the Akizuki clan and highly skilled swordswoman. Like, she had her suspicions but now that it’s definitely real she’s got goosebumps on her goosebumps.

Or that’s what I thought was going on. On his commentary track on the Criterion edition, historian Steven Price explains that he’s giving her the sword so she can commit suicide before she’s taken. That’s a hell of a heavy moment in a different way than I realized. But it’s still badass because she takes the sword and the run away together, bullets flying over their heads. The farm girl is wounded and begs them to leave her behind – “I’m not worth it!” – but Rokurota, who previously did think she wasn’t worth saving, ties a bandage on her, picks her up and carries her on his back.

This is a beautiful movie both on the surface and underneath. It’s fun, it’s moving, people learn, they laugh, they bond, they persevere.

Of course I’ve always heard of HIDDEN FORTRESS as the Kurosawa movie that inspired STAR WARS. That is true but a little blown out of proportion. The big part of it is the two peasants, Tahei and Matashichi. They gave Lucas the idea of telling the STAR WARS story through the eyes of “the lowest characters,” in his case two droids. But the duos are very different. Both are bickering life partners who get mixed up in an adventure. But neither of them is heroic like R2. They’re both greedy and gross and in addition to planning to rape the princess, they try to steal the gold early on and try to snitch near the end.

An early draft of STAR WARS took more influence, having an older Jedi character similar to Rokurota, and using Mifune’s head-scratching trait from other roles. And there was a scene specifically based on a HIDDEN FORTRESS scene but with him riding a bird instead of a horse.

Other than those things, I guess there is a hidden base in STAR WARS. There is the speeder bike chase in RETURN OF THE JEDI that’s a tiny bit like a horse chase here (most likely coincidence). And Vader without his helmet does resemble Tadokoro at the end when he has a scar on his face and betrays the villains to redeem himself, like Vader does.

There are also a few parallels between Yuki and Padme in the prequels. Both do the Prince and the Pauper thing of traveling in disguise and learning things they didn’t know about how it really works out there. And both have a loyal double who dies in their place.

Oh, also the widescreen (it was Kurosawa’s first in Tohoscope) and the use of wipes and some of the pacing and compositions made an impression on Lucas. You can hardly blame him.

Akira Kurosawa Toshiro Mifune
This entry was posted on Wednesday, February 8th, 2017 at 9:08 am and is filed under Action, Reviews. You can follow any responses to this entry through the RSS 2.0 feed. You can skip to the end and leave a response. Pinging is currently not allowed.

9 Responses to “The Hidden Fortress”