The original CLASH OF THE TITANS has most of the things I don’t like about ’80s fantasy movies: a bland, dorky hero (Harry Hamlin), slow pacing, stiff action, lifeless settings in dusty wastelands or fake-looking soundstages, interchangeable nameless non-characters in helmets or robes. On the other hand it has the best and final pre-retirement work of stop motion monster legend Ray Harryhausen. These are really cool depictions of Greek mythological monsters and other shit – Medusa, a two-headed pooch, a giant buzzard, etc. – and that’s enough to make it stand out and be worth watching. Most fantasy movies don’t have that.

At the time stop motion animation was actually state-of-the-art for special effects. That’s how they did the snow-kangaroos in THE EMPIRE STRIKES BACK the same year, and the bike-over-the-moon in E.T. the year after that. It would continue to be impressive as late as ROBOCOP in 1987. It’s funny because that doesn’t seem like that long ago to me but when you see it in these movies it seems so retro and quaint. I wonder what the hell somebody’s gonna invent in 20 years that’s gonna make AVATAR look goofy and adorably fake? 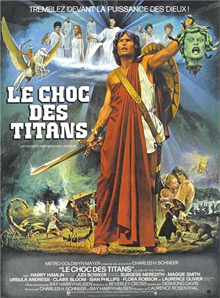 Loosely based on various Greek myths, the story is basically about how the gods are always fucking with each other by manipulating the mortals on earth. Zeus (Laurence Olivier, no shit) and the others stand around in white robes on one set and pretend to get along, but secretly they’re cursing people and sending them after each other and moving around little dolls of the humans on a playset to control their lives.

It all starts with this king that thinks he’s gonna die if his daughter has a son so he locks her up but Zeus impregnates her so the dad tries to be responsible about it and locks her and the baby up in a coffin and sends it off to sea. That pisses off Zeus so he tells Poseidon to open up the cage that has the giant Kraken monster underwater so it will wreck shit up.

Also Maggie Smith plays some goddess who has a son named Calibos (Neil McCarthy, WHERE EAGLES DARE), who was gonna marry Princess Andromeda (Judi Bowker) until Zeus cursed him to look like a fucked up hairy dude with a tail and horns (portrayed by makeup in closeup, stop motion when it shows his body). This is like a half hour into the movie, so the baby from the underwater coffin has somehow grown up to be Perseus (Hamlin). As a half-god he gets the very best so he has none other than Burgess Meredith as his trainer. He gives him a magic invisibility helmet, a magic shield and a magic sword, but the nitwit leaves and forgets the sword. Still, he captures and tames Pegasus, follows a giant buzzard that carries Andromeda’s soul away in a cage whenever she falls asleep, cuts off Calibos’s hand and wins Princess Andromeda in a kingdom-wide riddle sweepstakes.

This would all be fine for everybody except Calibos, but shit gets real due to an etiquette faux pas at the wedding: Andromeda’s mom says she’s as beautiful as Maggie Smith, so Maggie is offended and talks through a giant statue to demand Andromeda get chained up and sacrificed to the Kraken. You know, it seems silly to us but I know some people take all that wedding protocol real seriously, so I don’t want to be judgmental about it.

Well, we’re well into this movie, might as well have an epic quest. Perseus takes some guys (not sure if we ever hear their names) to meet the Stygian witches, find out how to kill the Kraken, this sends him to face Medusa, I think you know the drill. Also he has a robotic owl named Bubo.

Luckily all the best stuff is in the last half, so it does have some build to it. The scene where he faces Medusa is definitely the highlight. While Calibos and even Pegasus frequently switch between stop motion and human/animal actor, Medusa is the one character who is all stop motion puppet. She has a hideous scaled face and snake body and she slithers around. It doesn’t look completely real of course but it has some atmosphere to it due to the flickering fire in the room and the way she slowly moves around. She’s got the personality of an animal, not a monster that knows it’s supposed to jump out and say “BOO!”

Before that there’s also a real good fight with a two-headed dog. I mean, it’s a ridiculous scene because of the way they explain the mortals with non-magical swords having to fight the monster first: Perseus left his sword sitting on the ground and a big snake sat on top of it. What kind of a movie hero are you, Perseus? You’re only tough because of this magic sword and then you keep leaving it around everywhere. You’re like one of those people who just cannot stop losing their car keys or their cell phones. You need to get your shit together.

But the dog is great because he’s kinda vicious and then when Perseus hacks him with the magic sword he starts yelping and it’s like oh shit, dude, why are you slicing a doggy’s throat? Calibos has the same thing when he (SPOILER) dies. He’s an asshole but we know he was originally a regular guy who got cursed and then when he gets stabbed he crumples to the ground and wails in pain and you just gotta feel sorry for the ugly motherfucker. This was the Harryhausen secret, always trying to invest some sympathy into whatever monster he was animating.

Another great moment is when Perseus and crew are camped out at night. They’re all asleep, and the wind is whistling and blowing all the plants around. Medusa’s severed head is hanging up in a bag, and Bubo wakes up to see Calibos sneaking over toward it. I wish more of the movie had atmosphere as strong as this scene.

Blu-ray is kind of a funny format for this particular movie. It looks nice, but I’m guessing it emphasizes things that were conveniently hidden by all the previous formats. Some of the compositing looks really weird now, because you can really see how the live footage and the matte painting or the animation or whatever looks grainier or clearer or lighter. You can see strings holding Bubo up a couple times when he’s flying. The aftermath of Medusa’s beheading looks like somebody spilled a big pot of baked beans. I don’t mind, but if you do you might prefer the DVD.

I hate when people say the effects in this movie are laughable. To me just being dated isn’t enough to dismiss something so soulful. But in most other areas alot of people cut the movie more slack than I can. Yes, lots of cool monsters, but you compare this to other movies that came out in the couple years before or after it – STAR WARS, RAIDERS OF THE LOST ARK, CONAN THE BARBARIAN – it just seems so slow and dull. Does anybody care what happens to Perseus like they do Indiana Jones? I doubt it. More than anything it reminds me of TRON – a movie with astonishing (now out-of-date) technical accomplishments, but lifeless and lacking in energy, so that years later it’s more of a novelty than a movie.

Greek mythology Harry Hamlin Laurence Olivier Maggie Smith Neil McCarthy Ray Harryhausen
This entry was posted on Wednesday, March 28th, 2012 at 11:09 pm and is filed under Fantasy/Swords, Reviews. You can follow any responses to this entry through the RSS 2.0 feed. You can skip to the end and leave a response. Pinging is currently not allowed.