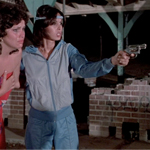 “It was this old guy with a gun, and some broad.”

ALLEY CAT is a shoddy but sometimes fun version of the urban vigilante thriller as well as the female assault-victim revenge story, the types of copycat movies made in the wake of DEATH WISH and MS. 45. Billie (Karin Mani, whose character was killed in the beginning of the similarly themed AVENGING ANGEL) is an adult woman in Los Angeles who studies karate, lives with her grandparents and as far as we know has no job. In the opening scene a neighbor calls to tell her someone’s stealing the tires off her car. She throws some clothes on, goes out there and tells the two thugs* crouched down by her car that “Okay guys, that’s enough.”

Of course, criminals in a 1984 action movie are not going to have a good grasp of gender equality, so one of them says “Hey bitch, didn’t your daddy ever teach you nothin? Never bother a man when he’s workin?”

*I know these days “thug” is racist code for the n-word, but I am old fashioned and using it to describe white guys who steal tires

So she karates the shit out of them and then her grandpa comes out in a bathrobe with a gun, fires a shot at them and they take off. It turns out they have a boss named Bill, who they find in a filthy apartment wearing only red underpants and a dog chain around his neck. He apparently instructed them to steal tires and since they can’t do it right he’s gonna go teach the interlopers a lesson. So he gathers up a bunch more creeps/punks (or “garbage people” as a character later in the movie would classify them), stalks Billie’s grandparents, robs and stabs them. Grandpa survives, grandma doesn’t.

The love interest of the movie is a young cop named Johnny (Robert Torti, who IMDb says played Dex Dogtective in FOODFIGHT!, but I’m not sure if that means he did lines that Charlie Sheen didn’t or that he did the terrible motion capture acting). Billie meets him cute by breaking his nose on a door when she storms into the hospital to find her grandparents.

In stubborn defiance of all the crime in her neighborhood, Billie likes to go jogging alone at night, often in remote parks. Her grandpa tries to convince her not to, but agrees to stand down if she takes his gun with her for protection.

Of course wouldn’t you know it, on her run she comes across two drunk guys trying to rape a woman at a picnic shelter in the park. She beats them up and has the lady call the police. Johnny shows up, but his older partner Boyle (Jon Greene, MANIAC COP) is an asshole. He arrests her for possession of a concealed weapon and trespassing.

These rapists, they work for that guy Bill too (or William Krug alias Scarface, the police file tells us). Their raping was not one of his assignments though. As Tom (Tim Cutt, uncredited first assistant director, ENTER THE NINJA) explains, “Me and Mickey, we went into the park and we climbed up on this bitch, ha ha ha.”

Speaking of Mickey, I wonder how the Walt Disney Company feels about a guy who says that wearing this t-shirt? 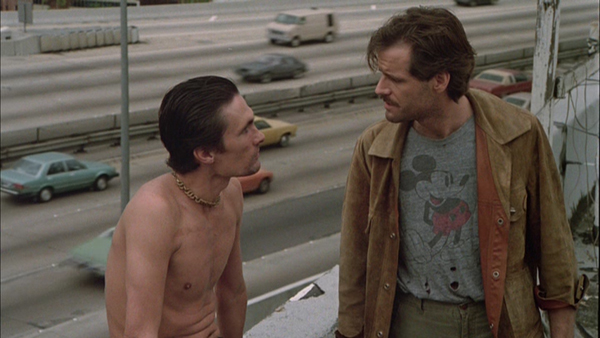 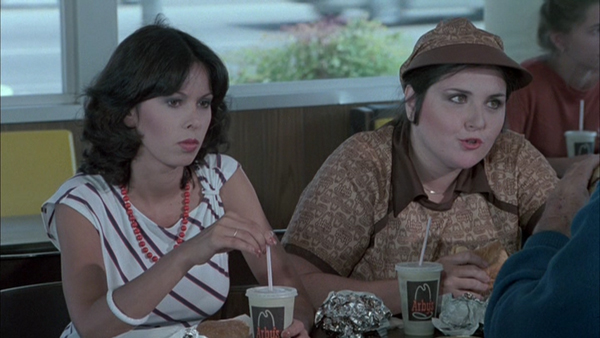 Again, Billie goes jogging at night, and this time a guy starts jogging next to her and talking to her. When she tells him to leave her alone he says “What, are you stuck up or something?” This is what alot of guys don’t understand about sexual harassment. Even if it’s mild and innocent, it can be constant enough to be oppressive. “But it’s a compliment!” this guy would say. Sure. It’s also a compliment when Tom Hanks gets constantly asked for an autograph, but at some point people should leave him alone so he can take a shit, otherwise they’re jerks. And Tom Hanks chose to be an actor, Billie did not choose to have boobs. Also, Tom Hanks doesn’t have to worry as much that the person talking to him actually has ill intent toward him.

Of course, in this case the complimenter does have ill intent. When Billie turns him down he jumps her, pins her down, starts talking nasty and threatening her. Luckily she’s able to get out from under him and beat him up.

I’m honestly unclear whether Billie is intentionally going out at night to attract these attackers so she can take her aggression out on them, or whether she is just asserting her rights as an American to do what she wants. A guy could go jogging at night and just have to worry about wearing reflective clothing. Why shouldn’t she be able to do the same?

Anyway, before the case comes up against Tom and Mickey, the first attempted rapists, Bill attacks the victim in her apartment and convinces her to drop the charges. The wimpy, incompetent district attorney blows the case anyway, so Billie makes a scene in court and, in the tradition of VIGILANTE, ends up being the one to do jail time. Kill the messenger.

Billie impresses her large, lesbian cellmate Sam (Moriah Shannon, “Venus Club Waitress,” DC CAB), who has the cell decorated with girly pinups and a picture of… carpet? Fur coats? Meat? I’m not sure. But it’s kinda ugly, isn’t it? 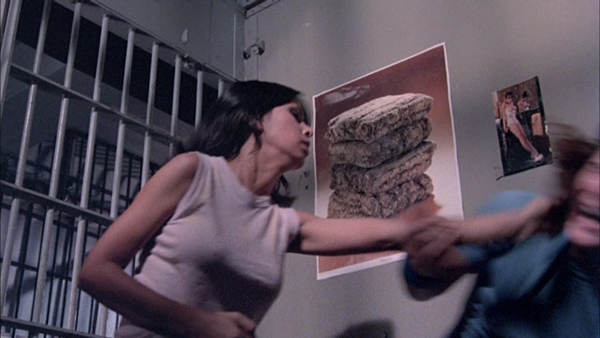 I guess that screengrab gives away that Billie has to beat her up. Just like the jogger in the park, Sam hits on her (trying to brush her hair and give her a massage), then when rejected pins her against the bars (“What Sam wants, Sam gets”). So Billie does what Billie does, and apparently it makes an impression. A scene later she’s leaving the jail on good terms with Sam and all the other inmates, who seem like they’re gonna miss her.

Meanwhile, Johnny is on the case. He seems like a clean cut nice boy, but his dark side comes out when he goes rogue to track down the garbage people. He pretends to hire a cute hooker who he knows has information, goes into her apartment, handcuffs her to her bed, finds her drugs and taunts her with them until she starts having withdrawals and agrees to tell him what he needs to know. “She talked her brains out!” he explains to Billie.

And the kicker of all this is that beforehand he refused to pay her fifty bucks and insisted on twenty five! Is being a cheapskate a more believable cover, or was it just important to him to degrade her further?

Free again, it’s business as usual for Billie. She goes jogging at night again, two guys in their car drinking beer chase her and try to rape her, so she beats them up and tells them “That’s not nice!” L.A. never changes I guess.

Johnny found out from the hooker which bar the Scarface boys hang out at, and Billie gets there before he does. One of her attackers is there sitting at the bar with a woman. Billie just walks up behind him, lights his cigarette for him and says “Hi there!” This is one of the best scenes, a big bar brawl with a bunch of more normal guys in tucked-in polo shirts standing around not sure what to do when a lady is beating up a dude.

But despite all the effort put into tracking these guys down, Billie finally gets to Scarface using her usual method, walking around at night as a woman. In this movie, a woman stepping outside a door at night is like dripping blood into shark infested waters. She just goes outside, there’s gonna be rapist garbage people nearby and they’re gonna smell her coming. It’s terrible.

She wears a funny hat to be mistaken as “an old broad,” but Bill goes after her specifically because he recognizes her as Billie. So the disguise is an unnecessary flourish.

This is not one of the best vigilante or female revenge or women of martial arts movies, but it’s got enough of the good shit to be fun. I would especially like to tip my hat to Michael Wayne, who plays Scarface. According to IMDb this is his only role. That makes me worry he might’ve died tragically, because I don’t see how this guy doesn’t end up at least playing a hundred alley muggers. Look at this guy: 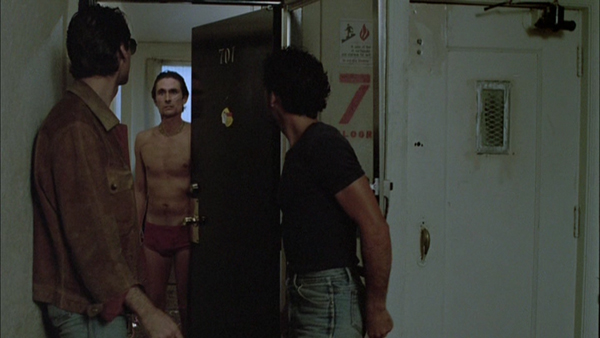 Great villain, with and without pants.

The other most notable thing about this one is that Billie, our female avenger, does not get raped. Usually in a movie like this you gotta endure a rape scene first before you can enjoy the lady killing a bunch of dudes. It’s not like the movie is completely free of that, because there are multiple attempted assaults. But Billie always stops them and they are not even the initial incident that starts her crusade.

And Mani acquits herself well. I’m not sure where she comes from – she doesn’t seem to be an established martial artist, and she looks like a model. But she has a good fuck-you attitude, never turns damsel in distress, and goes for it in the fight scenes. Of course it’s stylized, but it’s not one of the ones where it just seems like a model limply re-enacting choreography. She wails on some dudes, including ones who make interesting fashion choices for their backyard barbecues. She’s not the only one here who knows how to rock a headband. 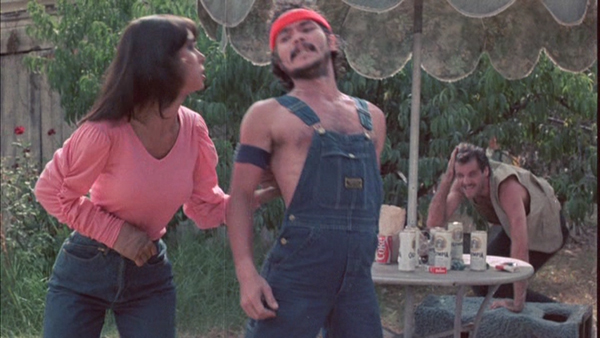 This entry was posted on Tuesday, December 30th, 2014 at 9:59 am and is filed under Action, Reviews. You can follow any responses to this entry through the RSS 2.0 feed. You can skip to the end and leave a response. Pinging is currently not allowed.