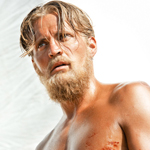 Anyway, Thor here comes up with this theory while living on an island, and he wants to write about it, but all the publishers of scientific books and magazines (I’m calling you out, National Geographic!) laugh him off as an idiot. He comes up with the raft idea but still has trouble getting funding, ’cause this was before Kickstarter. He has to go around talking to people who often think he’s a crazy man. Which he kind of is I guess.

There is some humor, including when he goes to meet the president of Peru but doesn’t know what he looks like and keeps calling everybody else in the palace “Your excellency.” The money is slow coming but he does manage to put together a 5 man crew including some tough guy WWII vets and an engineer who looks just like Andy Richter who doesn’t really offer that much to the team but he really wanted to go and he seems like a nice guy and everything, so why not? 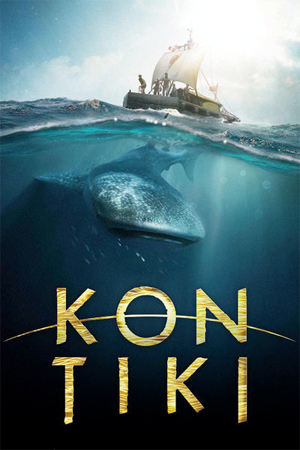 They meet a famous peg-legged explorer who advises them to always copy what the natives do, not use modern technology, because the natives have survived that way forever and they know what the fuck they’re doing. Thor takes this advice to heart in the building of the raft, though it has a pretty elaborate cabin, I kinda don’t think they were rollin with that much luxury back in the day. Also they bring radios and an inflatable raft (a raft within a raft!) And yes, he lets a guy with a film camera come to make a documentary (like Jennifer Lopez and Ice Cube in ANACONDA), but that’s not really an exploring cheat, it’s not like it’s gonna make anything any easier.

When they leave on the trip it’s sunny and they’re laughing about the danger they’re putting themselves into. Ha ha. But this journey is supposed to take about 100 days. Inevitably they get into a storm, get off course, get mad at each other, worry that the boat is gonna sink or fall apart, question the mission, lose hope, almost give up, almost die. They are frequently harassed by sharks, and the shark FX and/or footage are really impressive, especially for a non-Hollywood movie. They don’t JAWS it, they show the sharks quite a bit and I assume they have to be mostly CG but they look and move like real animals, not your usual SyFy beasties.

The crew are all blond and grow beards and sometimes some of them are easy for me to mix up. But they have a convincing ruggedness, I believed they could do this. Maybe it’s ’cause they start looking like One Eye from VALHALLA RISING after a while. You don’t usually see this many strong silent types in one enclosed space.

As their reward for filming a movie on the water, directors Joachim Rønning and Espen Sandberg (MAX MANUS, BANDIDAS) get to do the next PIRATES OF THE CARIBBEAN movie. I guess it’s kind of like how Joe Dante did PIRANHA and then they wanted him for every water movie, including a JAWS spoof movie that never happened. Actually this one might not be a bad choice, you can see from this movie that they could at least handle the look and scope of the PIRATES pictures.

The documentary that the actual rafters made won the best documentary Oscar in 1951, and in 2012 this movie here was nominated for the best foreign language Oscar. Of course, that didn’t stop the Weinsteins from releasing it in the U.S. with a menu that defaults to a version where they cut it from 118 minutes to 95. [update: I am informed that it is not dubbed, they cut it from a separate version that was shot in English.] This was after the Oscar nomination and it only played on 3 screens anyway so there’s no pretense of trying to make it more commercial for stupid people. It’s like that one butler said, some men just want to watch the world burn.

If you just want to watch a harrowing raft trip though, watch the original cut. The crew of the Kon-Tiki were on a raft for 101 days, I think you and I can handle 118 minutes on a couch.

adventure Espen Sandberg explorers Joachim Ronning sharks the god damn Weinsteins
This entry was posted on Tuesday, January 28th, 2014 at 2:47 am and is filed under Drama, Reviews. You can follow any responses to this entry through the RSS 2.0 feed. You can skip to the end and leave a response. Pinging is currently not allowed.