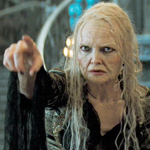 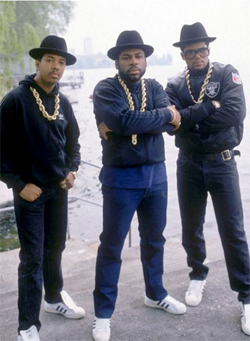 The hard part is that some of these summers are slim pickings for something appropriate that I haven’t seen already. I almost ended up going with MR. BROOKS for this summer. I kinda want to see it, but it’s not really the kind of movie I’m trying to celebrate here. I looked at the budget for STARDUST ($70 million according to IMDb) and I saw that it had lots of effects and movie stars and everything. It absolutely could’ve been a big summer movie if anybody went and saw it in a theater on purpose. That just wasn’t in STARDUST’s horoscope that day.

But I gotta admit it’s kinda good. It’s a fantasy movie about a magical kingdom and witches and ghosts and shit – not in the dry LORD OF THE RINGS vein, more like fairy tales. More like Terry Gilliam Lite. It’s directed by Matthew Vaughn before he did KICK ASS, and it turns out he’s better at being cute and whimsical than edgy and in-your-face.

Based on a book by comic-book-guy/BEOWULF co-writer Neil Gaiman, it’s about a wimpy young man named Tristan (Charlie Cox) who, to win the heart of the girl who ignores him (GI JOE’s Sienna Miller, the credits tell me), travels to a forbidden magical realm to retrieve her a fallen star. He finds the star in a crater but it turns out it’s alive, and it’s Claire Danes. Its name is Yvaine. (I used the subtitles.) I’m not clear if they’re saying that stars take on human form when they fall, or if this star was already Claire Danes floating up there in the sky. The second one especially would fly in the face of what I know about astronomy.

Come to think of it, falling stars aren’t even stars anyway, they’re meteorites. So how the fuck was she a star in the sky and then he saw a falling star and it was her. What the fuck is this bullshit. This fantasy world is a lie. Speak truth to power. 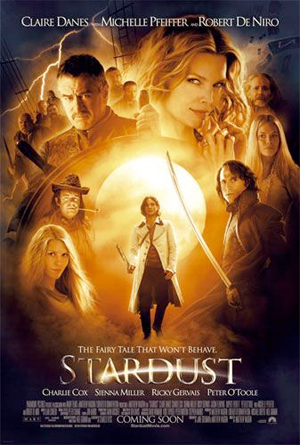 Anyway, there are alot of complications. 1, she was knocked out of the sky by a necklace, which she now has, which one of the 7 princes will need to become the new king when their dad dies. And also they gotta kill each other, so they’re kinda evil, and Mark Strong is trying to get the necklace. 2, it turns out if you cut out the heart of a star and eat it you get the ol’ eternal life, so an old hag witch (Michelle Pfeiffer, SCARFACE) is trying to catch her to munch on. But Tristan enslaves the star with a magic chain to take her to that pretty girl back home, and she goes along because also he says he has this magic candle… well, it’s a long story.

Point is, they’re chained together travelling, so it’s kinda like that movie THE DEFIANT ONES, or FLED. Only they fall in love, so it’s more like THE CHASE with Charlie Sheen and Kristy Swanson. Or PATTY HEARST? Maybe not. But maybe THE SURE THING. It’s a romance.

There’s alot of imaginative ideas about how this world works, and alot of funny concepts. The witch needs two goats to pull her cart, so she finds a guy with a goat and turns him into a goat and takes both of them. Later she needs two people to pretend to be her daughter and her husband, so she turns the goats into people – but the fake husband who was a goat and was never a person doesn’t know how to act like a human so he makes weird faces and jumps on top of tables and turns doorknobs with his mouth. But nobody says anything. In a climactic duel the witch uses a clay doll to voodoo a guy, and after that works she cleverly uses the doll to move his corpse around and make it sword fight Tristan.

There’s a gimmick where as each of the princes die they join their brothers in a growing entourage of ghosts watching the proceedings. They’re glowing cartoony guys that look like they’re about to try to hitch a ride on your doom buggy. I like how they’ll be human characters in the movie desperately trying to become king, then all the sudden they die, so they re-materialize as ghosts for the first time, they realize they’re dead and look disappointed, but immediately accept defeat and watch to see what their surviving brothers will do. They’re pretty good sports about it, is my point. You’d think they’d get all pissy.

The story also sort of  gently questions the values of these sort of romantic tales when (SPOILER) he pretty much succeeds in his quest to bring the girl a star and then realizes that if she’s impressed by that she must be a fuckin idiot. Then he falls for somebody he actually knows instead of just stares at. It’s an obvious but sweet message.

There’s a pretty big cast of familiar faces. Or maybe not that familiar because for example I didn’t notice Rupert Everett as one of the prince/ghosts, or Henry Superman Cavill as the douchey fiancee of the girl Tristan is trying to steal. But also there’s Peter O’Toole as the dying king, and Jason Flemyng as one of the princes, and Robert DeNiro as a (SPOILER – closeted) pirate leader on a flying ship who teaches Tristan to swordfight and also gives him a makeover. Ricky Gervais has a pretty funny scene as an asshole that DeNiro tries to sell lightning bolts to. The movie recognizes that he’s annoying so he quickly gets cursed to only talk in animal noises.

Oh, that’s weird, I just noticed that Gervais got his name on the poster. It’s pretty much a cameo.

My favorite performance in the movie is Pfeiffer as the lead villain. Although the movie heavily features a surprising amount of DDE (dodgy digital effects), the actual makeup effects are extremely well done, and Pfeiffer is constantly evolving/devolving from hot middle-age Pfeiffer to hideous hag, because any use of magic causes her to lose her fake beauty. She probly hadn’t played such a colorful character since BATMAN RETURNS, so she gets really into it. She also has a great moment where she breaks down and cries about the pointlessness of this whole fight just to look young. Okay, so she doesn’t mean it, but she makes it seem like she does. It made me miss Michelle Pfeiffer, when she used to sometimes be in the type of movies I would watch.

One small criticism: while it’s not an ugly movie by any means it’s easy to imagine Tim Burton, Gore Verbninski or alot of other dudes making it look gorgeous, which seems like a fair expectation for a fantasy movie. I guess Vaughn’s movies always look a little dull, and with a low standard for digital effects (although not anywhere near Stephen Sommers levels). Despite this, I think the overall enjoyableness of STARDUST raises my opinion of him a little. It’s definitely too cutesy for some of you fellas, but in my opinion it’s a good version of this sort of shit. Not bad.

Charlie Cox Claire Danes Henry Cavill Mark Strong Matthew Vaughn Michelle Pfeiffer Neil Gaiman Peter O'Toole Ricky Gervais Robert DeNiro Sienna Miller
This entry was posted on Wednesday, September 4th, 2013 at 2:09 am and is filed under Fantasy/Swords, Reviews. You can follow any responses to this entry through the RSS 2.0 feed. You can skip to the end and leave a response. Pinging is currently not allowed.