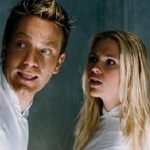 Of course I’m coming to it eight years and three TRANSFORMERSes later having heard of its growing reputation as Michael Bay’s Not As Bad Movie. So when I was looking for a dumb summer blockbuster to get me in a summer movie mood it leapt off the video store shelf into my cold, reluctant embrace.

Ewan McGregor plays Lincoln Six Echo, a man in a dystopian future where contamination has forced society underground. They wear all white (with Pumas – should’ve been Nikes like the Heaven’s Gate cult) and live a heavily-controlled existence, sort of a health-conscious THX-1138. When Lincoln wakes up in the morning a screen tells him he slept poorly, makes him an appointment about it, detects too much sodium in his piss. He goes to do weird futuristic manual labor all day but also has a second job or hobby holographically fighting Scarlett Johansson in a public gaming arena sponsored by Xbox. I wonder, did Xbox really feel it was necessary to put a big logo in front of these people? Because they literally have no money.

There’s one hope in this world and that’s “the island,” the last uncontaminated part of the earth. Every I-don’t-know-how-often there’s a lottery and someone gets to go live there instead of this underground lab bullshit. The others dream about it every day, the carrot on the stick. (I guess the lottery is a metaphor for, you know, the lottery.) 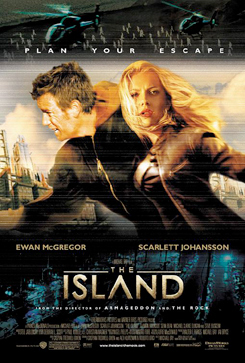 But you just can’t help get the feeling that something’s rotten in Denmark, or as young Obi Wan would say, “I have a baaaaad feeling about this,” or as TRAINSPOTTING would say, “there’s a baby on the ceiling… choose life.” Lincoln has illegally made friends with Steve Buscemi, a worker at the lab, he wears a plain old mechanic’s jumpsuit, not a cool track jacket like the security guys, so he has some of that salt of the earth wisdom, you know, he knows certain things about life, he has a special insight that–

Ah, fuck it, they’re clones. Spoiler. The world is not contaminated, these people are just told that because they’re grown in a lab to harvest replacement organs for the super rich. Lincoln is grown for a famous Scottish-American race car driver or something, Jordan for a model, Michael Clarke Duncan (only in two scenes I believe) for an NFL star. There is no island, it’s the same as that big farm out in the country where your dog moved to when you were little. Not exactly a mindblower, but I like that it’s not a traditional dystopia, just an illegal operation within a more normal near future. Luckily Lincoln discovers the truth right after Jordan wins the lottery, and they bust out right on time. (Freedom in this movie is represented by characters standing out on a hill photographed by a helicopter circling around them repeatedly.)

As they make it to the city – futuristic enough to have hover-motorcycles, trains and monorails, but not full-on BLADE RUNNER – we learn just how sheltered they’ve been. When they see a snake they don’t know what it is, same thing for a car. We hear that all their cartoons and TV shows have been designed to control their aggression or something, so they do have media, but it somehow never shows a car or a snake I guess. Weird.

They go to find working man Buscemi at his pad, and then track down their “clients” and hope to find a way to reveal their existence to the world and blow the lid off the whole operation. The company’s CEO Sean Bean, who would prefer to keep the lid tightly sealed, sends a team of mercenaries led by Djimon Hounsou to get them. Luckily those flying motorcycles are pretty easy to figure out with one try even if you are a weird manchild clone who just saw his first ever car like half an hour ago. So there are high speed chases with massive destruction until eventually Lincoln goes back to the clone factory to try to free everybody. The Great Emancipator.

It’s a nice looking movie with most of the action taking place outside in the sun, which I like. The futuristic-but-not-space-age vehicles are pretty cool, and the action is good by Bay standards. Kinda chaotic but the editing is more reasonable than usual, I could tell what was going on, I think.

And I like that Hounsou gets to change sides at the end. There’s no dimension to him but he’s the most compelling character to me so it’s satisfying for his looks of questioning throughout the movie to have some pay off.

It’s true that Bay keeps his Bayness at bay a little more than usual, but you can’t keep a clone underground and you can’t have Michael Bay make a 100% tasteful movie. As always he veers off into tonally jarring, painfully unfunny comedy bits, including a few of his standards: sassy black lady (Yvette Nicole Brown, later of Community), jive talking black witness of crazy destruction scene, and of course the one where a guy sees two guys doing something that he misunderstands as gay and then he’s uncomfortable and they get all embarrassed because they probly hate gays and would never be gay like a gay.

There are also several weird injections of misogyny: the male clones complaining about women getting to go to the island just to give birth, Buscemi shutting his wife up by saying “Remember that little talk we had about talking?” and later telling Lincoln never to give a credit card to a woman. You can’t tell me Bay didn’t add that last one. Not because it’s sexist, because it’s a hack joke for a shitty ’80s comedian.

To show that the clones are like children they have them “messing with the new guy” by flicking the back of his ears. Stupid new guy. Of the many problems here I think it’s this “adult children” concept that’s the biggest problem for the movie. You can recognize that they’re victims and feel bad for them but they’re by design so dumb and personality-less that you can’t really care about them or think they’re cool. Johansson comes out looking especially bad, because at least McGregor’s character is figuring shit out. She just has to look surprised and confused alot.

And then it really stretches the movie’s credibility. He doesn’t even know what a car is but figures out how to drive it. Just doesn’t know about traffic lights. Ha ha. (Also, his dad or whatever you call the original McGregor he’s cloned from lets him drive his car even though he has arranged for the mercenaries to come get them. Whoops. Car chase. Should’ve thought of that.)

Lincoln can’t talk to anybody without taking everything they say literally (“He’s in the can.” “He’s in a can?” “Yeah, taking a dump.” “Where is he taking it to?”) and yet when the plot requires it he has no trouble at all just taking over the guy’s life, acting cool and wearing sunglasses and fooling everybody. And aside from believability issues I just think it would be more interesting if he did a bad job but got away with it because who would assume a rich guy acting weird meant he was replaced by a clone?

By the way, if you ever think a rich guy is acting weird just hand him a snake. That’s the way to test it.

Seeing McGregor in this made me realize that we don’t see him in movies all that much. But I guess him being in this movie in the first place is probly why. I used to think of him as the guy from TRAINSPOTTING and all those movies he was doing back then. I see him now and I think he’s Obi Wan Kenobi – another life claimed by the star wars. He does what he can with this role, but I think it was a mistake to cast him, because it ignores that reality that this is a Nicolas Cage movie. It’s slick and has a hint of intelligent ideas but is mostly brain dead and it would be funny to see how Cage would play the childlike-guy-who-doesn’t-know-what-a-snake-is angle. He would’ve gone to town with that.

clones Djimon Hounsou Ewan McGregor Michael Bay Michael Clarke Duncan Scarlett Johansson Steve Buscemi
This entry was posted on Monday, May 27th, 2013 at 12:13 pm and is filed under Action, Reviews, Science Fiction and Space Shit. You can follow any responses to this entry through the RSS 2.0 feed. You can skip to the end and leave a response. Pinging is currently not allowed.