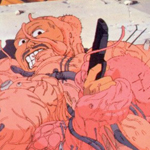 Anyway, it’s the only fun a young man has these days and the cops even interfere with that. Ruin everything. 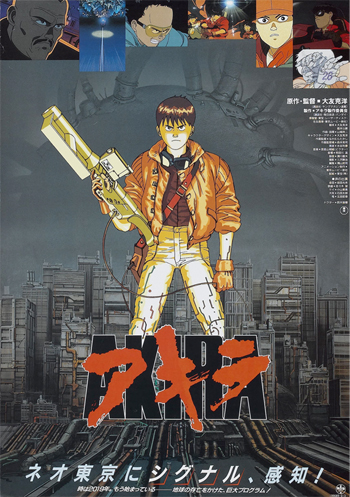 The boys are about to get involved in some weird shit. There’s some sinister business going on nearby. A burly guy named Ryu and a teenage girl are on the run with a little boy whose face is wrinkled like an old man. Riot cops are chasing them with dogs. This happens in the middle of a traffic jam. Ryu has to shoot the dogs right in front of people. He’s part of an underground group trying to liberate these kids from government experiments. When Kaneda and friends get swept up as suspects in a bombing, Tetsuo ends up in the program himself, undergoing treatments that unleash astonishing brain powers.

Kaneda’s real young but he’s our badass hero. Kind of a futuristic James Dean who color-coordinates his leather jacket with his motorcycle (both bright red). His bike has corporate logos on it, including Canon for some reason. I don’t know if those were on there when he stole it or if even the rebellious gangsters of the future worship the gods of capital. Or have sponsors.

Whatever the deal is with that, Kaneda teams up with the rebels, hoping they can find his old friend. Meanwhile Tetsuo sits confused in his hospital bed, suffering from crazy hallucinations and psychic messages from more of the creepy old-faced kids, one of whom looks exactly like Louie Anderson. I believe this was originally made as a spin-off of the cartoon Life With Louie.

As a side note, it’s weird that one of the things comedians used to do when they were really successful was have a cartoon show about themselves as kids. I believe Roseanne Barr also had one, and Damon Wayans, and Bill Cosby, and John Candy if that counts. The comedy landscape is pretty different now but I wouldn’t rule out Life With Louis C.K.

AKIRA has alot of action, including but not limited to a chase on a GI JOE-esque flying snowmobile type vehicle Kaneda hijacks in a sewer tunnel. We always figured there were mutant alligators down there but we didn’t know about the cool vehicles.

The movie slowly reveals bits of this history, that Old Tokyo was blown up by this psychic kid named Akira, now worshipped by the cult and the basis of this scientific study that Tetsuo is mixed up in. What nobody seems to understand yet is that Tetsuo is powerful too, and growing, maybe to be more powerful than Akira ever was. Which would be bad. I mean maybe he could use the powers to clean up the city, pimp out motorcycles and protect dogs from being shot, but he doesn’t really have that kind of personality. He’s an immature little punk with an inferiority complex because he was picked on as a kid and even resents the kid who protected him (Kaneda). They have that childhood bond but Kaneda doesn’t mind putting Tetsuo in his place, and Tetsuo’s not gonna accept the putting now that he has super powers that make Carrie White seem like, you know, an ordinary non-raging-telekinetic-powered person. So when he gets out, which he does immediately, everybody’s in fuckin trouble.

I guess this must be the inspiration for that movie CHRONICLE, where a bitter little asshole kid gets powers and instead of using it to blow girls skirts up or even ruin the prom he goes out into town to just stand there and create a whirlwind of destruction, basically whipping his psychic dick out and slapping everybody in the face with it repeatedly. Doing helicopters with it. By this point the military have pushed aside the dumb politicians behind these experiments, maybe the most positive portrayal of a military coup I’ve seen on film. (I’m not familiar enough with the Louie cartoon to know if that’s a theme they explore alot.)

So it’s Tetsuo facing off against bombs and satellites, plus the psychic old people kids, plus his best friend Kaneda has the balls to go right up to him and call him out on being a dick. The animation here is especially great. He gets an arm blown off and telekinetically weaves garbage into veins and muscle tissue to create a new one. He gets out of control and starts pulsating and throbbing, inflating into a giant, vaguely baby-shaped pile of mutated organs, growing around his friends, suffocating them. Don’t do that, kids.

From what I understand this is one of the landmarks of the Japanese anime animation cartoons which is not just for kids anymore, etc. Makes sense ’cause I’ve never seen anything like it. The story is very dense and I don’t really understand alot of it, but the filmatists make up for it with a fully realized dystopian world, hyper-detailed animation, chaotic atmosphere and highly imaginative psychedelic imagery. Worth watching even for those of us who will never wear a cape or carry an oversized sword into a convention center.

UPDATE: I have some love for the people in capes with the oversized swords doing their thing. I shouldn’t have ended on that note, ’cause it sounds negative. I just mean I’m not an anime guy and I thought it was worth watching, so you might too.

anime dystopian futures motorcycles telekinesis
This entry was posted on Wednesday, May 15th, 2013 at 9:30 pm and is filed under Cartoons and Shit, Reviews, Science Fiction and Space Shit. You can follow any responses to this entry through the RSS 2.0 feed. You can skip to the end and leave a response. Pinging is currently not allowed.