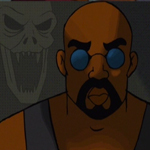 But it does have Treach and some of the other actors from the movie, making it seem much more legit. And it’s written by Ramsey and Kantz, so it has the same type of dialogue as the movie. In fact, the same dialogue in many cases! For some reason this is not a prequel or an additional Malik Bishop adventure, like what happens when he runs off with Mylene at the end. No, this is an abbreviated version of the same basic story told in a different, cheaper looking medium, with some of the same scenes, conversations and narration (re-recorded, I believe).

Once again we see Malik in the apartment staking out Cynda through his rifle scope, waiting for word from his boss to kill her. He’s still wearing the bird trinket on the bracelet and recalling his beginnings with Frenchy Davis, being recruited by Damien Wiles, training with Duke, the death of his father, meeting Cynda, and the night when he’s supposed to “fulfill the contract,” but she leaves the apartment, he follows and she confronts him and etc. 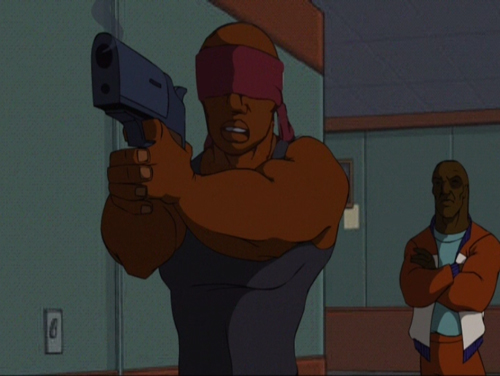 Everything about Hylene is left out except there’s a scene where he sees her for the first time at the burger joint. They don’t speak, but there’s a new thing where he’s impressed by her being an entitled jerk giving an overly complicated order (see also PHANTOM THREAD). 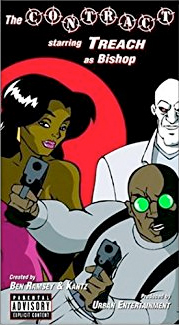 In cartoon form Cynda has the voice but not the strong presence of Kent Masters-King. They draw her as a sex kitten who Malik watches walking in front of the window nude, silhouetted in the shower, or laying on the floor in her underwear with her butt in the air. In an interview included on the DVD Masters-King laughs about them giving her big boobs.

We also see more about Malik’s dad and his murder-suicide. He was some kind of government contractor guy (like Hylene) and before killing himself he warned Malik about a “demon” cursing the family. This is Malik’s instinct to kill, visually represented by flashes of a skull or a demonic white man who looks like the guy that killed Cynda’s mom. 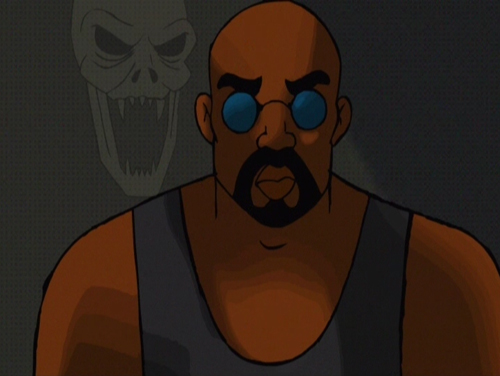 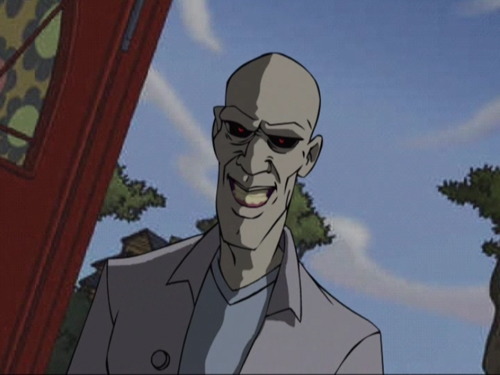 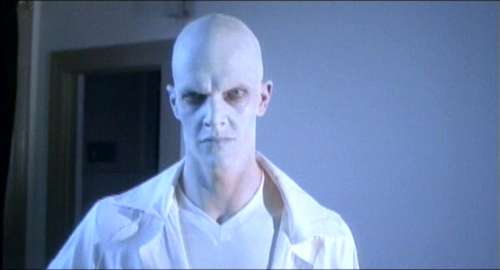 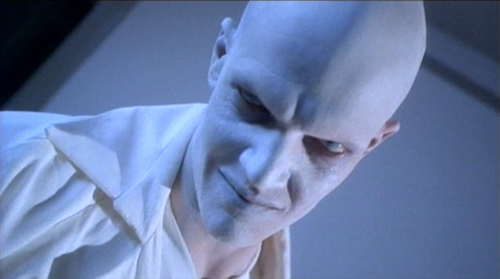 We learn from the interviews on the DVD that this character was cut out of LOVE AND A BULLET but was played by Derek Mears (Jason in the FRIDAY THE 13TH remake). I noticed him in the credits and thought I missed him. I guess this is kinda like Michael Berryman’s “Skull Cowboy” character cut out of THE CROW. In his interview, Mears describes his character “The Milkman” as “pretty much the white devil” and “Treach’s karma.”

One alternate scene has the boys discussing Jar Jar Binks, arguing about whether he’s a “cybertom” or a “sensitive type amphibian.” Cisco claims George Lucas designed him as a composite of Dave Chappelle, Antonio Fargas, J.J. Walker and a Madagascar sap lizard. At the time, Chappelle’s biggest roles had been in HALF BAKED and UNDERCOVER BROTHER.

In this telling, the surprise that he shoots Cynda is the end of the movie. In a way it’s more dramatic though, because her gesture of opening her robe to offer herself up to be shut mirrors something new we learned in a childhood flashback – that his mother did the same thing before his father shot her.

Watching this I assumed it was a rough draft of the movie, a web-animation used as proof of concept to get funding or something. But according to the interview with the producers it was made after the movie. The title was the original title of the script, before they came up with a better idea.

THE CONTRACT is for LOVE AND A BULLET or Ben Ramsey completists only, but that’s me I guess. Now I know the full story, I can be like one of those guys who knows Star Wars shit that’s only in the books.

THE CONTRACT is not the only direct-to-video/internet animated tie-in to a live action movie, but it’s the earliest one I know of. Other examples include:

THE ANIMATRIX (2003) -101 minute compilation of nine shorts from different directors set in the world of the Matrix films. Very artful and adds to the movies; the CITIZEN KANE of this format.
CHARLIE’S ANGELS: ANIMATED ADVENTURES (2003) – I never heard of this until C.J. mentioned it in the comments, but it seems to be shorts released on the web to promote CHARLIE’S ANGELS: FULL THROTTLE.

CHRONICLES OF RIDDICK: DARK FURY (2004) – 35 minute short connecting PITCH BLACK to CHRONICLES OF RIDDICK. Directed by Peter Chung, who created AEON FLUX and directed the best short in THE ANIMATRIX.
VAN HELSING: THE LONDON ASSIGNMENT (2004) – 33 minute prequel to VAN HELSING
KANGAROO JACK: G’DAY U.S.A.! (2004) – 77 minute animated sequel
BATMAN: GOTHAM KNIGHT (2008) – The Batman version of THE ANIMATRIX, this is 76 minutes long and made up of six shorts that take place between BATMAN BEGINS and THE DARK KNIGHT. Very high class, though it does not have the voices of the actors from the Nolan movies, as originally intended.

All of these have better (or much, much, much better) production values than THE CONTRACT, but also they’re coming from big studios with money to throw around.

Ben Ramsey Kantz Treach Zero External Reviews on IMDb
This entry was posted on Wednesday, March 21st, 2018 at 10:32 am and is filed under Cartoons and Shit, Reviews. You can follow any responses to this entry through the RSS 2.0 feed. You can skip to the end and leave a response. Pinging is currently not allowed.

11 Responses to “The Contract”