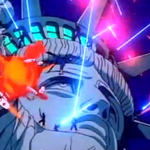 But since them I’ve talked to other dudes who never knew of the comics but have a nostalgic attachment to the toys and cartoons they grew up on, even if they know they’re dumb. And these cartoon-faction Joeists insisted I watch GI JOE: THE MOVIE, a 90 minute cartoon extravaganza intended for theatrical release IN 1987 but then it went DTV because, let’s face it, it was more of a TV cartoon than a motion picture. A reverse TOY STORY 2. It’s really something though.

By far the highlight of the movie (and only part where it doesn’t look like TV animation) is the opening, which is like a big Broadway number where the masked terrorists known as Cobra are trying to blow up the Statue of Liberty and the United States Armed Forces elite unit G.I. Joe are trying to stop them. The cartoon-camera zips around covering parts of this huge battle of jet packs, flying bubble cars, grappling hooks, people flying, falling, grabbing on, climbing, punching, shooting lasers and missiles… and it ends with our Real American Heroes holding a flag and posing on top of Lady Liberty’s crown. Planting a symbol of America onto a symbol of America. It’s like a pizza wrapped in a taco. But more meaningful.

Ah shit, there is no way to do that scene justice, you just gotta watch it.

IMPORTANT HEALTH WARNING: I KEEP GETTING THIS SONG STUCK IN MY HEAD DAYS AFTER HEARING IT.

Alot of people pointed out last summer that both THE DARK KNIGHT RISES and THE AVENGERS had villains using a revolutionary green energy device for evil. Some saw it as a backlash against or superstitious fear of modern environmentalism. But actually it’s just an homage to GI JOE: THE MOVIE. “The Joes,” as they call themselves, casually test out the Broadcast Energy Transmitter (or B.E.T.). “We’ll see if we wasted a billion dollars of tax payer money,” says Lady Jaye or somebody just before Duke or somebody pushes a button on a machine that could be towed by a station wagon but “could be the end of the world’s energy crisis.” It works! The world is saved! 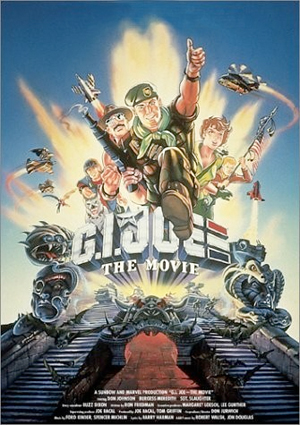 Except… Cobra’s leader Serpentor (a guy in a yellow snake costume – Cobra Commander is now demoted and despised by every last one of his co-workers [but they still call him Cobra Commander so that must be his Christian name and not intended to indicate rank]) wants to steal the B.E.T. for a weird alien looking lady who broke into their base. See, it turns out there has always been this magical land nearby called Cobra-La where an ancient race of snake people and angels and shit live and are waiting for their chance to destroy the human race using plant and bug based technology. Like the Unabomer they hate us for our non-organic tech, they want to use spores to kill us, but they sure don’t mind using our billion dollar tax payer funded machine that their entire plan 100% hinges on. Fuckin fork tongued hypocrites. Go fuck yourselves, snake men.

At first I thought it was a weird coincidence that the bad guys are snake-themed and they happen to meet these monsters who have snake-shaped shit also, but then they reveal that Cobra Commander is not and never was Duke’s friend Joseph Gordon-Levitt like in the movie, actually he was a snake man scientist who they poisoned and put a mask on and sent out in the world to pretend to be human and use human technology and attack the world and never mention anything about an ancient race of snake people but secretly he’s preparing for their plant-based attack. He was the chosen one but now they’re disappointed in him and put him on trial for “the one unforgivable trial: failure.”

Interestingly, the trial is intercut with the court martial of one of the Joes, Lieutenant Falcon, played by Don Johnson (no shit, the real Don Johnson). His crime was that he’s a fucking moron. They captured Serpentor in battle, so basically they have Osama bin Laden locked up. Falcon’s supposed to be guarding the cell, and he brings in some girl he met to show off. (It is, of course, Zartan’s sister in disguise.) then, like 5 minutes after he gets dressed down for that, he abandons his post to hit on another girl, Jinx. When Jinx tells him to go back to his post he arrogantly describes all of the levels of security that bad guys would have to get through in order to free Serpentor, while onscreen we see the bad guys going through each of the levels of security in order to free Serpentor. All because Don Johnson can’t keep his dick in his pants.

Lucky for Mr. Falcon there is a weird approach to law in GI Joe where Duke’s explanation that “yeah, he’s pretty much the biggest failure in the history of American military, or any military really, but secretly he was only allowed on GI Joe because he’s my half brother and I feel sorry for him being so bad at everything and a danger to the whole world because of the idiotic thing that he just did” is a strong enough argument to get him a second chance. He can stay on the force but first he has to go out to the desert to re-train with WWF Superstar Sgt. Slaughter (voiced by WWF Superstar Sgt. Slaughter).

So the difference between human and snake culture is that our most idiotic fuckups are rewarded by getting to hang out with famous wrestlers, theirs are punished by being devolved back into snakes. But their side, if you count Cobra and not just the ancient ones, is full of weak-willed boobs. Even Cobra’s megalomaniacal emperor guy, Serpentor, immediately falls into line when some other monstery guy declares himself the leader. And the entire team, all humans, immediately agree to the Cobra-La master plan of using spores to kill all humans. I mean, even if they survive (some of them think they can hide in a cave) how good a life are they gonna have? Do they really want to start using giant bugs instead of their cool aircraft? It seems like it would be a pretty big adjustment.

By the way, they got Burgess Meredith to do the voice of bad guy Globulus.

In some ways this script seems to be modeled after the POLICE ACADEMY sequels. In addition to Sgt. Slaughter’s training camp there is another subplot about another training camp where another group of gimmicky inept people also go into training. “Funny” things happen like a guy who somehow secretly brought his dog with him has the dog do a bomb-finding exercise, and then the dog keeps bringing the bomb back. It seems to me like it would be unsafe to tell a completely untrained stranger to go find an actual bomb that is actually gonna explode and also to not tell him that it is an actual bomb that is actually gonna explode. But then I’m not part of an elite fighting force so maybe it’s just over my head.

Anyway, just like in a POLICE ACADEMY, these people all have no training and pretty much fail everything they are tested on and then are sent to do an important mission anyway. Luckily Jinx can do ninjitsu if they let her put a blindfold on.

Then some other shit happens and giant bugs like in NAUSICCA. This movie made me understand better how much more fun the live action GI JOE pictures could be, but also made me appreciate that their stories at least aren’t as dumb and unstructured as this bullshit. But it’s a shame that the battles in the movies aren’t anywhere near as crazy as that Statue of Liberty opening. Some things missing even in the Stephen Sommers movie: flying bubble cars, evil twins, bikers with Road Warrior cars, a guy getting his cape stuck in the fan of his flying sled, a blond guy who wears a Hawaiian shirt into battle, Sgt. Slaughter beating the shit out of an angel named Nemesis Enforcer. (Before each wrestling move he says who it’s for, like “This is for Duke!”, and when he said “This is for Falcon!” I thought he said “This is for fashion!” Making fun of the way the guy dresses. Would’ve been funny.)

It’s funny to hear them all talking about B.E.T. all the time. Why are they all fighting over B.E.T.? It’s important to note that in GI JOE all black people are athletes. One of the most prominent characters is Roadblock (played by The Rock in the movie), whose dialogue is entirely in rhymes in a fake Muhammad Ali voice. I think the only other brother on the team is a new recruit called Big Lob, who wears a basketball jersey and narrates all of his combat in the point of view of a sports broadcaster. Even in the GI JOE cartoon PSAs included as an extra on the blu-ray there’s only one black kid, and he’s spinning a basketball and talking about being in the NBA. The white kids just get to talk about eating healthy.

There’s a funny bit at the end where Duke dies heroically, taking a snake for Falcon. (Yes, he jumps in front of a magic snake that Serpentor wears around his neck but it turns stiff when he throws it like a spear.) As he dies he whispers their catch phrase, “Yo joooooooeeeeee.” And the general says it to himself too, tears streaming down his face. Good shit.

But apparently they sissied out and decided they couldn’t kill him off, so there are off screen voices that tell us “he’s slipping into a coma” and later “Good news, Doc says Duke is gonna be a-okay!” Moments later Falcon is looking up at the heavens, marveling at the miracle of the world being saved, and whispers “Thanks, big brother.” I guess maybe he didn’t hear what they were talking about when they said he wasn’t dead.

Director Don Jurwich is of course a guy that worked on a million TV cartoons, but this was not his first time directing animation for the big screen. This was his first time:

Writer Ron Friedman was a veteran TV writer for Fantasy Island and Gilligan’s Island as well as most of the non-island TV shows they had also. And he did TRANSFORMERS THE MOVIE, so he was the go-to guy I guess for enjoyably brain damaged movies made to sell cartoons made to sell toys.

Burgess Meredith Don Johnson DTV Hasbro Peter Cullen
This entry was posted on Sunday, April 14th, 2013 at 10:34 pm and is filed under Cartoons and Shit, Reviews. You can follow any responses to this entry through the RSS 2.0 feed. You can skip to the end and leave a response. Pinging is currently not allowed.