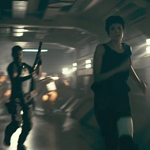 You could say the same about TAKEN, ’cause it’s a post-action mess made palatable by Liam Neeson getting to play a black ops hardass with a straightforward, personal goal. Like TAKEN, this has Maggie Grace playing an abducted daughter who has to be rescued (this time the president’s daughter taken hostage on a low orbit maximum security prison/space station). But it’s not the SPACE-TAKEN I was expecting, because the tone is completely different. The biggest surprise and the best part of the movie is that Guy Pearce as Snow, who has to rescue her, is a total smartass. He speaks mostly in quip, and successfully so, always keeping the movie fun instead of being annoying like could sometimes happen. The movie around him takes itself seriously, but he refuses to follow its lead.

I felt good about this one starting with the opening scene of Pearce, in closeup, giving wiseass answers during a police interrogation. Each non-answer is punished with a punch to the face, his head bumping off screen revealing a credit, then covering it back up when he re-enters the frame. Feature film rookie co-directors James Mather and Stephen St. Leger come up with a couple of these great visual gimmicks: a row of gunmen perfectly lined up to be hidden behind Snow’s head until the camera pans, an illusion caused by an inconveniently located mirror, a guy who opens his mouth and you can see through the back of his head ’cause he just got shot.

I read that this was a heavy green screen movie, but I didn’t notice except in the weird CGI motorcycle chase at the beginning, which looks artificial to the point of this-has-got-to-be-intentional stylization. The space ship effects, on the other hand, look good to me, and if they weren’t using practical sets I sure didn’t realize it. 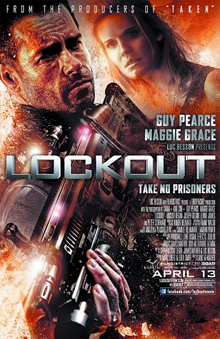 The story is a good mix of simple and convoluted. There’s a bit of cloak and dagger shit (double crosses, secret messages, guys fighting over a briefcase) that starts in New York City, 2097, and continues into space and back. Snow, set up and in the custody of the Secret Service (headed by the always creepy Peter Stormare), facing 30 years in stasis, repeatedly refuses the option to free himself by accepting the mission to rescue the president’s daughter from the unfrozen psychos who have hijacked MS1. But when he finds out one of his associates in the briefcase affair is in the prison he says he was only kidding. So he’s gotta rescue the girl but really he wants to find a guy.

Some of the action filmatism is a little chaotic for my tastes, but it is discernible and full of great gags and ideas. The opening scuffle and chase has several clever moves (pulling a hotel bed sheet to bounce a gun into his hand) and a Wile E. Coyote-esque fall. Snow is a trained badass who in one scene does a parkour like climb and jump, but he’s fallible, so he takes a couple humorous tumbles. And he’s not sure what to make of the giant space motor thing that affects gravity in such a way that he floats over it and has to fight an attacker while flying. It could be a reference to the Fizzy Lifting Drinks in WILLY WONKA, but no burping.

In a way LOCKOUT kind of reminds me of P.W.S. Anderson’s DEATH RACE, another disreputable science fictional piece I heard terrible, terrible things about but ended up admiring for its solid b-movie structure supporting a high volume of lowbrow thrills. But that one built its Frankenstein character around the Jason Statham persona. The biggest joy of LOCKOUT is this specific character of Snow and the way Pearce plays him, completely different from the generally milquetoast and forgettable characters he often plays. Honestly the story could be anything as long as it had this Snow guy stuck in it, and not happy about it. I also like the daughter, who somehow forgives him after he forcibly cuts her hair, dyes it with motor oil and toilet water, and punches her in the face. No time to explain to her that it’s a disguise, and for some reason the bloody nose is supposed to help her pass for a male prisoner. (Seems questionable.)

No, Snow doesn’t have any interest in playing the knight in shining armor. His first-daughter-treatment-protocol seems to come from Val Kilmer’s in SPARTAN. Their bickering threatens to get old fast, but it’s a tight 95 minute movie so it’s not long before it gets to a turning point where each of their actions prove their selflessness, and from that moment on you can tell they respect each other. They still take jabs but now it seems flirtatious instead of bitter.

Part of their disagreement is political. Snow is supposed to be some kind of right winger, and two of my favorite lines are teasing her about being a Democrat. He just says that ’cause her dad is a Democrat, but she represents liberalism by coming to this prison to investigate human rights abuses and her (correct) belief that the prison is cover for human experimentation of the effects of space living.

Maybe she’s supposed to be naive – after all, she’s standing up for the rights of guys who go on to demonstrate that they really are the worst scum formerly on earth – but she does turn out to be correct. Snow’s friend does get his brain scrambled by their method of freezing, that’s something she’s trying to stop. And the heroic acts she performs are not about learning a lesson from Snow, or giving up her values. She already knew how to fire a gun. She disobeyed him to help save the hostages. Once he’s rescued her she then uses her wits to solve the mystery he failed to and save his ass. So I think it’s meant as more of a reaching across the aisle, Hands Across America, Tammy Faye and Ron Jeremy type of inspirational getting along type of a story.

The villains aren’t as memorable as the heroes, but they’re okay. There’s an in-charge guy (Vincent Regan) and an out-of-his-mind-rapist guy (Joseph Gilgun). He’s one of these skinny shirtless tattooed weirdos that moves like a monkey, which I think is becoming a familiar villain archetype. The one problem I had with him is his accent is so thick I had to keep turning the subtitles on. If I’d seen this in the theater I’d probly have understood less than 4 sentences out of that guy.

Man, I keep thinking the title is LOCKUP, but that’s wrong. I’m not sure why it’s LOCKOUT. There is a point where the guys at home base have their communications with Snow cut, and that’s referred to as a “lockout,” but that’s hardly important enough to be the title. If you’re just gonna name it after one little part then it might as well be called TOILET WATER HAIR or FIRST DAUGHTER FACE PUNCH. Or how bout STAR INCIDENT? Maybe that’s not specific enough.

Anyway, LOCKOUT can come in any time!

I don’t know man, I’m just trying to come up with a clever way to say it’s pretty good. Snow would have something funny to say about it.

Special thanks to Jareth, Majestyk, Larry and whoever else was talking this up in comments, inspiring me to catch up with it.

Guy Pearce Joseph Gilgun Luc Besson Maggie Grace Peter Stormare Vincent Regan
This entry was posted on Friday, November 23rd, 2012 at 12:42 pm and is filed under Action, Reviews, Science Fiction and Space Shit. You can follow any responses to this entry through the RSS 2.0 feed. You can skip to the end and leave a response. Pinging is currently not allowed.