THUNDER SOUL is kind of like that movie WHEEDLE’S GROOVE, another documentary about a now-mostly-forgotten regional funk phenomenon of the ’70s, recounting the glory days through photo montage and vintage clips, with interviews of the musicians now that they’re all grown up and square with regular jobs and families but can use their rediscovery by young white record geeks as an excuse to reunite and prove to themselves that they’re still kinda cool. In my opinion that was a long sentence.

But WHEEDLE’S was a scattered portrait of all the different bands in Seattle at the time, this is the story of one really unusual band in the small town of Kashmere Houston, Texas. They’re called the Kashmere Stage Band, as in the stage band for Kashmere High School, because that’s what they were. Music instructor Conrad O. Johnson, at that time in his mid ’50s, decided to try having his students play the funk music they loved instead of the traditional big band songs. They seemed to come alive when they played it, so he started writing originals for them and orchestrating songs like “Thank You” by Sly and the Family Stone and “Scorpio” by Dennis Coffey for horns. Then for years they won tropies at all the high school band competitions and performed in Europe and Japan.

I knew their song “Kashmere” from some compilation, but I honestly never heard about them until this movie played film festivals. You might’ve heard them when NPR did a story (it inspired the movie). Now Again Records sort of re-discovered them and put together a great 2-CD compilation called Texas Thunder Soul that has both live and studio recordings. The music is great, genuinely funky but with the novelty of a big band sized horn section. Seriously – I count 19 saxophone players credited. You’d never guess they were high school kids, not even from the photos. 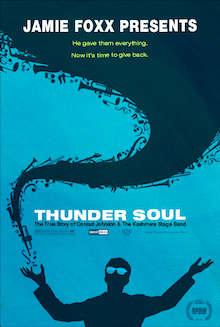 The movie is partly a celebration of ’70s black style – afros, dancing, cool hats. It’s also a little bit of an underdog story. They’re poor kids from the 5th Ward (I think that’s where the Geto Boys are from), most of them don’t have fathers, they’re competing mostly against all-white bands, sometimes in very racist parts of the country. I’m sure that will be emphasized if this director ever gets his planned narrative version of this story off the ground. I honestly think that could be great. Usually I’m against it but this documentary is more telling and less showing. I really want to see scenes like the first time Prof (as everybody, including his son, calls him) gets his students excited by playing “Super Bad” or something.

The documentary’s weakness is that it never gets beneath the surface. More than one grown up student claims that “Prof taught me how to be a man,” but no real examples are given. They talk about how Craig Baldwin (not the experimental filmmaker) was “practically a felon” and was a “thug,” but they don’t give any details at all, leaving me wondering if the claim of this band turning his life around is a little exaggerated. Even the process of teaching the kids is pretty much glossed over. It’s just – they played funk, he was strict and wouldn’t let them chew gum, now they’re incredible.

All that could be improved in the LEAN ON ME Hollywood bullshit version, but one thing that could never be matched is the genuine attachment Baldwin has for Prof. He puts together this reunion performance and at this point Prof is in his ’90s and his health is clearly deteriorating. Baldwin obviously looks at it like his dad is dying – his own dad wasn’t in his life, and he claims “brothership” with Prof’s son. I’m not clear if he really had an ongoing relationship with Prof or if he’s just getting nostalgic for how important this man was to him growing up. But the part of the movie that really got me was seeing how important it was for Baldwin to put this performance together for Prof, and then to see him seeing the lazy smile on the old man’s face.

funk music documentaries
This entry was posted on Monday, March 19th, 2012 at 2:15 am and is filed under Documentary, Music, Reviews. You can follow any responses to this entry through the RSS 2.0 feed. You can skip to the end and leave a response. Pinging is currently not allowed.