BOUNTY HUNTERS is a low-rent but likable b-or-maybe-c-movie that is the movie debut of Trish Stratus. I didn’t know who that was to be honest, but she was the 7-time Women’s WWE Champion, which it turns out is a thing they have. Stratus plays a bail enforcement agent named Jules who, along with her boss/special friend Ridley (Frank J. Zupancic) and wiseass partner Chase (Boomer Philips) get into some trouble when they make an unethical choice while picking up a bail jumper.

See, it should be a routine arrest, but the guy starts mouthing off about how he knows the massage parlor where a mobster with a $100,000 bounty on him is currently enjoying himself and if they let him go he’ll take them to it. They know it’s illegal but they’re hard up for money and Getting Too Old For This Shit so they do it. Oh well, trade a small timer for a big time killer, it’s not what you’re supposed to do but it doesn’t hurt anybody. Could do the opposite. 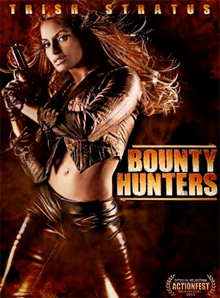 The trouble is then they face an even worse temptation. The massage parlor guy is basically a dead man, because his boss has to make sure he doesn’t give up any information. If our heroes deliver him to the police he’s gonna get shanked at best. The boss wants to make it easy so he offers $1 million to our bounty hunters just hand him over.

There are other threats along the way, and other bounties. Jules has to fight a big tattooed muscleman with a mohawk at a gym, so they basically have a wrestling match on some mats, and she also gets to swing around on the fitness equipment. She wakes up from being knocked out and has to fight a female martial artist disguised as a cop in the back of a moving ambulance. She also has a night job as a waitress at a strip club, so there’s a nice moment where a guy grabs her ass and she beats up 3 dudes with one fist while still balancing a tray of beers in the other hand. Chase has a good fight with the fake cop lady in a public restroom, a smaller one than they usually use for restroom fights. (As you know I am a connoisseur of restroom fight scenes.)

The fights have a little more of a staged, pro wrestling kind of feel to them than a cinematic one, but I like the energy and the style. Stratus is doing wrestling holds but also martial arts (I guess she studied the Israeli style Krav Maga for the movie). So there are way more hits and kicks than in WWE but also acrobatic grappling, scissoring a guy’s head, flipping over, being tossed around, people breaking through walls.

I also like the attempt at sort of a down-to-earth, colleagues-just-doing-their-job-together story. It’s a story about a bad night on the job, maybe the biggest thing that’s happened to them, but it’s still not monumental. There’s no saving the world or the city or even a hospital or community center or a hostage (except Jules). It’s a pretty small event leading to an intimate showdown.

I would appreciate though if they let Stratus do something a little cooler to save the day. They have her do what they refer to as “the finishing move,” but it’s pretty underwhelming. According to wikipedia her finishing moves in the WWE were the “Chick Kick” and the “Stratusfaction,” which I gotta say both sound better than Ducking Down So Somebody Else Can Shoot a Guy, which is the one she uses in the movie.

Stratus and Zupancic are both pretty stiff with their line readings, but I find them and their relationship easy to like. Philips is the standout actor in the movie. He’s a pretty big guy but it turns out he’s a Canadian comedian. Unlike most comic relief guys in these type of movies I thought he was pretty funny most of the time, making light of the situation more like somebody trying to get through the day than somebody trying to add the funny part at the end of the scene. Director Patrick McBrearty doesn’t seem like a future genius or anything but I respect that he’s going for a little different tone than most other DTV action of our current times.

I hope this isn’t mean to say, but I think I should mention that I don’t really like looking at Trish Stratus. She has an aggressively artificial look to her facial features that is obviously supposed to be sexy but is a real turn-off to me. Gina Carano in HAYWIRE is a good looking lady who becomes way sexier because of her physical abilities and confident presence. I feel like Stratus could’ve been that too, but it looks like there was a team of scientists trying to force it over the years and ruining the whole enterprise. She’s got a bunch of Playboy Magazines and all 11 seasons of Baywatch spliced into her DNA.

I don’t think that’s sexist to say because I would also complain if a male action hero looked like too much of a pretty boy or wore a ridiculous outfit or hairstyle or whatever. Some people are still mad at me for my controversial statements about Mel Gibson’s hair in LETHAL WEAPON. But film is a visual medium and imagery is a big part of action cinema and it’s important for the badasses to look cool.

So that’s a problem for me with Stratus, but I did still like her in this movie because it’s fun to watch her fight.

It’s too bad it has such a generic title. I kept thinking, while looking at the “BEA” stenciled on the back of their vests, that BAIL ENFORCEMENT AGENTS would be a better title. I forgot that it actually was called BAIL ENFORCERS when it played Actionfest last year. I don’t know why somebody thought that had to be changed. Were they really worried that their key demographic doesn’t know what a bail enforcer is? I don’t know if we should take that as an insult or a compliment.

Actionfest bounty hunters DTV Trish Stratus
This entry was posted on Tuesday, March 6th, 2012 at 1:42 pm and is filed under Action, Reviews. You can follow any responses to this entry through the RSS 2.0 feed. You can skip to the end and leave a response. Pinging is currently not allowed.