aka ELITE SQUAD: THE ENEMY WITHIN (title on American poster)
ELITE TROOP 2: NOW THE ENEMY IS ANOTHER ONE (bootleg-sounding literal translation)
ELITE SQUAD (title on marquee at the Uptown in Seattle)

ELITE SQUAD 2 (as the subtitle on the title screen says) is the 2010 follow-up to the 2007 Brazilian police epic. Same director (Jose Padilha), still writing along with Braulio Mantovani (CITY OF GOD). Wagner Moura returns as Nascimento, head of B.O.P.E., the paramilitary police unit that fights the drug gangs in the favelas of Rio. This is supposed to be quite a few years later, because the baby that was born in part 1 is now a sullen teenager. Luckily they don’t make Moura wear old man makeup or anything, they just ask you to go with it.

In part 1, you remember, Nascimento had to choose his replacement so he could retire. In the opening narration of part 2 he says “I chose a good man to replace me so I could spend more time with my family. That didn’t work out.” And like that, he’s back on the force. It’s almost like an ALIEN 3 situation, it instantly dismisses everything he worked so hard for in the last installment. But the bluntness makes it funny. It’s not only retiring that didn’t work out, it’s also spending time with his family. He’s divorced and his wife has remarried. 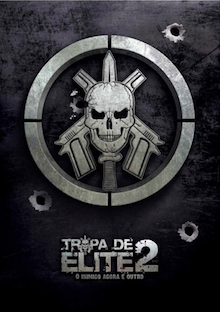 And wouldn’t you know it, the new husband is one of Nascimento’s most hated people, a liberal professor and human rights activist named Fraga (Irandhir Santos). Nascimento sounds bitter and disgusted as he describes Fraga as a total scumbag in the narration, and scenes of a tense prison riot are intercut with Fraga in a lecture hall speaking about the prison population of Brazil and the plight of the underpriveleged. I’m waiting for him to be the weasel that Nascimento describes, or a cluelessly naive hippie or something, or a hypocrite… but it turns out that’s not really who he is. And as disgusted as Nascimento is to see Fraga helicoptered in to negotiate with the hostage-takers at the prison, he seems to understand that this guy’s got balls to go in there without a vest and talk to the cartels. And in fact he says himself that Fraga has the situation under control. Everything that goes wrong is caused by his squad doing what he taught them to do (shoot everybody).

Alot of the elements are the same as part 1: it starts when a crazy shootout is about to begin, then skips back and tells the events leading up to that, it has constant narration from Nascimento, he and his guys cross many lines in their police work but also oppose the many dirty cops. But the content is alot different. While the first one was about dealing with the vicious drug gangs that control the favelas, this one moves ahead to a time when Nascimento and his further militarization of the police have successfully wiped out the drug trade. In place of the cartels now they get militias, basically former and current police officers running everything like the mafia.

Nascimento is kind of a Dirty Harry character. I’m not saying he has that kind of charisma, but he’s got that same thing where he is clearly going way over the line of what a cop should be allowed to do, but we root for him to pull it off because we believe that he’s trying to do the right thing. At the same time we are – or I guess I am, I can’t really speak for all of us – sort of horrified to be supporting this. This being Brazil he’s allowed to do shit that even Callahan would be offended by. Shit that would give the Patriot Act a boner. They just treat it like a war, they got snipers in helicopters flying around taking people out.

In fact he gets into a DARK KNIGHT situation where he ends up in charge of the agency that bugs everybody. The movie presents it like it’s not even a controversial issue, of course the government has bugs everywhere and spies on everything and everybody, and it’s a respectable job to listen in and try to bust people for shit. It’s matter-of-fact enough about all this that for a while I wasn’t sure if the movie was trying to tell me this was okay. I think this is one reason why these movies have been misunderstood. They don’t hammer you over the head with it as much as you might expect. I don’t see how my buddies who said the first one was “fascist” could come out of this one still thinking that was the intent, but it takes a while to get there. I see that as a good thing.

There’s a significant addition to Nascimento’s badass qualifications in this one: he practices Brazilian jiujitsu. We know this because of a scene where he spars with his son. It’s a really good scene about their relationship but also has what seems like a more authentic portrayal of the art then I’ve seen in a movie before. It turns out Rickson Gracie (star of the documentary CHOKE) was the consultant for this.

If anybody wants to watch this to figure what Padilha’s gonna do if he really ends up doing the ROBOCOP movie, there’s good news and bad news. I know you like the bad news first so I’ll tell you, the action is all done handheld. It actually looks more like real documentary camerawork than alot of these modern “shakycam” movies, but it really does make it difficult to know how well he can stage an action scene, because you’re too busy trying to focus your eyes onto Nascimento’s face to really know where he’s going exactly.

The good news is that this is further evidence that Padilha must be interested in the substance of the Robocop concept, not just the shiny surface. This is a story about a guy who builds a police squad into an army, uses extreme violations of human rights from beatings to mass wiretappings, and (SPOILER) ultimately decides that it all has to be dismantled. If they have to remake ROBOCOP this is amazing that they didn’t just get some slick director of TV commercials, they actually got a thinker who has spent alot of time on the issues of the original movie and many that extend naturally out of the first movie.

Ah shit, I just convinced myself that Padilha’s gonna waste a couple years on ROBOCOP and then get dumped. I hope he gets some money out of it, then. Poor guy.

Anyway, the word I’d heard on ELITE SQUAD 2 was that it was more of a straight-up crowdpleaser than the first one, more of an action movie fantasy going for stick-it-to-the-man entertainment. It’s the highest grossing movie in Brazil ever, including Hollywood movies. It beat AVATAR there. But it seemed to me like this one spent alot more time explaining politics than the first one did and less time with the thrills. It definitely works, and builds to an exciting climax, but I prefer the first one as a chaotic portrait of well-meaning people hopelessly trying to claw their way out of a briar patch of violence and corruption. I saw the first one as more of a war drama than an action movie, and this one is more of a political thriller, I think.

But if they do want to go all-out action movie for a part 3 obviously Nascimento’s son has to be forced into an underground fighting tournament to the death and Nascimento and his elite squad will fight their way in to try to rescue him before the final round but then father and son have to duela bunch of experts in various martial arts and then at the end will be a little bit of the complex explanation of the rigged political system in Brazil. (2D in select theaters.)

Braulio Mantovani Brazil Jose Padilha Rickson Gracie Wagner Moura
This entry was posted on Thursday, December 8th, 2011 at 2:49 pm and is filed under Crime, Reviews. You can follow any responses to this entry through the RSS 2.0 feed. You can skip to the end and leave a response. Pinging is currently not allowed.