The most philosophically ambitious of the 3 PG-rated movies I watched is the one that’ll probly get the least credit for it, George Motherfuckin Two Men Enter One Man Leaves Miller’s HAPPY FEET TWO. And first of all I want to give them credit for spelling out the number in their sequel title and not misspelling it for a pun. I’m sure it’s not the first spelled out non-homonym sequel title in history, but I couldn’t name you another one.

I don’t like to discuss it too much publicly, but I happen to like the first HAPPY FEET. I saw it out of Miller devotion and Bartertown pride, but was surprised how good it actually was. I gotta kind of bear with it for the MOULIN ROUGE type rock musical aspects (elaborately re-orchestrated versions of well known pop songs are used as a metaphor for penguin mating squawks), though I respect their strangeness. What I do like is the rest of the movie which is treated as a serious penguin epic with a harrowing journey, stunning CGI landscapes, surreal SPACE ODYSSEY-esque encounters with human civilization, and an original Prince song on the end credits that he did unsolicited and for free because he liked the movie so much when they screened it to convince him to let them alter the pronouns in the lyrics to “Kiss.” 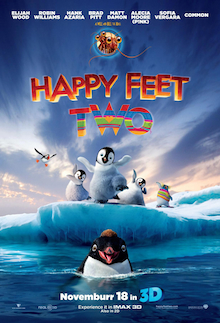 HAPPY FEET TWO is messier than the first one. It seems more interested in exploring Miller’s big ideas than zeroing in on a focused story. Part One’s hero Mumble (Elijah Wood from FLIPPER) is now grown up (but still freakishly fuzzy) and has a kid named Eric. The events of One have changed the status quo so that Mumbles’s unique gift of tapdancing is now a societal expectation, which causes great humiliation for his uncoordinated son, causing him to fall into the ice while dancing and then pee all over himself (I wonder why they didn’t make that more of a 3D gimmick?)

So Eric wanders off and discovers a mega-church type ice patch where part One’s guru Lovelace (Robin Williams) now plays second fiddle to a bigger star, a “flying penguin” who’s obviously a puffin (Hank Azaria). And Eric decides that’s what he wants to do, he wants to fly. So the movie sort of pulls the rug out from under the feel-good message of the first one. Maybe you can’t do anything you believe in. Maybe you can dream too big, even if your pops taught penguinkind to communicate with humans through tapdancing.

The best parts are little side incidents and happenings along the way. There’s a great scene where a monstrous elephant seal is kind of an asshole to him, suffers a karmic fall from a cliff, accepts that he’s done for and asks Mumbles for the favor of getting his 2 adorable pups home. But Mumbles is Christlike (or at least Babe 2-like) enough to try to rescue the dude instead.

I also like the scenes about Lovelace and the puffin guy being rescued by humans (live action ones). In these movies humans are like aliens, and their objects (a sweater, some garbage) are like the Ark of the Covenant or something that turns the animals they touch into gods among birds. It’s too bad about the wacky accents. But somehow a scene where the Williams character amuses humans with air guitar comes off… I don’t know… weirdly beautiful. It’s not like some joke out of ALADDIN. It’s a confused animal doing something he feels but doesn’t fully understand, and the people are somewhere in between having a laugh and communing with nature. I can’t really explain it.

There’s also a subplot about two krill voiced by Brad Pitt and Matt Damon. The pittkrill must be the Tyler Durden of tiny shrimp things, because he decides to swim in the opposite direction of the swarm and find out what happens. He ends up far enough away to see his people as an orange cloud being eaten by a whale. It’s as if he touched the monolith and saw a God’s eye view of his existence. He sees that his people are living their lives not knowing that their whole purpose is to be food, but he refuses to go along with that.

The krill go on a whole adventure and don’t talk to the penguins or anything. They’re like that squirrel in the ICE AGE saga except kinda deep. Some reviews have complained that they have nothing to do with the rest of the movie. Yeah, they’re mostly separate from the plot, but they have everything to do with the themes of both movies. Their tiny feet create a vibration that together with the cooperation of the rest of the eco-system, saves the penguins from a cave-in that was itself caused by a chain of events beginning with a single waterdrop. It’s all about how all the specieses are connected and about the importance of even the tiniest and most supposedly useless creatures. And if you think about it they never would’ve done it without the influence of Mumbles teaching everybody to dance. His art saves everybody for the second time.

In case anybody cares, the Three Dee in this one is along the lines of the Pixar movies – at first it looks pretty cool (especially in the krill swarm) but after a while you kind of forget it’s there. So it’s not a muddy detriment like some of the fake 3D, but it’s not that much of an addition. I didn’t regret it though because I saw it in Imax and the big screen and sound system were a major plus.

I think you should all see this today in the most expensive format available ’cause it’s not doing all that hot and we don’t need an excuse for delay #36 on MAD MAX: FURY ROAD. Come on guys, we all benefit from this. Everybody better pitch in. The krill did.

Common dancing Elijah Wood George Miller Hank Azaria Robin Williams talking animals
This entry was posted on Monday, December 5th, 2011 at 11:46 am and is filed under Cartoons and Shit, Family, Musical, Reviews. You can follow any responses to this entry through the RSS 2.0 feed. You can skip to the end and leave a response. Pinging is currently not allowed.