The Island of Lost Souls is an interesting island. That’s what Ed Parker (Richard Arlen) finds out when he shipwrecks and the drunk captain (Paul Hurst) of the boat that rescues him dumps him along with the cargo on this small slice of uncharted jungle property. Dr. Moreau (Charles Laughton) is out there doing some cutting-edge scientifically research with one colleague, Montgomery (Arthur Hohl). He’s somehow figured out how to bypass millions of years of evolution and has created futuristic plants, including giant asparagus. He lives with a pretty young weirdo girl named Lota (The Panther Woman) and a staff of hairy servants who Parker believes are the “strange looking natives” of the island. Yeah, they look strange all right, they look like the wolf boy on the cover of the told freaks video.

And (SPOILER) [SERIOUSLY GUYS THIS IS GIVING IT AWAY] all these hairy people (TURN BACK NOW) are actually ani(SPOILER)mals that he made into almost-people. The ones that aren’t on his staff live out in straw huts. And he must’ve been at this for a while, because it’s a pretty populated village. They’re lost souls I guess so they don’t truly understand the difference between right and wrong (or wright and rong), instead they have to be indoctrinated by hairy Bela Lugosi as “The Law Sayer,” who just recites a series of rules to them every night. And if they get out of line Moreau enhanced-interrogates them in “The House of Pain” to remind them what’s what.

At first it’s a novel place for Parker to visit, but he wants to get back home to his fiancee (Leila Hyams) on the mainland, especially after he starts getting glimpses of vivisections and shit, and wants nothing to do with this island. But Moreau strands him there longer ’cause he’s hoping Ed will fuck the panther girl. That could be a good experiment. 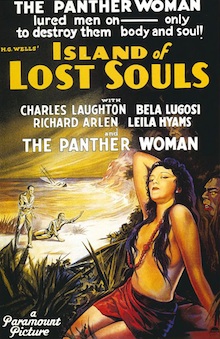 Isn’t that a great evil plan for a mad scientist? To trick his guest into fucking an animal woman? Ed doesn’t catch wind of the plot, but he can tell the girl has a crush on him, so he tries to do the honorable thing and explain that he’s in love with a gal back at home. But Lota doesn’t know what this “love” is so she rubs up against him and he can’t resist, he kisses her.

Then he stops. Is it because he’s thinking of his gal Ruth and second-guessing the plans of his johnson? Or does Lota have one of those sandpaper tongues that cats have? Maybe panther breath? Well, he tries again, but he feels her fingers on his back, looks and sees that she has claws. Oh shit – animal person!

There’s a long shot of the shocked look on his face, and him thinking, eyes darting back and forth. And we know that he’s thinking “I better go confront Moreau about this,” because that’s what he does next. But is it possible he spends some of that time considering going through with it? At any point during that shot is he thinking whether it’s completely disgusting or kind of hot to fuck the panther girl? I think yes.

Moreau is a great character. I guess in the book he’s more nuanced, he’s not such a sadist, he truly believes that what he’s doing is good. But you get some of that here. He can conceive of himself turning animals into humans, but not of treating them like humans. He still uses them as his lackeys, controls them and physically abuses them. My favorite example of his sick mindset is when he yanks Lota by the hair to point to her tears and show that she’s human. Okay, if she’s human why are you treating her like that? On second thought, maybe he does treat humans like that. Maybe he’s just an asshole. Talented scientist, though.

There’s a great atmosphere. The makeup effects stand up as perfect to this day. They’re creepy and hideous but still human, and the actors seem authentically subhuman. The scenes in the village feel nightmarish but real – the night sky, a crowd of monster faces lit by torchlight, voices all around like there are plenty more in the dark somewhere outside of our sight. Bela wears pants and a button-up work shirt, trying hard to be human. It seems like that’s all they want. In fact, the scary part in my opinion is not so much them being animals as them being treated like shit. I mean, there’s alot of them out there and only a couple homo sapiens inside that mansion. And we’ve seen that they can get in. They’re strong and they have sharp teeth. If they ever decide they’ve had enough of Dr. Moreau I think they’ll figure out what to do.

It was weird watching this right after Gaddafi got killed in Libya. I couldn’t help but make connections. The lost souls have long been under the tyrannical rule of Moreau, terrified of him, victim to his cruelty, not really knowing anything else. Some are treated better by him, some are loyal to him, some are made to do sick shit for him, and afterwards they blame him: “He tell me spill blood!” But eventually the people figure out they don’t need him, shit hits the fan, they tear him apart. It’s the story of any dictator.

I’d never seen this before and I watched it on the new Criterion blu-ray. While the transfer is not as flawless and crisp as some of the Criterions it does look really nice and apparently is miles ahead of previous editions. Probly the best anybody’s gonna be able to do. The extras are good too. They have a discussion about the movie between John Landis, Bob Burns and Rick Baker. I enjoyed that but was more excited about the interview with Richard Stanley, the original director of the 1996 Marlon Brando version who was replaced by John Frankenheimer early in shooting. Yes, he does get into what happened and while I still think there’s probly more to be said he does give me a different impression of the events than I had before.

I always thought he got fired because the studio hated his take on it, but the way he tells it it was a financial disaster so they pulled the plug on the whole thing, he collected his play-or-pay deal and just didn’t come back when the project miraculously came back to life. There’s also the legend of him camping out in the rain forest and spying on the production while disguised as a dogman extra. He tells that story too but not as if he was crazed and disgruntled. He just says he had all this studio money so he decided to live in nature with a couple dogs or whatever. He’s just a rugged Australian outdoorsy dude I guess. Then one day he’s on the river and runs into some people from the crew, they tell him how unhappy they are with the new regime and convince him to come check it out to make himself feel better about not being involved anymore.

I don’t know man, I still love that movie, but I like the story he tells. At the end he apologizes for having anything to do with the “desecration” of the book. He doesn’t seem to think LOST SOULS does it justice either, but says it’s his favorite version (duh).

Another featurette is an interview with Devo, showing clips from a short film they made and how their whole concept of “Are we not men?” and “devolution” comes from ISLAND OF LOST SOULS. Pretty interesting. Too bad they don’t have a featurette about pioneering white rappers House of Pain though, that could’ve been good too.

It’s funny how that poster up there blames the whole thing on the Panther Woman, like she purposely lured people onto the island and messed with them. Not true at all. She’s even more of a victim in this whole thing than he is. And now she takes the fall in the marketing. The actress – who is credited as “The Panther Woman” on the opening credits, but Anglicized her name to “Kathleen Burke” on the end credits, was a dental assistant who won a contest to play the role, submitting her photo and being chosen over 60,000 other entries. She went on to be in 21 other movies over the next six years, including MURDERS IN THE ZOO, BULLDOG DRUMMOND STRIKES BACK, THE LIVES OF A BENGAL LANCER and THE LION MAN. She lived until 1980, wasn’t ever caught eating somebody’s chickens or anything like that so I assume she fully adjusted to the human lifestyle and lived happily ever after.

I doubt the same happened on that island, though. Surely the power vacuum left by Dr. Moreau’s absence led to all kinds of sectarian strife and shit. I’m sure many fought for the creation of a compassionate democracy, perhaps with Sayer of the Law as interim prime minister until some form of animal senate or council could be voted in. But you fuckin know eventually some charismatic tiger man or something came along, put together a powerful militia, took control and probably brought back an even more fucked up version of the House of Pain… there could be some crazy shit going on there and I don’t know if we want to get involved but it could definitely come back to bite us on the ass. Or I guess more likely on the back of the legs is how animals usually do it.

Anyway, this is an excellent movie and it’s from Paramount, a studio that didn’t really get in too much on the horror bandwagon back then. But it’s as good and beautiful as my favorite Universal classics. The director, Erle C. Kenton, later did some Universal ones in the ’40s (THE GHOST OF FRANKENSTEIN, HOUSE OF FRANKENSTEIN, HOUSE OF DRACULA). I think I liked some of those, but not like this.

Bela Lugosi Charles Laughton H.G. Wells
This entry was posted on Monday, October 31st, 2011 at 12:39 pm and is filed under Horror, Reviews. You can follow any responses to this entry through the RSS 2.0 feed. You can skip to the end and leave a response. Pinging is currently not allowed.

9 Responses to “Island of Lost Souls”