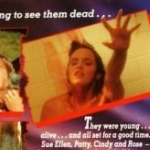 To me the strangest part of the movie is the opening. You have a long pan around a house, spying on these college girls through the windows. On one hand it’s a well-executed John Carpenter type shot like I love. On the other hand a horror movie that has a bunch of girls hanging around in their underwear for no reason generally does not have respect for its characters or viewers.

Anyway, you can hear giggly female voices, and it seems less like bad dubbing of the girls inside than an indication that the subjective point of view we’re seeing is some girls joking around, not some creepo stalker or peeping tom. Then the prying eye of the camera watches one of the girls inside get into the shower and make real sure that her boobs are clean, and then there’s an awkward re-creation of the PSYCHO shower scene, with a shitty keyboard version of the screeching soundtrack, the shower curtain breaking off hook-by-hook, the blood going down the drain.

I thought okay, they’re playing a prank, but then shower girl screams, she bleeds, she drops against the wall, slides down and lays there dead. I guess it’s a real stabbing. Cut to the next day, our four female protagonists standing in a long, quiet hallway… waiting to talk to a nun about the prank they played with the rubber knife. I don’t get it… why did she seem to think she was really stabbed? Why did she play along? 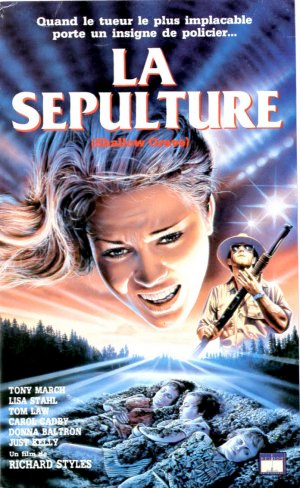 But they go on their road trip, and the filmatists seem conscious about either commenting on or parodying a certain archetype of superficial teenage girl. Like, you’re definitely supposed to face palm when one girl does not seem ashamed that she ditched the spare tire to fit more luggage in the trunk. One girl complains that changing the tire would be bad for her nails – later we see them scraping against the car as the maniac cop is choking her to death. But there’s one girl who’s the smart one, who’s gonna write their 100 page punishment essay, who knows how to change a tire, who gets sick of these bitches and heads for the gas station on foot.

There is one weird racial moment. When this group of white girls stop at a barbecue joint in South Carolina they see a black man walking in and Sue Ellen says, “I’m not going in there” and “there are probly rapists in there.” To be fair, the guy is a big bouncer-sized guy and that’s probly why she’s supposed to be afraid of him, but when they do walk in and most of the clientele are black I think it shows that my suspicions aren’t completely out of line. Anyway, two young white dudes also on their way to Florida walk in, there is some incredibly stiff, awkward flirtation, and this sets up the idea that the two guys are supposed to meet them for breakfast and come looking for them when they don’t show up. But nothing much comes of it, just like nothing much comes of the racism (although the sheriff’s office does have a Confederate flag inside).

Before Sue Ellen witnesses the murder she comes across these two having sex in the woods, and she thinks it’s funny. Ha ha, sex. But it turns serious when they get into a violent argument. At first the sheriff is naked, then he puts his pants on during the argument, he’s still shirtless during the murder. I thought it would be cool if it was kind of a DIE HARD thing, he has to cover up his crime while still shirtless, then at the end he goes back and finishes getting dressed. They don’t go that route, but at least they use the shirt as a reveal, because when he puts it on you see the badge and realize how much trouble the girls are in.

It’s strange how serious the movie gets once it turns into a cat and mice chase. No more jokin around, one laugh when a scene revolves around Sue Ellen reaching into a window and getting her arm mauled by a dog, and that’s just funny because it takes balls to do that with only barking sounds and never showing a dog at all. I’m gonna give them the benefit of the doubt that it was an intentional artistic choice and not that they were afraid of filming dogs. (In their defense, there is later a scene with a real snake.)

I kind of like how it switches to a story about the killer sheriff going through the motions of investigating, and the suspense is about whether or not his doofus deputy (Tom Law) will figure out that these girls are telling him the truth.

You know what, I gotta take it back, the PSYCHO shower scene is not the strangest part of the movie. The actual strangest part of the movie would be the suddenly arty rape/murder scene in the jail cell. The sheriff has one of these poor girls in custody, he goes inside the holding cell and demands she take her clothes off. Don’t worry, it doesn’t turn graphic, and I don’t think he technically goes through with the rape, but it’s a different type of horrible: it switches to romance movie filmatism, with their mouths in slow motion moving toward each other like they’re going to kiss. Is she giving in? Is she actually willing? They hesitate. Will they? Won’t they? And then he strangles her and leaves her dead. Kind of harsh in a movie that started with a practical joke.

The approach to this scene is already mysterious enough, but they add another layer of weirdness: over the soundtrack we hear the sound of some Christian preacher’s sermon, like a radio evangelist show or something. Is this supposed to be some point about that they go to a religious school? That they don’t take the religion seriously? That they’re Catholic and this sermon is probly Baptist or something? I have no clue, I’m sure it was either supposed to mean something or seem like it meant something, but that’s all I can figure.

This is not a good example of a slasher movie, but for someone like me who enjoys seeing all the possible variations it was distinct enough to be worth my time. Rookie director Richard Styles has only done a few since then, including MIDNIGHT TEASE II and SORCERESS II: THE TEMPTRESS, but he has a new one coming out this year.

Lisa Stahl Richard Styles Slasher Search slashers Spring Break Tony March
This entry was posted on Thursday, October 31st, 2013 at 12:46 pm and is filed under Horror, Reviews. You can follow any responses to this entry through the RSS 2.0 feed. You can skip to the end and leave a response. Pinging is currently not allowed.