While almost all of the slasher movies I find on VHS are low budget and low skill level, NIGHT SCHOOL actually seems like a higher budget studio take on the genre. Released in 1981, just enough time for the studios to notice how much money HALLOWEEN made and start cashing in, it’s slickly made with nice, deliberate camera moves and high production values (even a vehicle chase on the streets of Boston). And it’s pretty good, too. I thought I’d discovered one of the last VHS-only gems, but then I found out it just came out on DVD from Warner Archive.

At first I thought this might not fit my definition of a slasher movie, because it has kind of a police procedural element, following the detective that’s trying to figure out who’s doing the murders instead of a group of kids in a cabin or whatever. But then I realized it’s not that far from the structure of HALLOWEEN, which spends alot of time on Dr. Loomis and Sheriff Bracket trying to find Michael. Or it’s also alot like a giallo movie. So everything’s okay, let’s all calm down, it’s a slasher, everybody. 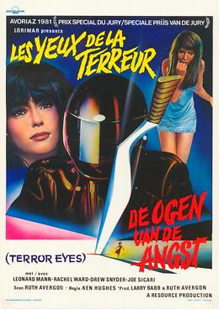 This  has one of the best done opening scare scenes I’ve come across in a long time. A pretty young teacher’s assistant at a daycare sits on a merry-go-round with a little girl, holding a pinwheel, waiting for the last of the parents to pick up their kids. It’s dark and you get a strong feeling of the end of a long shift, outside in the city as the neighborhood is going from bustling work day to quiet night. She ends up sitting alone on this playground equipment, seeming to need some time to think about something, or just to let her mind go and enjoy the peace and solitude. And then, of course, an attacker hidden behind a motorcycle helmet approaches.

We find out that this motorcyclist/Daft Punk cosplayer is on a murder spree, using his ritualistic blade to decapitate women and leave their heads floating in water. Two of the victims attended the same women-only night school, which in my opinion is the main reason, perhaps even the only reason, why the movie is called NIGHT SCHOOL.

The movie does a pretty good job of leading your suspicions as you meet the various people around: a friend of the victim, an anthropology professor and other employees of the school, the various people who hang out and work at a nearby cafe. The female lead is the professor’s assistant, British exchange student Eleanor, played by Rachel Ward. One thing that’s kind of unintentionally funny is this guy Drew Snyder who plays the professor. He’s this smooth ladies man who multiple good looking young women have affairs with, and the waitress at the cafe talks about how dreamy he is. But I don’t know, this is what he looks like:

Not saying he’s ugly, but he sure doesn’t look like the pussy-magnet the movie portrays him as. I’m suspicious.

There are some gruesome sights in the movie, including a severed head dumped in a public aquarium and scaring an innocent old lady (I’d like to think the management gave her free passes to an Imax showing or something). More than that though the filmatists play with your dread about what somebody’s gonna find. The best example is when the manager of the cafe opens up the morning after a murder and it takes its sweet time letting us know where he’s gonna find the head while trying to whip together breakfast for a couple of his construction worker regulars.

That’s what this movie has that lesser horror movies are lacking: suspense chops. I figured out what was going on pretty early and the explanation is novel but not mindblowing. But it didn’t really matter because the sequences where people get chased or stalked or where they find the bodies are done by pros. They really play on the fears of women (or people in general) alone at night: thinking somebody’s following you on the street, thinking you hear a sound in your apartment, not hearing the sound in the apartment when there actually is one. As poor Eleanor tries to walk faster and faster down the street you wonder why anybody would think it was a good idea to wear high heels. Geez. Not convenient.

While HALLOWEEN was one of the first couple movies from a promising young director, NIGHT SCHOOL was the last by a Hollywood veteran. Kenneth Hughes started directing in ’52. Some of his more famous works include OF HUMAN BONDAGE with Kim Novak, CHITTY CHITTY BANG BANG, CROMWELL and THE INTERNECINE PROJECT. He didn’t die until 2001, so maybe he figured he wanted to end on this one, I don’t know.

I never heard of this one before renting it, and looking it up it doesn’t seem to have too good of a reputation, the main complaint apparently being that it allegedly doesn’t have enough gore. (Gore is like salt, it’s always too much for somebody and not enough for somebody else. You guys just gotta stop being so finicky.) But I thought it was real solid. It’s no VISITING HOURS but it’s easily one of the best I’ve stumbled on so far in these slasher searches.

Ken Hughes Rachel Ward Slasher Search slashers
This entry was posted on Thursday, October 20th, 2011 at 3:09 am and is filed under Horror, Reviews. You can follow any responses to this entry through the RSS 2.0 feed. You can skip to the end and leave a response. Pinging is currently not allowed.