I meant to see APOCALYPTO this week but I was too god damn sick to haul my ass to the theater. So I figured what the hell, it’s December, I’m Vern – might as well revisit LETHAL WEAPON. Haven’t seen that one since the ’80s. One of my buddies swears by it.

Well, it was interesting to watch this movie again, and I had fun, but I can’t say it has aged too well. I know it’s not fair to compare everything to DIE HARD, but LETHAL WEAPON is no DIE HARD. Bruce knew to keep the hair conservative, it will be timeless, no problem. His hair in that movie is so not dated that today, when the LIVE FREE OR DIE HARD teaser debuted online, everybody was pissed that he didn’t have the old hair do. 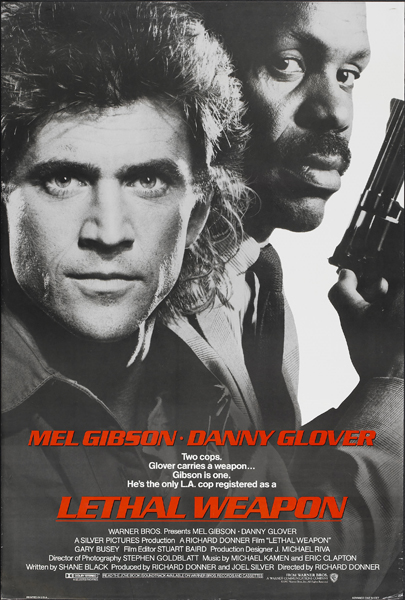 Not so Mel Gibson’s do in LETHAL WEAPON. That fuckin thing better be in a vault somewhere covered in ten feet of lead. What is it about the fuckin ’80s man, where even a ridiculous hair do can be so toxic as to not be cool years later? I mean, you find some silly flip hair do girls wore in the ’60s, or an afro from the ’70s, hell, the fancy high top fades from the ’90s even fair better than pretty much anything these people were trying to do in the ’80s. You cannot look at Mel Gibson’s lion mane of a mullet and take him seriously. Everything else is fine. He’s still lean like MAD MAX, he looks young but he seems grizzled, like life has tossed him through a few windows. He walks with a swagger, he dangles a cigarette from his mouth, he is completely nuts. But still, the fuckin mullet.

(not that the blonde girl who kills herself at the beginning is any better. What the hell was wrong with us, is what I’m asking.)

And then the music. DIE HARD knew what it was doing. Sure, Argyle listens to the Run DMC song in the limo, that’s dated. But the score is all classical. Some of those songs are hundreds of years old. Timeless. LETHAL WEAPON goes the opposite route. It asks, “How can we make a score that will make this movie seem ridiculous as soon as possible?” They called upon the same man who would score DIE HARD, Michael Kamen. Obviously he could not do it on his own so he sub-contracted it out to two experts: Eric Clapton and David Sanborn. (Kenny G was busy holding that one note forever so he couldn’t do it.) Now I know, I know, I don’t mean to insult Eric Clapton, I got nothing against Eric Clapton’s career as a whole. But that does not excuse him for the invention of the Cop Movie White Man’s Blues Guitar style. At least that’s my guess is he invented it and the success of this movie is what started that whole debacle. If he didn’t invent it then it’s almost worse that a man of his stature would come in and play this style. If there is one thing that does NOT make the action more intense for me it is the occasional guitar noodling of a white man trying to sound bluesy.

And you know what, Mel Gibson’s character could sure sing the blues. His wife was killed in a car accident. He lives in a trailer. He carries a hollow point bullet which every day he considers firing into his mouth. Only his job keeps him alive, but while on the job he carelessly risks his life, because he doesn’t care if he dies. Save a bullet, I guess. So if they had a real blues guitarist on here it might even work. A Howlin’ Wolf or a Muddy Waters or somebody. Not an Eric Clapton. And if so don’t saddle him with fuckin David Sanborn.

Apparently Shane Black was 22 when he sold this script, so it’s funny that he’s telling a story about two Vietnam vet cops, one who’s dealing with his 50th birthday and the other who’s suicidal due to the loss of his wife and everybody at work thinks he’s faking it to get disability. I guess that’s what 22 year olds are into. I really like the premise of the movie that Riggs is suicidal and uses this for his police work. This leads to a couple funny scenes, like when there’s a sniper shooting kids and he figures out that the guy’s not a very good shot, so he walks right out into range of the window and shoots back at him.

You would think maybe Riggs is a “lethal weapon” because he doesn’t give a fuck, but Murtaugh states that he is “into martial arts” and asks “should we register you as a lethal weapon?” and I’m afraid that even in 1987 America should’ve known better than to consider Mel Gibson a martial arts expert. They wouldn’t have let him get away with that in his native land of Australia, so we should never have accepted it here. He does a good job though. He’s charming, and gets to go off his rocker in a way he doesn’t do in many other movies (no, I will not make an anti-semitism joke here). He doesn’t entirely hide his Australian accent either, so you can tell this was a long time ago.

Danny Glover (PREDATOR 2) is good, Gary Busey (PREDATOR 2) is the villain, so you got some good stuff in here, much like the movie PREDATOR 2. There is the surprising scene where the house explodes out of the blue, and the funny scene with the neighborhood kids afterwards. But to me, this only stands out a little bit from all the other stuff that copied it. The mystery is not all that fascinating. Gary Busey doesn’t get as much to do as in UNDER SIEGE, etc. As far as action, well, I will not say how it compares to DIE HARD.

Not bad, but let’s not be building any monuments or anything.

Mel Gibson Shane Black
This entry was posted on Thursday, December 14th, 2006 at 3:18 am and is filed under Action, Crime, Reviews, Thriller. You can follow any responses to this entry through the RSS 2.0 feed. You can skip to the end and leave a response. Pinging is currently not allowed.