Okay, stop the presses, I just looked it up (it turns out I’m on the internet right now). I guess Formula 1 is very secretive like the Masons so Stallone couldn’t get enough info on them and switched the movie to be about “ChampCar” racing. I guess that’s why they didn’t make a big deal of what type of racing it was in the movie, ’cause nobody was gonna get excited about something called “ChampCar.”

It’s an ensemble cast. Kip Pardue from RULES OF ATTRACTION (who still looks like a teenager here) is the young hotshot racing prodigy, Robert Sean Leonard is his brother and douchebag manager, Til Schweiger from INGLOURIOUS BASTERDS is his rival driver, Estella Warren is Schweiger’s girl who switches over to Pardue at one point, and then Stallone is Joe Tanto (an ancestor of Machine Gun Joe Paturbo?) who’s been out of racing for a while, gets called back, butts heads with the other characters, teaches them lessons, etc. Cast members who get somewhat short-changed include Burt Reynolds (with mustache) as the paraplegic coach or whatever, Gina Gershon as Stallone’s crazy ex-wife, Cristian de La Fuente as her new husband, and Stacy Edwards as a reporter. 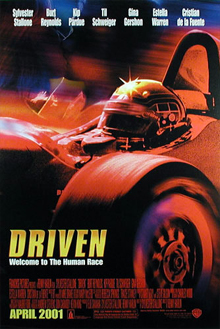 What makes DRIVEN feel really odd is the expectations of being a Stallone movie. He wrote it, his name is above the title, his giant face is on most of the posters, the first shot is an extreme closeup of his eyes. But if it was just some dude playing him I wouldn’t keep thinking he was the main character. Of course he’s an important part of the ensemble, but the story is more about the rivalry between the two younger racers. In fact during the movie’s most dramatic sequence of events, when two of the racers quit the race to rescue another who’s crashed into water and surrounded by burning fuel, Stallone stays out of it.

The story is interesting in the sense that alot of it doesn’t go the way you would assume it would. For example Stallone’s character Joe comes back thinking he’s got a new shot at winning, but Reynolds uses tricks to hold him back and makes him illegally block Schweiger to help the kid win. And then he dramatically faces off with Burt and tells him to never ask him to do that again. Normally this means they’ll have another incident but Joe will refuse and win the race or something like that. Instead he just remains a supporting team member. The movie is never about him having a comeback or becoming a champion, or even trying to. At one point he says “I got nothin to prove,” and he’s pretty much right.

He’s definitely showing off when he does a trick of throwing a bunch of quarters on the track and driving over them so they stick to the tires. And he does it to the tune of that song that I guess must be called “Money Money Money (Money).” But otherwise he stays pretty humble.

Some of the character relationships are interesting too. They’re rivals and they get mad at each other, but they also kind of like each other. I like Stallone’s interactions with de la Fuente because they should hate each other because of Gershon (and she tries her hardest) but the new husband is really nice so they stay friends the whole time. (Not sure why either of ’em stay with that crazy bitch though.)

I’m not saying it’s realistic, but it’s sadly lacking in preposterousness for a Renny Harlin joint. One major exception is when the two young racers get in a fight over the girl at a party. Pardue throws a fit and takes off in a race car that happens to be on display and fully operational. Stallone, in his role as troop leader or resident advisor, jumps in the other decorative car and chases after him, so basically they have a 195 mph chase through downtown Chicago. When it’s all over they’re able to stand in the road and have an emotionally charged conversation without the cops ever having any words with them.

One odd touch is the lack of emotion everybody seems to show when there’s a horrible car crash. I know it’s their profession and everything but you’d think a brother, girlfriend, wife or mentor would betray some slight hint of concern when their loved one is flipping through the air in a burning chunk of metal. I guess somebody told them it was PG-13.

Estella Warren was a model-turned-actress who showed up again later in the summer in PLANET OF THE APES, so she was hyped up at the time as kind of an “It Girl.” Since then she’s done some smaller movies and a week or two ago was arrested for allegedly hitting 3 parked cars during a DUI. She’s not bad in this, but seems too exotically beautiful for the race track. I was relieved when she turned out to just be a girlfriend and not a mechanic or something. Her hobby is displaying her crotch in a water dancing routine performed in a hotel swimming pool (turns out Warren is a three time Canadian national champion in synchronized swimming, so that was a good use of her talents).

THE FAST AND THE FURIOUS came out later in the summer and was clearly the world’s preferred car race movie. The race scenes here don’t have the same sort of flashy artificial look. It’s fairly lo-fi (I think some of the crashes were even done with miniatures) but Harlin’s definitely dipping into the bag of filmatical tricks to get through all these different races in different cities. It actually feels like the movie is about half montage, with all these condensed races and quick establishing shots of race fans, chubby people stuffing down hot dogs, suggestive churro eating girls, etc. The dvd extras brag about “3,000 shot setups.” Most of the racing has to be constantly explained by color commentators. It kept reminding me of TALLADEGA NIGHTS. I’m not sure if that’s ’cause that movie was based on this or because both were based on DAYS OF THUNDER.

This failed to be a great racing movie or a great Stallone movie, but it’s not terrible. I guess I was about right when I kind of wanted to see it but never got around to it for ten years.

legacy: DRIVEN lost a bunch of money and pretty much knocked Harlin out of the A or B or whichever list he was on after recovering from CUT THROAT ISLAND. It took him three years to get another movie made, and that was MINDHUNTERS. It also helped send Stallone into a post-COP LAND rough patch, finally recovering five years later with a much better old-athlete-out-of-retirement movie, ROCKY BALBOA.

2001-2011 connections: I guess Stallone does the voice for an animal in some Kevin James movie that’s coming out

Would they make a movie this today? Probly not, but it doesn’t really seem hugely dated, other than not acknowledging their sport being overshadowed by NASCAR.

Burt Reynolds car racing cars Estella Warren Gina Gershon Kip Pardue Renny Harlin Robert Sean Leonard Sylvester Stallone Til Schweiger
This entry was posted on Wednesday, June 8th, 2011 at 9:34 am and is filed under Drama, Reviews. You can follow any responses to this entry through the RSS 2.0 feed. You can skip to the end and leave a response. Pinging is currently not allowed.