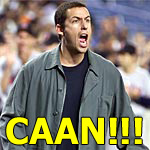 I found several to choose from – you got golf, you got babysitting, you got kindergarten, etc. The choice was obvious, Bulletproof. 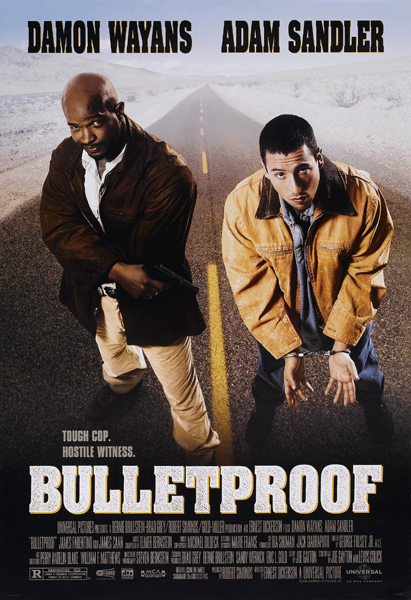 In this movie he plays Archie Moses, a car thief who also is the right hand man in a huge drug empire. He decides to introduce his partner Rock Keats to the big boss man, and even before that he keeps mentioning how he’s his best friend, he’s the only person he trusts etc. and holy jesus, I nearly wet my pants in surprise when the dude turned out to be an undercover cop. (sarcasm)

Well when the bust goes down Archie shoots Rock in the head by accident but Rock survives and then it turns out to be this squabbling buddy movie where Rock has to have Archie in protective custody. And they hate each other because one of them betrayed the other and the other shot the other. You know. And then the drug lords are trying to kill them and what not. But you get it, they’re always bickering and insulting the other and what not. And fighting and everything, that’s where the comedy is, when they argue.

Believe it or not I think this is going for a John Woo type feel. I mean think about it… Bulletproof, Hard Boiled. Similar titles. Then you got the whole undercover cop bonds with criminal and feels guilty deal. And you even got the guy who survived a bullet in the head which I understand is a theme in one of Woo’s films, I believe it’s Bullet in the Head that has that. But Bulletproof is done in a real crappy sub-Beverly Hills Cop sequel kind of way and it’s all pretty much garbage. Nothing about it is original or very believable, especially this Damon Wayans who plays Rock. The guy just doesn’t have it in him to seem tough and he really fumbles the ebonics as well. His anger at Archie never feels genuine and while I’m at it WHAT THE FUCK kind of name is “archie moses”? And they say it over and over. Thanks alot mister scriptwriter. You’re fired.

Anyway Sandler is the best part of the movie because he has three or four funny lines I guess. But come on, this guy looks like the assistant manager at a grocery store or something, he is not the right hand man in an untouchable criminal empire. They work it into the script that he’s a puss but they don’t get that many laughs out of it. so I don’t know HOW this motherfucker becomes a #1 box office star unless he’s done some karate training or what not since this picture was filmed. Seriously bud, no joke here, I honestly think I could make this man cry just by staring him. And yes I am a tough man, but okay, I think some of you motherfuckers who maybe are fairly tough, but not as tough as me, I think you could also make him cry in this manner. In my opinion. He is nothing to Write home about.

To be frankly honest, I guess it’s like the kids say “are you smoking crack?” I don’t see what the big deal is about Sandler. I would definitely put him WELL below the Bruces, Jet Li, Jackie Chan as well as Van Damme and Seagal. Sorry Adam. Just tellin it like it is that’s just what I do plain and simple.

Adam Sandler Damon Wayans Elmer Bernstein Ernest Dickerson James Caan
This entry was posted on Monday, January 1st, 2001 at 4:06 pm and is filed under Action, Comedy/Laffs, Reviews. You can follow any responses to this entry through the RSS 2.0 feed. You can skip to the end and leave a response. Pinging is currently not allowed.