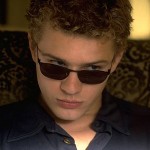 The difference is, the ’90s boys went to college. Or read alot of books. Studied alot of movies. The ’70s boys traveled the world, drank alot of whiskie, got in fights and drag races. The ’70s boys had a natural knack for the poetry of Badass Cinematics, while the ’90s boys had a great knowledge of technique and equipment and approaches to witty dialogue. Now obviously there are many exceptions to this rule, but it is a good sweeping generalization to ponder. The ’70s masters like Peckinpah and Leone and Siegel and Mr. Eastwood had an effortless feel to their films, like it was just something that came out of their pores. The ’90s ones, even the really good ones, usually seem like they put a whole fucking lot of thought into it. Drew alot of schematics and diagrams. And figured out how to do it just right. 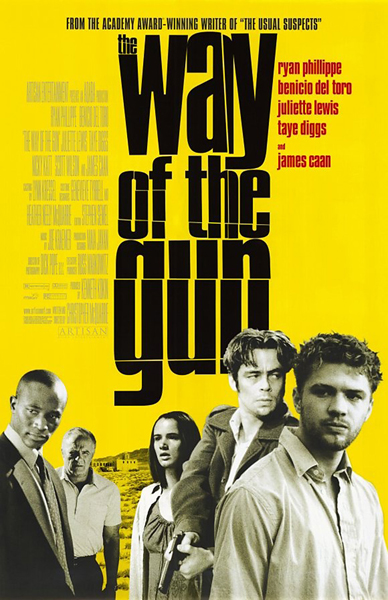 Of course, some of the best have a little of both. Mr. Quentin Tarantino for example is world reknowned for having sat on his ass watching hundreds of bad ’70s movies on video in order to learn his skills. However in my opinion his movies have more of that ’70s feel than anyone else. The quiet realism and the authentic swagger that is key to a successful Badass picture. At the same time, Tarantino’s pictures are much more talkative and postmodern, with characters jabbering on dissecting and psychoanalyzing and reinterpreting the icons of past television and music. “Like a Virgin” and Get Christie Love and the Fantastic Four. Obsessing over hit that may not even EXIST in the world that Clint Eastwood usually lives in. (although there are jazz records.)

Way of the Gun is the directoring debut of Christopher McQuarrie, the academy award (Oscar) winning writer of The Usual Suspects. Now don’t get me wrong, I think Usual Suspects is a good movie. But it is the perfect model of the ’90s style academic approach to Badass film. Suspects is a great work of telling-a-story, and from beginning to end feels like the work of a born Cinematist. Director Bryan Singer of course went on to use this natural talent in Apt Pupil and to revive the career of the aging Clint Eastwood as young Hugh Jackman in X-Men. Was it Singer’s strengths that managed to make this script work, even with McQuarries indulgent bag of tricks? All the knowing plot twists and novel character traits and novelistic voicovers and turnarounds and whatnots? Or was it indeed this gimmicky style that made the picture so enjoyable?

McQuarrie claims to have been at odds with the gimmickry of The Usual Suspects, and therefore sort of reluctant to come back to the Badass genre. At times in Way of the Gun he seems to have consciously broken free of the restrictions of his own intelligence. Thank god. The movie opens like some drunken bar story, with a pointless fight outside a club which has no literal connection to the story (although in retrospect it works as somewhat of a parallel to the rest of the story – McQuarrie the graduate student leaking through) and then proceeds as a modern day western. The protagonists are two men with no names, Ryan Phillipe and Benicio Del Toro. We don’t know where they are from or what their past is and we never really find out much about them, except that they are criminals with very few qualms who stumble upon a surrogate mother who they think could make for some valuable ransom. So they kidnap her and get mixed up with some shady criminals. How many times are they gonna shoot their way out? How are they gonna get their money? And good god what if little Ryan starts growing a conscience in the middle of all this?

The gunfights are great. Not graceful like Mr. Woo’s, which are always referred to as ballet. These are more like ultimate fighting. Loud and chaotic. Like a war zone. And the motherfuckers never stop shooting. You know something is fishy early on when the bodyguards shoot the shit out of a parking lot just to go after the attempted kidnappers. The title of the movie implies something of a criticism of gun violence and there is definitely a feeling of Peckinpah’s moral outrage in the way these fights are depicted, with all the slow motion money shots left out and the prone corpses of innocent civilians left decorating the battle zone.

There is also a feeling of that poetic Peckinpah vitality just in the filmatism, in the many scenes where the details are told visually instead of through a bunch of bullshit and talking. In fact I gotta be honest there is so much visual storytelling in this picture I couldn’t even understand all of it, it was like they weren’t talking but they were still talking to fast for me to follow. I don’t know what exactly Benicio was doing with that convenience store clerk (watching a porno is my guess?) but it was funny anyway. I haven’t seen this Del Toro since his classic role as the fat guy in Fear and Loathing in Las Vegas. I don’t know WHAT in fuck’s name they did to slim down that sweaty freak and turn him into some kind of edgy male model with dark patches under his eyes. But hell if I was young I think i would wanna be this motherfucker. There is very little characterization in this guy, I don’t know shit about him but he sure does know how to stand around cool and smoke cool and squint his eyes cool. A great Badass performance and I look forward to seeing more from this individual.

In fact the whole cast is good, especially James Caan as a muscle bound tough guy with his nipples showing quite clearly through his shirt. And this other old guy who is introduced at home playing a casual game of russian roulette. Most of the pieces for a great crime movie are here, and there are some note perfect type Badass moments where everything is just right from the performance to the staging to the photographing. The music by some dude whose name I did not happen to read should be noted for its excellence. It sounds like some kind of western or something and right before any big action scenes its got these dramatically building drum rolls that tell you oh jesus, here comes the good part.

Unfortunately the gears get gummed up in the middle portion when the picture abandons our protagonists in a hotel in mexico and starts jabbering on and on about all the other people involved in this mess. This is when the ’90s approach comes into play.

You got the rich guy who is paying the surrogate mother a million dollars, but what is his background? You got the rich guy’s wife, why is she always snooping around? And the two bodyguards – who are they loyal to? And the bagman played by James Caan – who is he loyal to? What is his stake in all this? And the doctor. Who is he related to? Who is he screwing? What relationships do any of these characters secretly have with each other? What are their plans, and their motives, and their secret conspiracies and collusions and blah blah fucking blah. At first its intriguing, then at a certain point you think jesus McQuarrie, if you were trying to get away from The Usual Suspects you REALLY fucking blew it my man. Bring us back to mexico and AWAY from all this fucking intrigue!

It sort of reminded me of how in Magnolia every character is lonely and pathetic and for a while it is sad, and it gets sadder and sadder and eventually it’s so damn sad that you no longer feel sorry for these people and you are not touched by their desperation and you just want to go watch a musical or something. McQuarrie overloads that middle section with his bag of tricks. You gotta show a little restraint there buddy. After wondering about the secret motive of EVERY character I eventually have to say fuck it, I don’t care what ANY of these fuckwits are up to even if that means by the end I will not be entirely sure what happened because I will have lost track of who was in it with who and was trying to do what and why.

Sometimes all this complication works out. There is a type of moment in a good Badass film which I will call the OSIO moments. That stands for oh shit, it’s on. There is a great one in this movie where the Mexican cops show up at the hotel where Del Toro and Phillipe have been keeping the kidnapped gal. And then the two bodyguards come to get the pregnant girl back. And then out comes this old crazy guy who was left by the bagman James Caan to keep an eye on things. And Phillipe and Del Toro are up on the hill with an assault rifle and a scope and there is a bit of a language barrier going on down there and everybody has guns and different agendas and you’re watching all this and you just smile and you think oh shit, it’s on.

But there are other complications that really don’t pay off and things get so complicated that you just don’t give a fuck what they are plotting about and for the time being oh shit, it’s off.

But in that aforementioned OSIO scene the movie gets back to our no names in mexico and it starts feeling like The Wild Bunch and it starts falling back into that natural rhythm again, the rhythm of the Badass Cinema. There are themes of redemption in the movie that I think are a little too self conscious and literate to work in that simple Unforgiven way (“god damn it I don’t want to kill anymore but these situations keep coming up where I keep having to kill motherfuckers”) but I guess I’ll give McQuarrie points for trying to put some soul under the swagger. I like the way all this mayhem and greed and conspiracy surrounds the pure human act of a mother giving birth. I mean what could better describe human nature than a bunch of assholes killing each other and fighting over huge bags of money while a baby is being born?

Is this what the Badass picture of the 2000s will be like? A mutant crossbreed of the poetic approach and the intellectual approach? Or is this just a halfway there picture that represents the beginning of a return to the good old days? Or is my theory a bunch of bullshit anyway and I should just end this essay. yes I will go with the third one I guess, sorry.

Benicio Del Toro Christopher McQuarrie Geoffrey Lewis James Caan Ryan Phillipe
This entry was posted on Sunday, September 10th, 2000 at 8:46 am and is filed under Action, Crime, Drama, Reviews, Thriller. You can follow any responses to this entry through the RSS 2.0 feed. You can skip to the end and leave a response. Pinging is currently not allowed.

5 Responses to “The Way of the Gun”