Here’s a nice surprise, just something I found at the video store that I never heard of before, sounded interesting from the description on the box and it turned out it was. BESOURO is another movie based on the life of a legendary martial artist, except not an Asian one. This is a Brazilian film about a capoeira fighter.

The movie takes place in 1924. A narrator tells us that it’s less than 40 years after slavery ended in Brazil, that Africans are still treated like shit, that their religions and the practice of capoeira are outlawed. The setting is a small settlement where mostly African-Brazilians live, but they work in the sugar cane fields for an asshole white Colonel who uses the n-word more than 50 Cent does (played by Michael Richards [no, not really, but wouldn’t that be weird though?]). 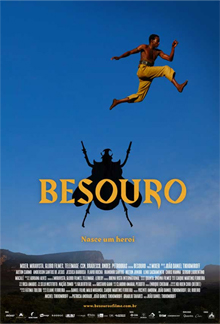 Besouro is the nickname of our hero (he’s named after a beetle, because he’s black and he can fly). He’s the number one student of an old master who teaches capoeira and is considered a leader in the black community. But one day Besouro is busy showing off his capoeira when he should be watching the master’s back, and the master gets murdered. Besouro’s own friends and community shun him, so he’s not even allowed to go to the funeral (he hides out and watches from the woods). He goes off to live in the forest where he communes with the spirit of the master, learns to inhabit the body of a frog and a beetle, learns mystical lessons, is taunted by a ghost, etc. By the way there is some magic stuff in this movie, it’s purposely based on the legends of the guy instead of the historical record. Sorry, historical record buffs. The guy’s not on wikipedia yet either.

Besouro has two best friends who grew up learning capoeira with him. One is a girl, the other one goes out with the girl, and there will be some issues there. Besouro’s buddy sort of develops an “I’m sure these white folks will be pretty cool to us” attitude while Besouro turns into a total militant, burning down the sugar cane fields and sabotaging the factory machines. It’s not mentioned whether or not anybody picks up any delicious goop off the ground after the fire, but if Besouro invented caramel no wonder he was worthy of a movie. Either way, he’s portrayed as the guy who stands up when the man won’t pay him, or when the authorities are beating people up. He takes a stand and inspires the people to follow his example. And teaches them how to kick. And likes women with natural hair.

It’s nice to see a guy doing martial arts against racists. I didn’t get enough of that out of NINJA VENGEANCE.

If you’re not familiar with capoeira, first of all you should watch Mark Dacascos in ONLY THE STRONG, which combines a primer on the artform with a corny teacher-helps-troubled-students movie and a topnotch Van Damme-esque martial arts picture. Second of all you should know that it’s a fighting style that is practiced with music. It involves alot of kicking, cartwheels and dodging, and it was developed by slaves to defend themselves from the slavedrivers when they were on the run. Visually it’s very unique and hasn’t been used in a huge amount of movies, although Lateef Crowder has been able to do some in TOM YUM GOONG/THE PROTECTOR, UNDISPUTED 3 and that MORTAL KOMBAT short.

It’s not a slick movie. Some things are a little awkward, like the way that Besouro’s friend asks him “shouldn’t you be watching the master?” at the exact moment when the master is about to be assassinated. Seems a little coincidental. This is not one of those stylish, intoxicating Brazilian movies like CITY OF GOD, it feels a little more home made. The real Besouro travelled around alot, but this looks like a pretty low budget movie so they have it take place in this one area. It would be better if it had the scope of IP MAN, and the fights definitely aren’t as sophisticated as the ones in that movie. But for me it’s enjoyable because of the uniqueness of its content. We’ve seen martial arts used to defend the defenseless, but it’s extra satisfying in the context of black almost-slaves fighting off white racist oppressors. What better use is there for awesome kicks?

I like the way they add wirework to an otherwise very down to earth type of fighting. There are long takes and real moves and then every once in a while Besouro can fly. That’s what people started to say about him, so the movie takes it literally. They also said he was bullet proof and could only be stabbed by a certain type of wood called tucum. I imagine the real guy got lucky getting shot at one time and the story got exaggerated, so why not put it in the movie that way? Even Besouro’s inspirational quality is depicted literally, as he’s shown actually possessing people’s bodies and fighting through them.

I can’t claim this is a great new martial arts discovery like ONG BAK or something. I don’t think it will be a big international hit or nothin. But it’s got an enjoyable simplicity, a novel subject and I think this folk hero that I never heard of has a universal appeal. You’d have to be a real asshole not to root for the guy who does martial arts on the slavedrivers.

(But why the German blu-ray is in 3D I cannot explain.)

Here is some information about Besouro

Brazil capoeira
This entry was posted on Friday, March 18th, 2011 at 2:31 am and is filed under Action, Martial Arts, Reviews. You can follow any responses to this entry through the RSS 2.0 feed. You can skip to the end and leave a response. Pinging is currently not allowed.