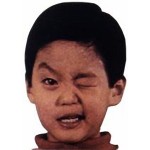 I think this sensei is the same guy he’s been feuding with all throughout the series. At any rate, the guy pretty much tells Oyama that he’s an asshole for going around picking fights, because that’s against the whole idea of karate. And it’s a good point. Still, the sensei agrees to a fight, sort of. He’ll fight Oyama, but first Oyama will have to fight 100 of his students. Ha ha ha. 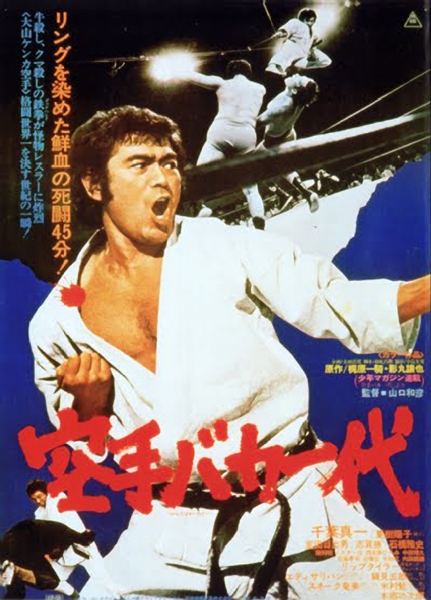 Of course he doesn’t expect Oyama to accept. But he does. “As long as you are number 101.”

And the great thing is you really get to see him fight all these guys. I mean, I didn’t count if it was actually 100 guys, but it’s definitely up there. Of course, for artistic purposes, he defeats most of them in one or two blows. But they all gang up on him and he takes them down one by one. After a while they resort to dirty tricks, they dump a bunch of oil on the ground TRANSPORTER 1 style and put sand on their feet so they can stand up but Oyama can’t. (This trick was also used in COCKFIGHTER, the guy who has his chickens fight on a slick linoleum floor and coats their feet with rosin.)

So you think maybe this will end the fight until he can come back later for revenge. But that would be underestimating Oyama. He falls down but he starts grabbing people by the legs and wrestling them to the ground. Then he basically just creates a pile of karate guys and stands on them, because they’re not slippery.

And he does other tricks – climbing on the wall, tying their black belts around his feet, etc. Until finally the sensei grows some balls and decides to take him on. And the fight ends with the sensei leaning against a wall with blood dripping out of one eye. The students all try to stand up but their muscles are shaky, and they run away in fear as Oyama walks by them shouting, “You got it? That’s Oyama karate!”

And that’s just the first scene.

Some people might be disappointed because in KARATE FOR LIFE he doesn’t fight an animal. Obviously there’s alot of different paths they could’ve chosen, KARATE GORILLA FIGHTER being an obvious one. Or they could go a little more abstract and make it KARATE KILLER BEE FIGHTER. Or KARATE WHALE RIDER. But instead they went with KARATE WRESTLER FIGHTER. We don’t see Oyama get drunk as much in this one but in the opening he and his posse have run up a huge bill at the bar and have no money to pay for it. Then a rich dude comes in and starts literally shoving a bunch of money in their faces saying “Recognize that? It’s money.” He convinces Oyama to fly out to Okinawa for a wrestling gig. They got Japan’s best wrestler and Japan’s best judo fighter, and the three of them will be the Yamashita Brothers. The judo guy won’t give Oyama the time of day and wants to turn down the offer, but the promoter convinces them that since the match is for American GIs it will humiliate all of Japan if they back out.

So alot of the movie is about wrestling and how Oyama is supposed to lose but every time he gets in the ring he’s too stubborn to throw the fight. So the the gangster promoters want to kill him and through all this danger he and the judo guy become buddies. So in this movie he befriends a judo master, a wrestler, a hot alcoholic suicidal girl with tuberculosis, her brother, and a gang of Hiroshima orphan pickpockets. Once again there is tragedy and he has to transport a body to a grave, but this time it’s super badass because he’s buried the body and dramatic music plays and suddenly the judo master just walks up and without saying anything they go to where they have to go to beat up the wrestling promoters (I think) and the sensei from the beginning, who now has an eyepatch. And there’s a fight in a maze of mirrors which was probaly the inspiration for the scene in ENTER THE DRAGON, even if this one came out four years later. Sonny Chiba probaly had been planning it for five years is my guess.

This movie is a whole hell of alot of fun but I’m not prepared to say it’s better than the other two. In some ways it seems like they have further perfected the formula at this point, but on the other hand they don’t get as much emotion out of his relationship with the kids as in the other two. And there’s one major misstep I think: the first time he gets in the wrestling ring he’s all scared and he runs around in a panic until his partner tells him it’s okay to use karate. I don’t mind a character being scared (John McClane is scared shitless all throughout his trilogy) but this scene just doesn’t seem to match the character. The Oyama we know, even if he thought he was gonna get his ass beat, he would stand there and take it. He wouldn’t run around in circles and hop out of the ring and shit. It’s like he’s possessed by the ghost of a sissy. Other than that one scene though, I enjoyed the movie.

At the end Oyama practices karate on the beach, which I’ve noticed is something he enjoys, and the last line of the movie is “There is no end to my way of karate.” So the trilogy is over but the karate lives on in the world around us, in the air we breathe, and most of all in our hearts.

karate Sonny Chiba
This entry was posted on Monday, June 26th, 2006 at 10:23 pm and is filed under Action, Martial Arts, Reviews. You can follow any responses to this entry through the RSS 2.0 feed. You can skip to the end and leave a response. Pinging is currently not allowed.