Is it just me, or do some of these movie titles start to blend in together after a while? The ones I have trouble with are: I’M STILL HERE, I’M NOT THERE, LET ME IN, and NEVER LET ME GO. Well, now that I’ve actually seen one of these maybe I’ll remember which one that is and it’ll help me straighten out which is which between the other ones by narrowing the choices a little. I hope so, because I’m not sure what else I got out of this one, exactly. I mean, I got something, I think. Just a something that’s hard to identify. 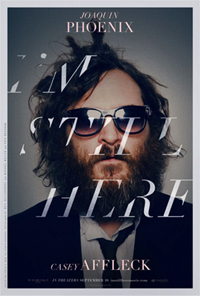 I’M STILL HERE (or possibly I’M NOT THERE) is the fakumentary/performance-art-project-souvenir-DVD where Joaquin Phoenix (Joaquin Phoenix) decides to retire from acting to focus on becoming a rapper. I mean, really what he did was say in a couple interviews that he wasn’t going to act anymore, then do the funny appearance on Letterman that caused all the idiots of the gossip world to pretend they didn’t understand what joking around on a talk show looks like so they would have one more worthless bullshit topic to waste away valuable life on, in this case the question of whether or not “it” was a “hoax.” I hope it’s not disappointing to anyone but yes, it was a “hoax” I guess, if pretending to be a goofball on Letterman counts as a hoax. Where was the TMZ when Bill Murray went on there claiming he adopted a panda? They should’ve gotten to the bottom of that one. And Crispin Glover kicking his shoe. And of course the Andy Kaufman ones. Wait a minute, does this count as a hoax:

Anyway the movie has Joaquin in improvised scenes with his assistants, publicists and others as he finishes promoting his “last movie” and tries to get P. Diddy Combs to help him with his album. It’s the very definition of self indulgent

[self-in-duhl-juhnt, self-]
–adjective
1. indulging one’s own desires, passions, whims, etc., esp. without restraint.
2. characterized by such indulgence.
3. the movie I’m Still Here, if that’s the one with Joaquin Phoenix. Or is that the remake of Let the Right One In? I can never remember.)

but it’s not self congratulatory. From the early scenes where he whines that “my entire artistic output has been fraudulent”, to the part where his friend gets pissed and shits on his bed while he’s sleeping in it, to the part where he has the limo pull over so he can cry about his music sucking and that he ruined his life, he’s always the buffoon. He gets fat (not sure how, they don’t show him eating a bunch of donuts or anything) and grows his hair and beard out so even when he’s wearing a suit and tie he looks like some sort of homeless Amish man or post-apocalyptic biker going to church. Even when they have shots of him smoking and slaving over a pad to write poetry you know you’re not supposed to think he’s cool.

His character in the movie is different from what I’d expect from the guy in WALK THE LINE and GLADIATOR and what not. He’s not an intense, brooding guy at all, he’s a dude, a guy who says “dude” all the time and giggles at stupid shit and likes to humiliate his friends by showing their dicks on camera. He has friends he pays as assistants so they’ll hang out with him, and they’re kind of the audience stand-ins here, looking confused and uncomfortable but trying to be supportive. They know what he’s doing is a bad idea, but they don’t want to be the one to interfere.

I’m not sure if it’s supposed to be a critique of celebrities in general, or a self-critique, or what, but it portrays him as a guy who thinks he’s a great friend but is actually a bad one. He thinks he’s doing his buddy a favor by “throwing him some bread here and there” to hang out with him, even though that means taking him out of sober living to snort lines of coke in front of him and make fun of him for not joining in. And also repeatedly demanding that he make a snow angel until he does, and then laughing at the alleged poor quality of his snow angel.

It’s a little disturbing to see the drug stuff, considering he had a brother who was a celebrity that died so young of an overdose. But maybe that’s his point, maybe he really does that stuff and hates himself for it, I don’t really know. It’s hard to tell.

There is actually alot of stuff in here that I thought was mildy, dryly, not necessarily laugh-out-loud funny, but sort of amusing to me personally. Like in GET HIM TO THE GREEK Mr. Combs is the best part. Joaquin is funny as he pathetically goes to New York and then Miami just waiting for Diddy to have an opening to meet with him, then shows up too late and misses him, then shows up at his hotel room and doesn’t know what to say to him. Also, the awkwardness of not knowing what name to address him as. Diddy? Mr. Combs? And Diddy’s expressions as he listens to Joaquin’s demo are pretty great.

But come to think of it Diddy is still only the second best part. The best is actually when Edward James Olmos shares some wisdom about the two of them as drops of water on top of a mountain and maybe they have to evaporate to get closer to God. When he says it it sounds amazing and deep and it sounds like ridiculous gibberish later on when Joaquin does a terrible job of paraphrasing it to his friends and they have no clue what he’s talking about.

Also I liked when he told his entourage “this is not my night, this is our night. JP is all of us.” And when a scene of him on stage rapping at a club in Vegas cuts to him leaving as a young security guy (I think a real one) says supportively, “well, I liked it.”

Oh yes, about the rapping. He’s probly better than Bulworth. He has terrible anunciation and corny lyrics, no flow at all, no stage presence, and it’s hard to understand what he’s talking about, but at least he doesn’t adopt an accent or very much slang. And unlike BULWORTH you don’t have to hear that much of it. Since it’s supposed to be bad music they don’t make you sit and listen to it very much. Except when Diddy has to sit and listen to it (and then wave them to the next track). In a way you could say that the Joaquin character shows true respect to hip hop, because as terrible as he is at least he sees it as a form of expression and not a specific genre where he has to appropriate shit from other cultures or imitate phrases and themes that are popular with other rappers at the moment. When Diddy talks about hits Joaquin gets embarrassed and says he’s looking for “a place of pure exploration.”

Unfortunately I think the movie itself is pure exploration too, and not the kind of exploration where you end up finding a new island with a bunch of gold on it. They had this topic and style they wanted to mess around with it but it seems like they didn’t have their sights set on any specific target so they didn’t come very close to hitting one. It probly says a few things about celebrity entitlement and what not, but I’m not sure either I or the makers of I’M STILL HERE or especially the makers of NEVER LET ME GO know what it is.

The movie doesn’t make me think less of Phoenix. It does show a certain fearlessness and self awareness that’s respectable, and a facet of him as an actor that I definitely haven’t seen before. But it’s not a very good movie. I can’t in good conscience recommend it to anybody. But I guess if I did recommend it and they hated it I could pretend that I meant the Bob Dylan one with Heath Ledger, that’s supposed to be good.

Casey Affleck Edward James Olmos fakumentary Joaquin Phoenix P. Diddy
This entry was posted on Tuesday, November 23rd, 2010 at 2:55 am and is filed under Comedy/Laffs, Reviews. You can follow any responses to this entry through the RSS 2.0 feed. You can skip to the end and leave a response. Pinging is currently not allowed.