THE LOST MAN is a 1969 Sidney Poitier heist movie, a pretty obscure one, never released on DVD. Maybe if it was better known then Tony Scott and Denzel would do a juiced up remake. But actually it’s already sort of a remake, based on a novel that was made as ODD MAN OUT in ’47, but that version had James Mason as an IRA type, this has Poitier as a Black Panther type.

He plays Jason, a black militant ready to sacrifice all for the cause. I’m not sure how much he’s recognized within the movement. He’s not a figurehead or anything, but he leads a small group of men who definitely regard him as the man. He’s planning a payroll robbery so they can give the money to the children of imprisoned activists. Not everybody seems completely sold on the idea, but he sort of scares them into it.

In the opening he and his team sit in a car watching a protest organized by councilman Dennis (Al Freeman Jr., the guy who played Elijah Muhammed in MALCOLM X). They watch what the cops do, then they leave. Poitier is real cold and stoic. He doesn’t take his sunglasses off until 20 minutes in, I honestly started to wonder if he was supposed to be blind. That would make the robbery more impressive. 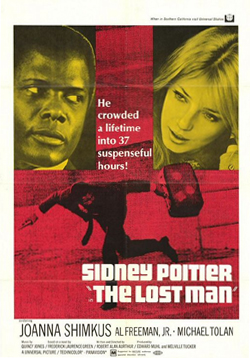 The robbery is clever because it takes advantage of two racial conflicts. 1, they organize a protest at the same time as the robbery knowing full well that every cop on the force will be there to harass them. Two, they show up in suits and ties at the place where some council or committee meets with the white people, and the white secretary lets them in. Their whole plan is based on the assumption that she’ll see a bunch of black guys in suits and think it’s the usual guys. And it works.

But the thing goes south when a security guard senses that Jason wouldn’t really shoot him, takes a shot, and inspires him to actually shoot. So Jason gets wounded and kills an innocent man. Then he ends up stranded in the city. He goes to a movie, forces his way into Vonetta McKee’s apartment, etc. Luckily there’s another sweaty black guy in a suit running around with a briefcase who he gets confused with, that buys him some time.

Meanwhile the rest of the team (including Paul Winfield from WHITE DOG) fend for themselves. They take kind of an OUT FOR JUSTICE approach, instead of trying to get away they just go to a whorehouse and enjoy themselves. It goes about as well as you’d imagine, although not as badly as it does for the guys in OUT FOR JUSTICE. Less pain, I think.

Of course this is just a couple years before the birth of the blaxploitation movie, and the perspective is completely different. You can tell it’s made by white people, not Melvin Van Peebles or somebody, because even though it makes Jason sympathetic they thought they had to stop short of endorsing him, even as an anti-hero. So the cop that’s after him is a reasonable white man who doesn’t want to have to kill anybody. Then again the movie does spend more time with the young white beauty that obviously has a crush on him than with the black one. Of course they don’t get it on or anything, but there’s definitely implications of a heavy attraction there. (And I guess it was real because the white lady is Joanna Shimkus, later Poitier’s wife and mother of Sydney Poitier from DEATH PROOF.)

It’s not a bad movie but I think it’s kind of what baseball metaphorists call “a miss.” The poster and VHS cover say “He crowded a lifetime into 37 suspenseful hours!” and show him hauling ass with the case full of money, as if he’s gonna be running around the city having to go through hell to get out of this mess. It’s not that exciting. It’s really more of a relaxed tour through different safehouses and hoping he can get on a train or a boat or something before some dick betrays him. There’s not as much tension or momentum as there could be. The failed robbery part is pretty exciting though.

The director is Robert Alan Aurthur, who only directed this one movie but wrote a ton of them including FOR LOVE OF IVY, GRAND PRIX, ALL THAT JAZZ and an episode of Playhouse 90 that got him sued by Ray Bradbury. Also he was Bea Arthur’s first husband and gave her her name, although she refused the extra ‘u.’

The music is by Quincy Jones. It’s good but not real memorable, except to those of us who recognize it from this Ice-T song:

Actually now that I’m listening to it again I think it is pretty cool. Let’s go out just appreciating that in context from the score:

heists Paul Winfield Quincy Jones Sidney Poitier Vonetta McGee
This entry was posted on Thursday, September 16th, 2010 at 11:34 pm and is filed under Crime, Reviews. You can follow any responses to this entry through the RSS 2.0 feed. You can skip to the end and leave a response. Pinging is currently not allowed.

25 Responses to “The Lost Man”