Vern has witnessed WILD THINGS FOURSOME (get it, it means part 4)

Didn’t get a chance to link this earlier, but The Ain’t It Cool News is running my review of the new straight to video WILD THINGS sequel. It really is called WILD THINGS FOURSOME. It’s easy to assume they only made the movie in order to use that title, but it actually kind of seems like the 4th person in the foursome (not pictured) was added in at the last minute. She’s barely in the movie at all.

By the way, two or three of the talkbackers there remind me how cool you guys are. Good job being cool, everybody. 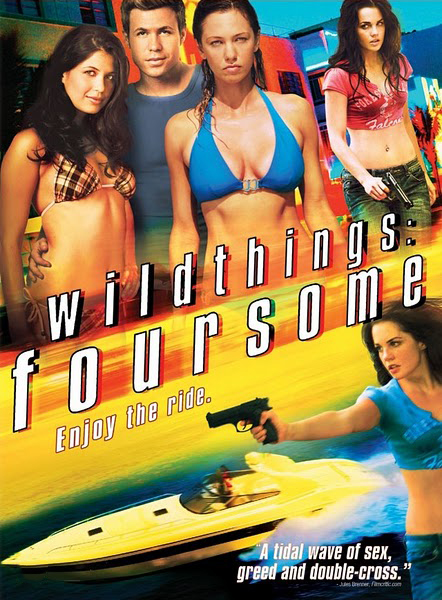 WILD THINGS 2 and 3 were direct to video, and the main thing I remember is that I watched them. In that same tradition comes the fourth installment, tastefully titled WILD THINGS FOURSOME, and available on the DVD and the Blu-Ray June 1st.

This one begins promisingly. At a huge mansion pool party hundreds of beautiful twentysomethings in swimsuits watch the male lead win an intense foosball game. There are dynamic shots all aorund him and from inside the table and everything, and when he wins (SPOILER) he raises his arms like a boxing champ. It seems just like that movie NEVER BACK DOWN except instead of the rich bully kid being good at MMA it’s fucking foosball. He starts talking about a $10,000 bet but unfortunately it turns out to be on a speed boat race, and foosball never comes up again. Too bad, because there aren’t enough high stakes foosball movies these days, in my opinion.

Anyway his race car driver dad is killed in a suspicious crash, there are some complications involving the will, there is some scheming, brief nudity, etc. Somebody’s definitely up to something but the mystery is who all is in on it (SPOILER: everybody is).

I don’t really get the philosophy behind these sequels. They’re all just not-as-good rehashes of the first one, no attempt to try anything radically different. You can’t compete with the first one, so they’re content to just trail along far behind. The schemes are different, but there’s always seduction, betrayal, everybody in on it, which was a surprise the first time but this fourth time, not to speak for everybody, but I’m pretty sure most of us have caught on to the formula. The most blatantly rehashed scene is the famous Richards/Campbell/Dillon threesome, which in that one was the funniest blunt way to reveal they were conspiring together, but by now is just expected, like pranks in a POLICE ACADEMY sequel.

Not to piss on anybody’s parade but I gotta say, man, I don’t think one on three is that good an idea. It’s an impressive sight, but it’s alot of pressure for one dude. I’m not naive, I know the girls would probly take care of each other more than the guy would. But still – if it’s worth doing, it’s worth doing well. I’d want to hold up my end of the bargain, and I think that would be challenging. I’m not saying I couldn’t pull it off, I’m just saying it could go either way. I mean, I know you guys all are super-studs, because why would you lie about something like that on the internet? But personally I’d feel more comfortable sticking with the traditional two or less partners.

Hell, even if it’s to celebrate a criminal conspiracy – you could always have two different meeting times at the hotel, split it up. You have a one-on-one to warm up and then a threesome later on. Or vice versa. Of course, if you have to do the pouring-champagne-on-boobs thing, saving half a bottle for later would be tacky, in my opinion. You’d have to splurge for two bottles. But you’re celebrating getting a bunch of money anyway, I think you can afford it, so that might be the better tactic. Oh well. I guess I’ll cross that bridge when I get to it.

Pretty much all of the characters are intentionally hatable. Some of it is funny, but smart enough to keep a straight face and leave it ambiguous how serious it’s supposed to be. I like the scene where two characters are getting married as part of their scheme and as they’re declared husband and wife they look across the property to make eye contact with another character outside the gate giving them the stink eye from inside a yellow sports car, and then she drives away. That’s how it is in Florida, always some bitch in a yellow car waiting around watching and then she drives away.

They do a good job of making Blue Bay, Florida the vapid millionaire beach community portrayed in part 1, but strangely there’s a scene where the police chief claims that it’s a low crime area where a noise complaint is about the hardest thing the cops usually deal with. What, did they not find all those bodies from those three separate crime sprees beginning in 1998? And they consider all those rape charges to be misdemeanors? I don’t get it.

The best thing about the movie is John Schneider as the lead detective on the case. Somehow the guy from DUKES OF HAZZARD provides a little integrity. It took me a minute to recognize him, so I already decided I liked him before I could hold his TV background against him.

To answer your question, yes, they show some boobs, and the girls have nice butts. I think they could’ve had more toplessness though, considering the male lead stays shirtless for most of his part, beginning with the opening scene where he proposes a shirts and skins foosball game with himself as skins. He stays loyal to that team for the rest of the movie. He might as well be in a Tarzan movie considering how rarely he wears a shirt. Anyway, it’ll do in a pinch for teens who can’t get around Net Nanny, but for adults I recommend real porn.

WILD THINGS: FOURSOME is mildly amusing, but mild amusement is not really that big a commodity these days, in my opinion. Doing a part 4 to this is like doing that foursome: tempting, but hard to pull off. I hope if they keep doing these they’ll find somebody who actually has a good idea how to do it as funny and unexpected as the original. Something that continues in the same spirit instead of just rehashing with an extra pair of tits.

DTV DTV sequels John Schneider
This entry was posted on Tuesday, May 4th, 2010 at 8:17 pm and is filed under AICN, Reviews, Thriller. You can follow any responses to this entry through the RSS 2.0 feed. You can skip to the end and leave a response. Pinging is currently not allowed.

54 Responses to “Vern has witnessed WILD THINGS FOURSOME (get it, it means part 4)”