The opening murder is a tour-de-force, it actually kind of creeped me out how fetishistically it captured every detail of the murder scene. It starts by showing this woman in her fancy home, extreme closeups of the objects surrounding her – flower vase, goldfish bowl, kitchen utensils – then every one of them is knocked over in the struggle when an unseen man attacks her. We only see him by the extreme closeup of the eye, which is disconcerting. And it seems to treat the wreckage as a carefully planned art installation. Or some kind of druid ritual. 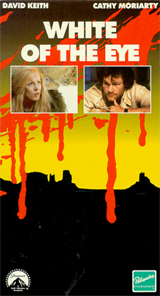 The protagonist is David Keith, the white Keith David, who becomes a suspect because his tires match a print they found, and he was in the area to install a stereo system. He’s an acoustic savant, he even has a weird trick he does where he stands in the center of a room and makes a bleating sound and can tell where exactly your speakers need to go. He’s paid well for his high end customized stereo systems. His wife is played by Cathy Moriarty, a very good performance as a woman trying to get past her husband’s flaws and fall in love with him again. But she doesn’t trust him around other women, and it doesn’t help that he once had an affair with this woman he’s installing a system for and she keeps trying to get with him.

As the murder investigation proceeds there are a whole bunch of suspects in our minds: the old boyfriend we see in flashbacks and dreams, the nervous police friend who has similar tires and says weird things, the jealous husbands, etc. There’s at least one trick worthy of DePalma when we think one character is being murdered but it turns out to be someone else and then we remember the scene earlier where they were in the hair salon talking about how all the women in town wanted to look like this one woman and copied her hair style.

It has a bold, bombastic look, feel and sound that I’m sure influenced Tony Scott and some of those guys, but is more successful than most of them. It’s definitely ahead of its time. The style is kind of bipolar – it’s obsessed with closeup detail, but also with pulling back and showing the land from God’s point of view. It gets involved in the characters and their relationships but also wants to pull back and show them as little specks. If I remember right it even tried to tie what’s going on here to Native American history. It’s not just these people, it’s their entire bloodline.

It feels like some kind of mad genius is at the helm, and I think by the end he loses control. It starts leaning more heavily on the mad than the genius. But it’s striking and unique enough that I recommend everybody see it. (why the hell isn’t it on NTSC DVD?)

SPECIAL SPOILER AREA: the movie lost its grip on me when it revealed who the killer really was. I felt like it was a cheat to make us care about this guy and his struggle to be a better person and then learn it was all a fake-out and the guy’s a psycho. It’s not on the level of HAUTE TENSION as far as plot twist betrayals, but it lowered my opinion of the movie. But I did enjoy Keith’s unhinged performance as he threatens to suicide bomb his own family because his wife found the body parts he was hiding in the bathroom.

David Keith Donald Cammell
This entry was posted on Saturday, February 13th, 2010 at 2:16 pm and is filed under Reviews, Thriller. You can follow any responses to this entry through the RSS 2.0 feed. You can leave a response, or trackback from your own site.

7 Responses to “White of the Eye”