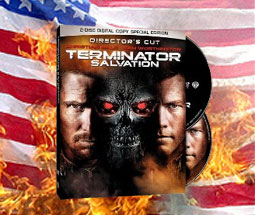 I’m not sure how they released it in other countries, but my fellow Americans will remember that TERMINATOR SALVATION followed the LIVE FREE OR DIE HARD pattern of cutting it to a PG-13 rating in hopes of getting a wider audience (they weren’t interested though – I’m pretty sure it made less money than its three R-rated predecessors).

Not too big of a deal, because the problems that sunk the movie for me had nothing to do with them cutting out the boobs and death, and now that it’s out on DVD I can see what the R-rated cut would’ve been, right?

What they’ve done is release a director’s cut that’s 3 minutes longer. If you have a Blu-Ray player you can find it anywhere, but if you need it on DVD you can only get it at Target. Because that’s who cares about director’s cuts: people who buy their movies at the same place I buy my socks and underwear. If you buy it anywhere else looks like it’s gonna be the PG-13 cut, and most rentals will be that too. Video stores do have the legal right to buy copies at Target and rent them out, but I don’t know how many of them bother with that.

I’m not trying to be a hard-liner against big box stores. I mean, I don’t really like them (and decided to skip Prince’s last album because it was a Target exclusive) but shit, alot of stores don’t sell socks up to my size. I’m not pure. And this would be more infuriating if the movie was better. But I still wanted to call the brothers Warner on this shit because it’s a straight up asshole move to give all the independent video stores and smaller chains only a lesser version to sell this Christmas. I’m sure most if not all of them are struggling in this economy and I want them to stick around. If they all go under and I have to buy movies and music at fucking Target I might just call it quits and move up into the mountains living off berries.

It just occurred to me that maybe I’m contributing to the problem by publicizing the fact that it’s only at Target. But hopefully I can balance that out by making you consider where you choose to buy your goods. By all means buy what you can afford, but if you have options in your area try not to leave the passionate little guys high and dry. I like having independent record and video stores in my neighborhood. These are the entrepreneurs and small businesses politicians always talk about and never actually stand behind. They bring the diversity to our regions and neighborhoods that we claim is what America is all about. And in my experience they’re the people who know what they’re doing and care about doing a good job. They bring in interesting things I wouldn’t know about otherwise. And I don’t think Target could’ve special ordered the BLACK DYNAMITE soundtracks for me and then talked to me about blaxploitation when I picked them up.

I’m sure some of you will say that in your city you don’t really have mom and pop stores or small locally owned chains, just Wal-Mart and strip malls. There are too many areas already where there aren’t many unique businesses for the locals to claim as their own, only the same national chains you see all across the country. That sucks. So if your area’s not like that yet, don’t let it happen. Take advantage of what you have while it’s still there.

Thank you and may God bless America, etc.

p.s. another warning. Don’t rent TERMINATOR SALVATION: THE MACHINIMA SERIES. I thought it was some computer animated tie-in, which it sort of is, but it turns out “machinima” means “using the characters from video games.” Moon Bloodgood’s character stars and she does the voice but after 15 minutes of looking at her emotionless video game face I got the heebie jeebies and had to turn it off. You people who keep saying A CHRISTMAS CAROL or AVATAR looks like a video game are such fucking liars, man. Also, this must’ve been made for the web so it has credits every 5 minutes.

I don’t get it man, from what I can tell using video game characters to do animation is something that kids do at home and put on youtube, it’s a repurposing of copyrighted material for low budget creativity. But a giant corporation creating it as an official tie-in makes no god damn sense. In conclusion, THE MACHINIMA SERIES and the Target exclusive director’s cut – both plots by Skynet. Fuck you, Skynet.

This entry was posted on Wednesday, December 2nd, 2009 at 12:05 pm and is filed under Blog Post (short for weblog). You can follow any responses to this entry through the RSS 2.0 feed. You can skip to the end and leave a response. Pinging is currently not allowed.